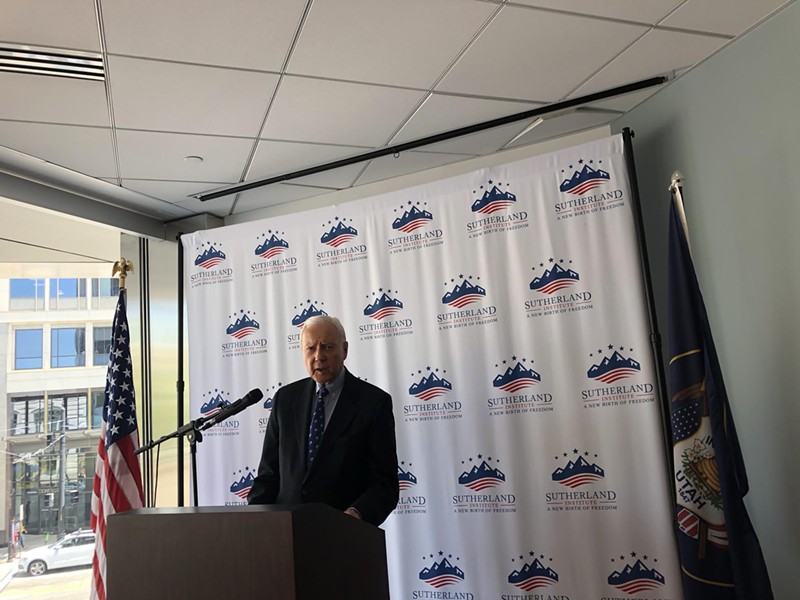 Five months from retirement, outgoing U.S. Sen. Orrin Hatch gave a speech at the Sutherland Institute on Thursday that underlined an important duty he hopes to complete before he leaves office at the beginning of 2019—the confirmation of Brett Kavanaugh to the U.S. Supreme Court.


“In a rational world Judge Kavanaugh would be confirmed swiftly and overwhelmingly,” Hatch said of the process of filling Anthony Kennedy’s seat. “Unfortunately, we don’t live in a rational world, at least when it comes to the Supreme Court.”


First elected in 1976, Hatch has overseen the confirmation of more than half of all federal judges and has been involved in the last 15 battles to confirm justices to the U.S. Supreme Court, including all those currently occupying its nine benches. Last week, he said he was “sick and tired” of partisanship bleeding into the confirmation process of Supreme Court justices, calling it a “dumbass road.”


A few years ago, Hatch spoke highly of Merrick Garland, President Barack Obama’s pick to fill the seat opened after Justice Antonin Scalia’s death, but he wrote in an editorial for the Deseret News that he believed the Senate shouldn’t consider a nominee until after the presidential election, and that he “remain[s] committed to thoughtful consideration of a nominee without the particular divisiveness of this campaign season further politicizing the confirmation process.”

“It was a key position that they wanted to fill before a presidential election, which just wasn’t the right thing to do" —Sen. Orrin Hatch click to tweet

Hatch’s speech followed similar logic, lamenting the “unfortunate politicization” of the confirmation process and the “fishing expedition” of his Democratic colleagues, who demanded “millions and millions and millions of pages of documents” that reflect Kavanaugh’s rulings and his time as White House counsel during the George W. Bush administration.


“This is all a sideshow and they know it,” Hatch said of the Democrats. “Anything they can use to delay or obstruct Judge Kavanaugh, they’ll use.”


Hatch also talked about the importance of judges basing their rulings in the Constitution and the law, not their own political opinions. “There are two kinds of judges: impartial judges and political judges,” Hatch said, calling the latter “philosopher kings” who are “a threat to our very system of limited self-government.”


After the short speech, Hatch took a few questions from the crowd. Asked what needs to change in order for the Supreme Court nomination process to be more rational and constructive, the outgoing senator suggested “more Republicans.”


“We’ve always been very fair to their side,” Hatch said, though he acknowledged “neither side is perfect.”


As for how to justify calling out Democrats for politicizing the confirmation process when Republicans blocked Garland’s confirmation, Hatch said Obama’s nomination of the centrist judge was “right before a presidential election.”


“It was a key position that they wanted to fill before a presidential election, which just wasn’t the right thing to do,” Hatch said.


Hatch said he is not worried, as Democrats are, about Kavanaugh pushing the nation’s highest court farther to the right side of the ideological spectrum. “Do I know how he’s going to vote and how he’s going to write opinions in the future? No, I don’t,” Hatch said. “There’s been some startling decisions over the years by people that I thought very highly of.”


“The best we can do is get people who are honest, capable, knowledgeable, brilliant in this particular case, and just hope for the best,” Hatch said.