A year in, city, county and state leaders note the challenges and tout the successes of Operation Rio Grande. 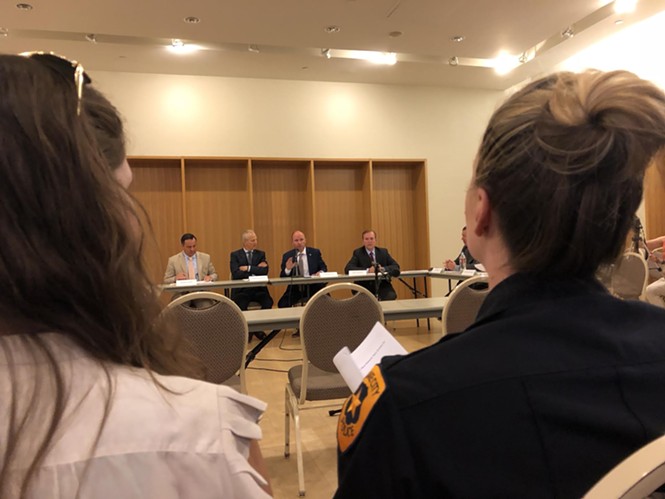 Surviving two overdoses, a Staph infection and an assault that cost her the ability to see from her left eye, Amy Daeschel nearly died multiple times during the two years she lived on the streets.


“I had no hope,” Daeschel told a crowd gathered in a vacant store at The Gateway. “It is only because of Operation Rio Grande and House of Hope that I am here today.”


In recounting her story, Daeschel credited the project with saving her life and helping her stay clean from drugs since Aug. 23, 2017. “For the first time in my life I have purpose,” she said.


Local and state leaders held a long news conference Tuesday afternoon to review the successes and note the next steps of Operation Rio Grande, a multi-agency collaborative project started on Aug. 14, 2017, whose goal is to minimize and prevent homelessness, reduce crime and improve access to resources for people suffering from mental-health crises, including substance abuse, in the city’s Rio Grande area.


“There is no ‘Mission Accomplished’ banner hanging behind us,” Lt. Gov. Spencer Cox said, stressing that the effort is ongoing while praising the five-day decrease in the length of stay at the downtown shelter and the modest increase in the number of successful exits from the shelter to housing.


The operation is split into three phases. The first, focused on public safety, deals with reducing the crime rate. Mike Brown, Salt Lake City police chief, said Part I crimes—robberies, burglaries, aggravated assaults, “the most heinous crimes that we track”—in the district have decreased by 43 percent.


Emphasizing the need for better access to mental-health care and more treatment beds, Salt Lake City Mayor Jackie Biskupski said an intersectional model is needed to provide the most support for the homeless in Rio Grande.


“The accountability and the treatment equals success,” Biskupski said. “This really wasn’t a law enforcement failure, it was a system failure. And the different parts of the system needed additional support.”


Phase 2 is focused on mental health and substance abuse treatment. According to the data tracked so far, Salt Lake County added 243 residential treatment beds in the last year, during which 784 people have entered treatment with county contract providers. In addition, 116 people have pled into the drug court program, 74 percent of whom remain in treatment.


The third and final phase attempts to train and support people as they begin jobs or seek employment. According to data provided on Operation Rio Grande’s website, employers have made 221 jobs available since Nov. 9, 2017, and 106 people have gained employment.


Those in attendance also made note of the challenges facing each of the program’s three phases as it enters its second year. Among those issues are the shortage of detox resources and providers, a need for more health coverage for low-income families, safety issues in the downtown shelter (and its impending closure) and the necessity of education and skill development.


Senate President Wayne Niederhauser also noted a critical issue facing people who want to transition out of homelessness. “Housing is more expensive than it ever has been,” he said.


One of the day’s last speakers, Utah House Speaker Greg Hughes, praised the politically and professionally diverse coalition that has come together and worked on Operation Rio Grande. “I know we need data, we had a lot of it today,” Hughes said before his thoughts turned to Daeschel’s story, a narrative that made real all the numbers presented during the public conference. “But it is about the individual, and there’s more, there’s so many more.”