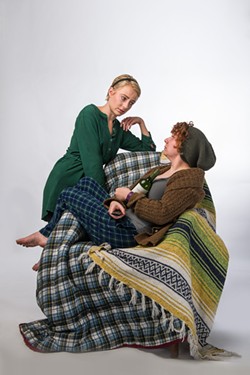 We might have reached an awkward but necessary cultural moment in terms of the representation of mental illness in art: It's clear that certain notions that were acceptable in the past just won't play any more, but it's far less clear what is acceptable. When can we be invited to laugh at symptoms of depression? How do we balance those laughs with a serious look at the pain behind them?

Kim Rosenstock's Tigers Be Still—produced locally by Pygmalion Theatre Company—tries to negotiate that fraught territory with mixed results. The focus is on two families struggling to cope with traumatic experiences. Sherry (Kaitlin Lemon) is finally emerging from a post-collegiate emotional despair to begin her first job as a middle-school teacher and art therapist; Sherry's older sister Grace (Liz Whittaker) has taken up semi-permanent residency on the family couch after catching her fiancé in an affair; their never-seen mother has locked herself away in her bedroom, hating the weight gain caused by her medication for an autoimmune disorder. Meanwhile, Sherry's boss Joseph (Lane Richins) and Joseph's son Zack (Jordan Briggs) respond in very different ways to the recent death of Joseph's wife and Zack's mother.

The real challenge comes in the text, which never seems entirely sure about which of these characters is truly in need of help. Whittaker's performance as Grace includes some wonderful moments of physical comedy, but it's also hard to wrestle real humor out of someone who's drinking down bottles of Jack Daniels with a crazy straw. Similarly, while Lemon nails Sherry's almost desperate determination to steer her life back towards some semblance of normalcy, her perky demeanor doesn't always let the audience into the person she was when she couldn't get herself out of bed. It's a tale with enjoyable moments, yet one without a clear sense of what it's saying about genuine clinical depression vs. life setbacks that send people spiraling but can be overcome if you just pick yourself up, dust yourself off and start all over again.

Tigers Be Still does find some charming territory in the quest for second chances, even in something as simple as Joseph's memory of being the prom date of Sherry's mother.  That memory gives rise to a lovely flashback sequence, casting Sherry and Zack as their respective same-gender parents, and allowing a unique visual presentation of how events can have ripples into subsequent generations. It simply feels like there are times when Rosenstock wants to be dead serious about damaged people, yet ultimately feels more comfortable cutting the tension with a joke. It's not that Tigers Be Still is insensitive; it's just a play that wants to be a dramedy, but only truly nails the "-medy" part.