Greg Hughes started off a cannabis-centered town hall in Orem on Monday by addressing the elephant in the room: “Everybody thinks that this is a big ruse, that the Legislature is just coming up with a way to placate people or tell them what they want to hear, and that we’re gonna pull the rug out from under them,” the Republican Speaker of the House said of a proposed bill unveiled in early October that serves as a compromise between Proposition 2 supporters and opponents. 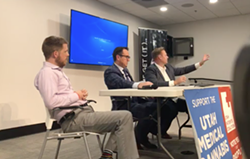 Members of the public questioned Hughes, Utah Patients Coalition (UPC) Director DJ Schanz and Libertas Institute President Connor Boyack for two hours, one week before an election where voters will have their say on Prop 2, a ballot initiative that would legalize medical cannabis in Utah. The compromise came up repeatedly; critics have accused those involved of attempting to suppress voter turnout.


Schanz defended the deal. He said UPC knew legislators have the ability to “change, modify or gut Proposition 2, were it to pass,” so negotiating before the midterms gives the group a say in how it could be altered to minimize the changes. “For me, what’s important is not necessarily Proposition 2, but a long-term, viable medical cannabis program,” Schanz said.


At one point, a man noted his discomfort at the number of times The Church of Jesus Christ of Latter-day Saints has been mentioned in public discussions about medical cannabis in Utah. “I’m wondering, in what other state would we be having a discussion, a political discussion, as you guys defined it, where we would be considering a church?” he asked.


Hughes said he grew up in a mostly Catholic community in Pittsburgh, where that church routinely weighed in on community issues. “It wasn’t seen as an affront, and it wasn’t seen as an attack,” he said. “If I had a religious organization that wanted to backchannel its preference to, maybe, legislative leaders, I would be far more uncomfortable about that, than a very public communication, where people know in a very transparent way where those concerns might lie.”

“You know what the church is for me? The church is my family, members of my family that may have passionate feelings or beliefs, or worries and concerns.” —speaker Greg Hughes tweet this

Boyack and Schanz were more direct. Both acknowledged that the reality of the situation is the LDS church has a lot of influence on this particular topic. “They’re involved, like it or love it,” Boyack said, noting that he will negotiate with whomever necessary in order to secure a program that is in the best interest of Utah patients.


“I just want you to know that when we use the word ‘church,’ I don’t know what image is in your mind,” Hughes said. “You know what the church is for me? The church is my family, members of my family that may have passionate feelings or beliefs, or worries and concerns.”


Echoing comments he made throughout the night, Hughes said there was value in forming a broad coalition among stakeholders, and that an agreement between the parties will serve Utahns well.


“I didn’t get involved in this to protect some institution,” Hughes said of the church.


Question topics ranged throughout the evening, but they eventually wound back to request some type of assurance that lawmakers wouldn’t make changes that could hurt Utah patients. “I hate to say, ‘trust us,’ but we are putting it on the public line that we are going to do this. I wouldn’t want to stand here and make this reassurance to you without meaning it,” Hughes, an outgoing representative, said. “Why would I be here tonight? I mean I’m not running, I don’t have to be here.”


Schanz and Boyack encouraged the crowd to consider what might happen if no deal is reached. “The issue we face is if it’s Prop 2 alone, there are many legislators who want to take out the knives and start whittling away at Prop 2, and there are no promises,” Boyack said. “We’ve come up with a compromise that preserves a very broad program.”