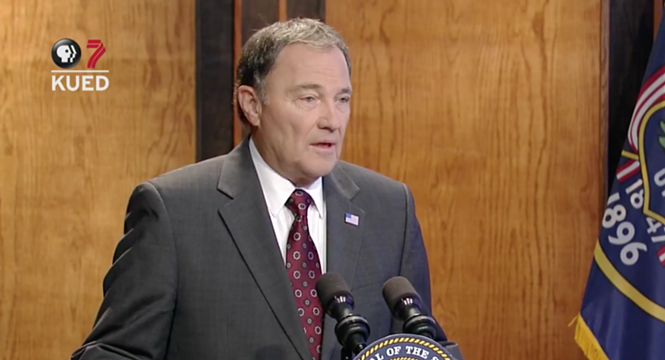 During his monthly news conference, Gov. Gary Herbert acknowledged that he’s received notice of a potential lawsuit from Together for Responsible Use and Cannabis Education (TRUCE) over The Church of Jesus Christ of Latter-day Saints’ role in a compromise bill unveiled last month that would establish a system for distributing medical cannabis in Utah.


Legislators, faith leaders and supporters and opponents of Proposition 2 gathered in the Gold Room at the Capitol last month to announce they’d found common ground in the fight over the cannabis ballot initiative. The agreement would change several aspects of Prop 2, but some supporters of the original bill have publicly argued the compromise preserves a “long-term, viable medical cannabis program.”


According to Fox 13, TRUCE sent a preservation letter to state lawmakers, LDS church officials, the Utah Patients Coalition and Utah Medical Association alleging the church exhibited outsized influence in calling for and crafting a compromise that would “materially alter the initiative statute supported by a majority of voters who passed Proposition 2 in the recent election.”


Herbert dismissed that lawmakers came together at the behest of the church. “I’m the one that calls people into special session. So it’s me doing it, nobody else,” the governor said.

“Is it perfect? Probably not, but that’s why we have a public process that allows us to modify, improve, amend as we go forward." —Gov. Gary Herbert tweet this

Recalling prior news conferences, Herbert said he is not against the concept of using cannabis to alleviate serious, chronic illnesses or pain, but he was against Prop 2 because he worried the lack of oversight would cause the state to “lose control” of cannabis use within its borders.


Herbert said the church does have influence on state politics, since so many Utahns count themselves among its congregation. “But you could say the same thing if you were in Massachusetts about the Catholic Church,” Herbert said. “We have a lot of faith-based organizations that have influence on what we say when it comes to, in fact, significant issues of policy, particularly those that have a moral bent to them.”


Reiterating the value of public input, Herbert reminded reporters that some supporters of Prop 2 are on board with the compromise. He said the agreement gives the state greater control over the quality and quantity of medical cannabis, and ensures Utah will not inadvertently contribute to the black market by allowing patients, as Prop 2 would, to grow their own cannabis if they don’t live within 100 miles of a dispensary.


“I don’t know why anybody would be opposed to this,” Herbert said. “Is it perfect? Probably not, but that’s why we have a public process that allows us to modify, improve, amend as we go forward. But we’re in a good place here.”