About an hour into a legislative discussion on medical cannabis, Rep. Brian King said he wanted to address the elephant in the room: that The Church of Jesus Christ of Latter-day Saints had influenced the “compromise” agreed upon a month before voters passed Proposition 2—a ballot initiative that legalized medical cannabis in Utah. 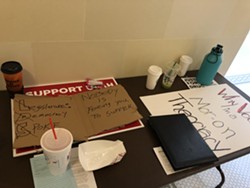 Lawmakers met at the Capitol on Monday for a long-promised special session called to pass the compromise bill that will supersede the medical cannabis ballot initiative voters passed last month. “This is a landmark day for our state,” outgoing Speaker of the House Greg Hughes said. Hughes praised Prop 2 supporters and opponents’ coming together to find common ground on a controversial topic, a rarity in today’s politically polarized climate. “I’m proud of the work that’s being done,” he said. “I’m proud of the people in this room.”


King wound up being one of 13 state representatives who voted against the compromise. Sixty of his peers voted in favor, easily passing the bill to the Senate, which would pass it 22-4. Gov. Gary Herbert is expected to sign it into law.


The compromise differs from the ballot initiative in several key ways. Unlike Prop 2, medical cannabis users would not be able to grow their own cannabis plants if they don’t live within 100 miles of a dispensary. Also at odds is where patients would pick up their cannabis. Under Prop 2, they’d go to a privately owned dispensary; were the compromise to become law, they would go to a local health department that received the medicine from a state-run central fill pharmacy, or to one of seven—or 10, if the state doesn’t set up its central fill within a few years—privately run pharmacies. Critics of the compromise say that could limit patients’ access.


Much of the debate in the House and Senate focused on overruling the people’s will, given than Prop 2 passed with a majority of voters’ support. “The voters have spoken. The only thing we should be doing with Prop 2 is be sure it comports with current existing law,” Rep. Rebecca Chavez-Houck, D-Salt Lake City, said. “I appreciate the work and effort that it took to get to this point, but we don’t need to be here.”


Chavez-Houck introduced a substitute bill in the House that wouldn’t have made substantive changes to Prop 2. Sen. Jim Dabakis, D-Salt Lake City, introduced two substitute bills of his own in the Senate. “To say, ‘We have special knowledge, we know better, we will overthrow the will of the majority of the people because we have special power,’ I think is a level of arrogance we ought not to display to the rest of the state,” Dabakis said, spurning legislators for cutting Democrats out of the compromise talks. “Not just Democrats, but 50 percent of the people in this state feel disrespected today … I hope in future years you will include everybody.”

The Democrats’ House and Senate substitute bills failed. “We have the right to override what the people do by initiative. Now, we don’t do that willy-nilly,” Rep. Merrill Nelson, R-Grantsville, said, defending lawmakers’ tweaking of Prop 2. “The only reason we’re here today is we see errors in the initiative passed by the will of the people.”


Amid all the Republican back-patting for reaching a compromise, some legislators acknowledged that a few things—like added protections for government employees and more oversight of who would be on the Compassionate Use Board—will need to be modified in the upcoming legislative session. Democrats questioned the need to pass the compromise less than a month after the election, given that the general session is a mere month and a half away.


Escamilla said she expects for the issue to be similar to alcohol—a perennial topic debated in legislative sessions. Before casting her “Nay” vote, Escamilla issued a prediction: “We’re probably going to have 10 medical cannabis bills every legislative session for the next 20 years or more.”