And So It Begins | Buzz Blog

And So It Begins

Lawmakers and protestors descend on the Capitol for Day 1 of the legislative session.

As the House and Senate met in their respective chambers Monday afternoon for the first day of Utah’s 63rd legislative session, demonstrators gathered in the Capitol’s rotunda and chanted, “Yes on 3!” Their shouts bled through the walls two floors above, delivering loud and clear an urgent lesson shortly before the elected officials headed home for the day.


“That is exactly the message that the folks up there need to hear,” AARP Utah Director Alan Ormsby said to thunderous applause. 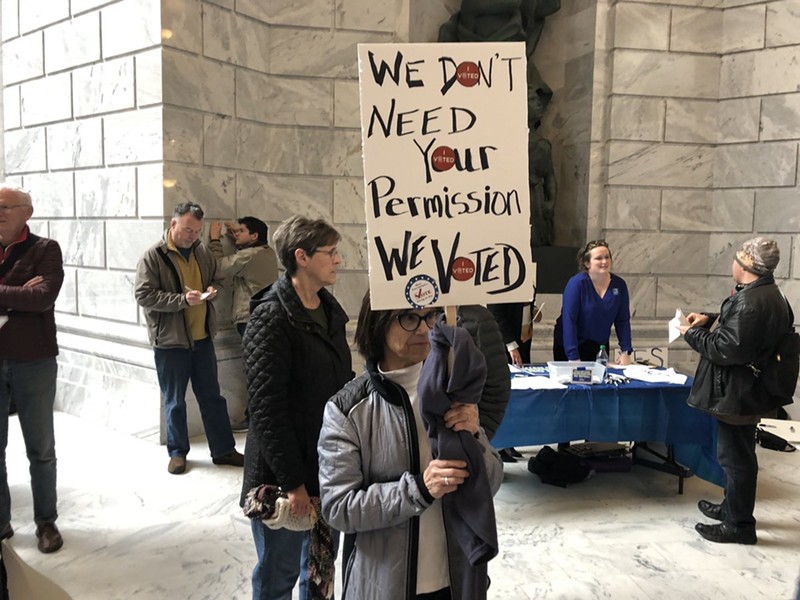 The protestors rallied for Proposition 3, the Medicaid expansion ballot initiative passed by 53 percent of voters last November, hoping it won’t meet the same fate as Prop 2, the medical cannabis referendum that lawmakers amended in a special session last month. Prop 3 was approved in the majority of House and Senate districts in the 2018 midterms. But, in keeping with the Utah way, that didn’t stop Republican leadership from saying they’ll need to change parts of the expansion to ensure the state stays solvent. “As we’ve done the analysis now of the cost of Medicaid expansion in the initiative, we find that after about two years, we don’t have enough money to pay for the additional costs of the state,” Gov. Gary Herbert said last week at his monthly news conference.

Related What's in Our Legislation?: Our annual look at the rip-roaring 45 session days ahead.

What's in Our Legislation?
Our annual look at the rip-roaring 45 session days ahead.
Manager's specials like hidden language in bills and a very loose definition of "separation of church and state" will surely manifest and distract voters from real issues—the meat, if you will.
By Ray Howze, Kelan Lyons, Naomi Clegg and Enrique Limón
Cover Story

Stacy Stanford, one of the rally’s speakers, warned the 300-strong crowd that lawmakers will tinker with the bill. That, she said, will hurt suffering Utahns by making them ineligible for much-needed medical coverage. “We’re not fooled by that, right?” she clamored. “We know that adjustment is a repeal, right?”


Within legislators’ chambers, much of the session’s first day was ceremonial. Farmington and Davis High School students performed the National Anthem in the House and Senate. Lawmakers took their oaths of office and introduced this year’s legislative interns and staff. And former House Speaker Greg Hughes and former Senate President Wayne Niederhauser passed their torches to Rep. Brad Wilson, R-Kaysville, and Sen. Stuart Adams, R-Layton, respectively.


“You should be proud,” Adams told his senatorial colleagues in his opening remarks. “You are a leader in the greatest state in the greatest country in the history of the world.”


Adams encouraged senators to envision a Utah with cleaner air and more affordable health care. “Imagine speaking about the opioid crisis in past tense,” he said. “Now, finally, imagine the Winter Olympics back in Utah.”


Alluding to the recently ended federal government shutdown, Adams enjoined, “We can’t shut down, we won’t shut down. We must come together. Maybe consider a revolution. One that unites us. Unites us to build this dream.”

“The obstacles we face today are different than those faced by the pioneers of the past, though no less difficult in their own right." —Rep. Brad Wilson, R-Kaysville click to tweet

In the House, Wilson issued words of warning to his fellow state representatives about Utah’s continued growth. "Despite our high quality of life and recent success, there are threats to our prosperity that we must be prepared for,” he said, emphasizing issues like air quality, education and affordable housing. “The obstacles we face today are different than those faced by the pioneers of the past, though no less difficult in their own right."


The new House Speaker also called for a record-breaking $225-million tax cut, a deeper slash than what Herbert proposed. That’s a curious cause to champion, considering the governor and lawmakers are arguing the state does not have the money to fully extend Medicaid once the feds’ share of the funding decreases in future years.


Kathy Adams was one of the sign-holding demonstrators who sacrificed her afternoon to send a message to legislators: “We’re watching you,” she said. “We know what we voted on.”


Adams said her involvement in the rally extended beyond Medicaid expansion. She’ll be following bills related to air quality, water and women’s reproductive rights over the next 45 days. She said she’ll be watching lawmakers’ votes on all these bills, not just those related to Prop 3. “The demonstration today reveals a new level of engagement with our government,” she said, “and an acknowledgement that we the people need to affect the change we want to see in our government.”