Ending a “Dangerous and Discredited” Practice 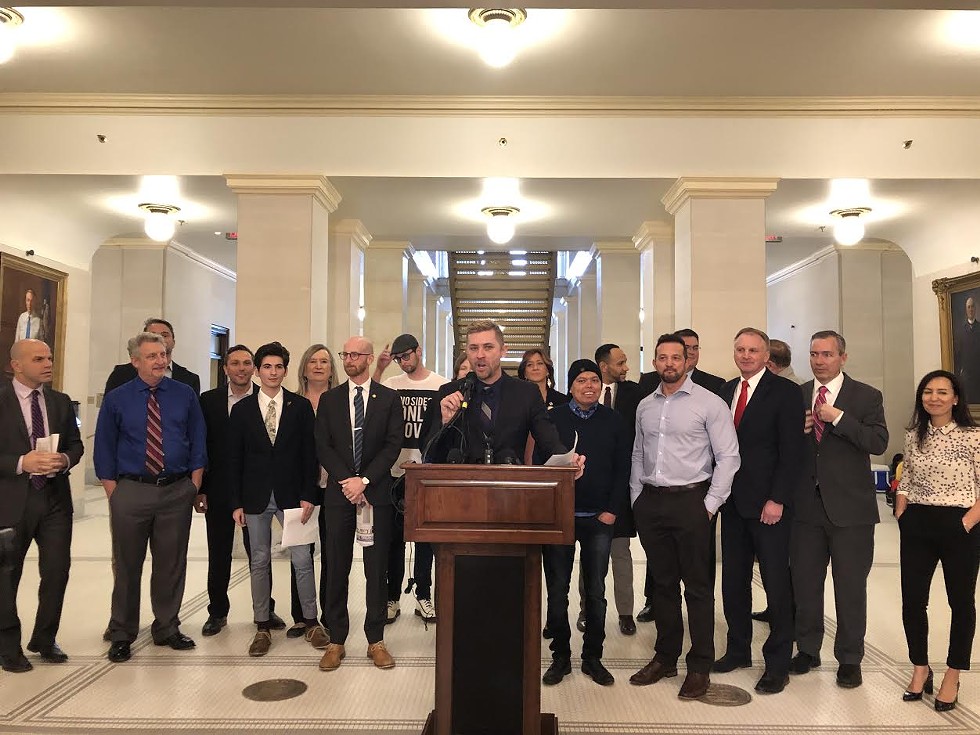 Conversion therapy nearly ended Nathan Dalley’s life. Young and depressed, Dalley thought his attraction to men was the reason behind his mental anguish. His therapist told him to be more masculine, to talk in a manly voice and play sports, and to snap a rubber band against his skin whenever he felt allured to another man.


“Initially, I was relieved there was something I could do to change my sexuality,” Dalley said from a podium in the Capitol’s Hall of Governors on Thursday. But then his depression deepened. He felt isolated from his peers and hated himself, so he tried to overdose on sleeping pills. "The therapy that was supposed to be changing my sexuality made me spiral deeper into depression and anxiety and shame about who I am,” Dalley, now a 19-year-old student at the University of Utah, said. “Kids just like me are not as lucky as I am, and it’s not OK.”


Stories like Dalley’s were the impetus for a bill that would prohibit therapists from practicing conversion therapy—a destructive psychological treatment that attempts to change a person’s sexual orientation or gender identity—on minors. Supporters gathered at the Capitol to celebrate the newly written bill and the effect it could have on LGBTQ youth across Utah.


“We are raising the consciousness of this state on what we can do to help prevent suicide,” Equality Utah Executive Director Troy Williams said.

“This is what Utah does when Utah is at its best." —Sen. Daniel McCay (R-Riverton) tweet this

If passed, Utah would be the 16th state in the U.S. to ban some form of conversion therapy, a practice linked to high rates of depression and suicide among LGBTQ youth. Speakers at the Capitol said passing the bill is critical, since suicide is the leading cause of death for Utahns ages 15-24.


“We protect this community when we affirm, when we accept, when we love,” Taryn Hyatt, from the local chapter of the American Foundation for Suicide Prevention, said. “This practice is unethical, and it cannot happen any longer.”


The bill, titled “Prohibition of the Practice of Conversion Therapy Upon Minors,” is sponsored by Rep. Craig Hall, R-West Valley City, and Sen. Daniel McCay, R-Riverton. In his short address, McCay talked about the importance of showing all children they are valued and loved. “This is what Utah does when Utah is at its best. We come together, we work together, we put our arms around one another, and we try to find solutions,” he said. “It doesn’t matter who you are. You are welcome.”


The Church of Jesus Christ of Latter-day Saints has indicated it will not oppose the legislation.


Notably, the bill would not ban therapists and clinicians from using the therapy on adults, nor would it regulate religious clergy members’ interactions with young LGBTQ members of their flock. And, as the Deseret News reported, none of Utah’s 3,782 licensed psychologists, therapists and clinical mental health counselors identify themselves as conversion therapists.


Clifford Rosky, a law professor at the U, member of Equality Utah’s Advisory Council and author of the bill, hinted that such classifications may be misleading because, “No one advertises themselves as a conversion therapist.”


Rosky said the legislation does not apply to religious clergy because they are not licensed with the state, and the First Amendment protects their right to express their opinions about a person’s sexual orientation. “It is well-settled the state has the authority to determine how mental health care professionals practice their trade,” Rosky said. “It’s very clear they can tell doctors and therapists not to engage in dangerous and discredited practices.”


If it becomes law, Utahns could file complaints with the state’s Department of Professional Licensing. One potential resolution, Rosky noted, is a settlement, but there could be other avenues, as well. “It’s certainly not a crime,” he said. “You could lose your license.”


After the news conference, Rosky told City Weekly that it’s important to see that the leaders of both political parties, mental health advocates and LGBTQ rights groups are coming together to support the bill. “That’s a clear message to everyone in our state that this is a dangerous and discredited practice,” he said.