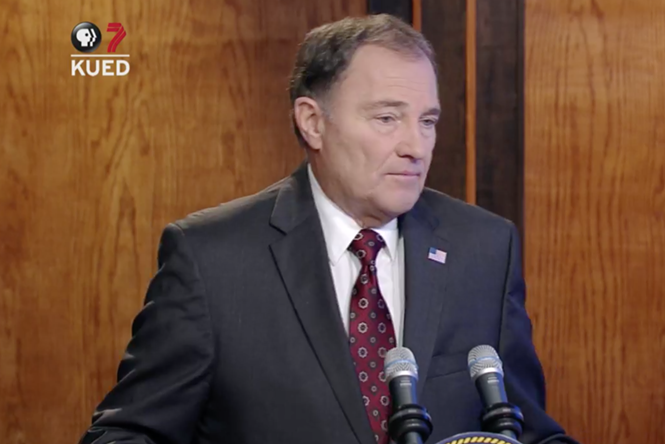 Identifying himself again as a “pro-life guy,” Gov. Gary Herbert said he was open to signing two bills into law that would further limit when a woman could terminate her pregnancy in Utah.


“Of all the issues we’ve ever had, at least in my lifetime, there has been nothing more divisive than the idea of abortion,” Herbert said. “I think the argument is, in reducing the time that’s allowed for an abortion, is because of the advancements of science, and the fact that the viability outside the womb has increased significantly since the original Roe v. Wade decision by courts.”


The House passed House Bill 136, which would ban abortions after 18 weeks of gestation, on Thursday. Herbert said House Bill 166, a House- and Senate-approved proposal that would prohibit a woman from terminating her pregnancy solely because the fetus has been diagnosed with Down Syndrome, would, “send the message that, all life, even if you may be imperfect, and we all are, that’s not a reason or cause to have an abortion.”


Opponents have said both bills could result in hefty legal fees for the state, since it will likely have to defend each policy’s constitutionality in court. Herbert said HB166 contains a provision that would not allow Utah to implement the law unless the Supreme Court has ruled that a similar policy in another state is constitutional. “That will take some of the risk out of fighting that on a constitutional basis,” Herbert said, meaning taxpayers will not be on the hook for a costly legal crusade just so legislators can send a message.


The governor made the comments at his monthly news conference at KUED Channel 7 studios. With just two weeks remaining in the 63rd Legislature, Herbert took questions on controversial bills and explained what he hopes to accomplish in the session’s waning days. The biggest item on his legislative wish list is the modernization of the state’s tax code, which Herbert said will give Utah families a tax cut. “What we’re on the pathway to do is that up to 90 percent of the people of Utah will pay less taxes in the next year than they paid in the past year,” the guv said. “That’s good news for the taxpayer.”


Lawmakers filed a bill Wednesday night that would revolutionize the state’s tax code. The proposal would tax new services while lowering the rates for sales and income taxes. “Any time we have a tax that broadens the base, that by definition means that somebody’s going to be taxed who may not have been taxed before,” Herbert said, expecting special interest groups to hem and haw about the new taxes on their services. “The concern for all of us should be, ‘What is the optimal tax policy, which is fair, has equity across the system, every part of the economy is contributing their fair share, simple to understand, simple to administrate?’”

Lawmakers have been talking about reforming the state’s tax code for three years, Herbert noted. “At the end of day, most people are going to be happy to have tax reform. They’re not going to be so happy if it’s ‘my business’ or ‘my part of the economy that’s going to be taxed,’ but that’s tax reform,” Herbert said. “When we add up the pluses and the minuses, and we end up giving back, say, $200 million in a tax cut, the people of Utah will benefit. We’re going to actually collect less money. It’s that simple. It’s a math problem.”


Herbert pledged that such a law would, “be an across the board benefit to the people of Utah … We’re going to continue to have prosperity in the state of Utah because of tax modernization.”