Cliffs of Freedom: The struggle to tell the story of Greeks fighting for independence | Buzz Blog

Cliffs of Freedom: The struggle to tell the story of Greeks fighting for independence

Director Van Ling on the long road from idea to theaters 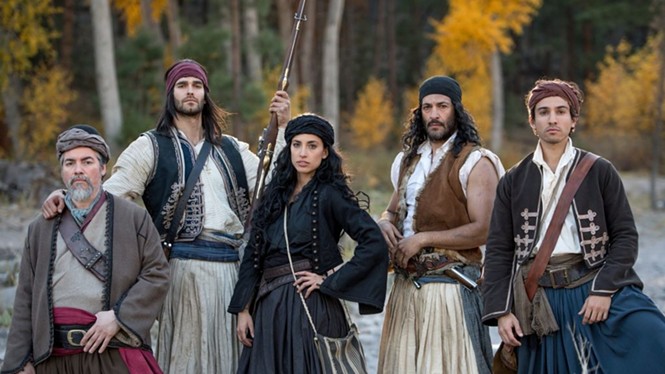 Van Ling realizes that he's not the likeliest person to bring a story about the 19th century Greek War of Independence to the screen. An American of mostly Chinese descent, he says, "I'm about as removed from the Greek experience as anyone could be." And while he has been working in the movie industry for 30 years—mostly in visual effects, including working with director James Cameron on blockbusters like Terminator 2: Judgment Day and Titanic—he had never directed a feature film before.

Yet Ling was instrumental in the process of getting Cliffs of Freedom from an idea by Greek-American writer Marianne Metropoulos into production. Though built on real events, it tells the fictionalized story of Anna Christina (Tania Raymonde), a young woman in a Greek village circa 1820 who becomes part of the "Friendly Society" Greek resistance to the occupying Ottoman Empire, even as a romance develops between her and an Ottoman captain (Jan Uddin) working from within against tyrannical rule.

It's an epic-scale story told on a modest budget, but Metropoulos had encountered nothing but 15 years of "no" while trying to sell the concept to producers. In 2010, producer Casey Cannon brought an early version of the script to Ling, hoping to get some feedback on solving story problems. "I would say, 'Maybe you could have them do this, or this could happen.' Casey would come back with, 'Can you write that down for us?' Then, 'Can you write the scene for us?' Within a couple of years, I’d done a full page-one rewrite."

Still, Ling wasn't being considered for the director's chair until an attempt at resourcefulness turned into an opportunity. When the producers of Cliffs of Freedom realized that era-appropriate costumes and props didn't really exist in Hollywood prop houses—because nobody had really done a story set in Greece in this era—they knew they would have to create everything from scratch, and looked for a way to amortize that cost over another production. So in 2014, Ling came up with a pitch for a TV series that would be set during this period, and spent four days shooting test-reel footage in California. That footage impressed Metropoulos enough that as Cliffs of Freedom found its way out of development purgatory and to a green light, they asked Ling to direct it.

"I always thought I’d love to try my hand at directing some things," Ling says. "Being involved as a writer was a great creative thing, trying to figure out character issues and story issues. But I always thought, 'This is a Greek story, there should be a Greek director.' It's very proud history, with a lot of passion. But I had to get in that mind set because I was writing it."

Though much of his high-profile Hollywood experience had been on big-budget films, Ling didn’t find it hard to work on a production that would demand the look of big historical epic but a cost-effective approach. “If you start with a giant production, you can get pretty spoiled,” he says. “But Jim Cameron started off doing Roger Corman films, where he had to use ingenuity where he couldn’t use money. I found that it’s true whether you’re making a big-budget film or a small-budget film, you’re having to solve story problems. … It’s a matter of trying to do the scope that’s necessary for the film, but do it most efficiently.”

You certainly wouldn’t get a small-budget feel from a cast that includes in supporting roles Academy Award-winner Christopher Plummer, Tony Award-winner Patti LuPone and Titanic’s Billy Zane. “I’d like to think that it came down to the script,” Ling says “I wear a silicone band that says, ‘All the visual effects in the world can’t hide bad storytelling.’ It’s got to be a solid story. Fortunately, that appealed to Christopher, and Patti, and Billy, who is Greek, by the way. Also, I hope in talking to me, taking a risk on a first-time director, hopefully they were able to get what I wanted to do.”

At the center of that story, there would be its fictionalized heroine, Anna Christina. Centering a woman was a key part of Marianne Metropoulos’ original vision, which Ling suggests was an attempt by Metropoulos at “making some statements” about the patriarchal culture in which the story is set. Yet Ling also researched many of the real-life events that inspired this narrative, including a mass-suicide of women who refused to be taken captive by Ottoman soldiers. “I wanted to look at what happens if you start with what it was like [for a woman in that time], and how can that change,” he says. “Can she start off as this dutiful daughter, then become a symbol for all the guys to rally around that doesn’t have to do with her gender? It isn’t just about the bravery of soldiers, but about the strength and bravery of women.”

Cliffs of Freedom is scheduled for a one-night-only screening at Megaplex Gateway on Wednesday, May 8. Reserve tickets here.