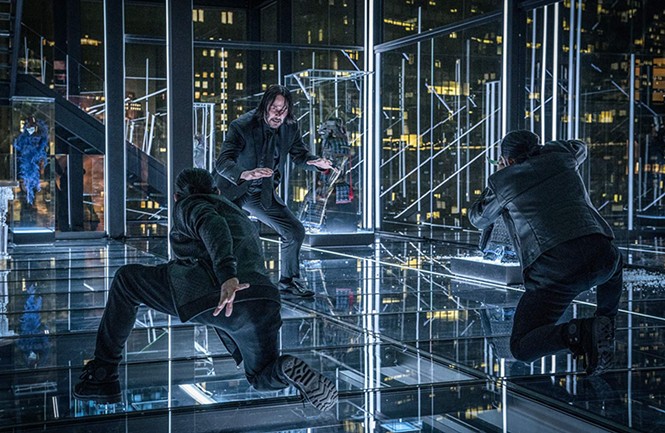 A Dog’s Journey **
It’s DoesTheDogDie.com: The Movie. Yes, the dog dies. Over and over again, in fact. That’s no spoiler, and kind of the whole point of this sappy “tail,” a sequel to 2017’s A Dog’s Purpose, about how a boy who grew into Dennis Quaid was cute-stalked through his entire life by a dog called Bailey (the voice of Josh Gad). Every time the dog died and was reborn into a different doggy body, he (or occasionally, she) tried to get back to Ethan. Here, Ethan commands the latest reincarnation of Bailey—Ethan has sorta caught on to what’s happening—to watch over his step-granddaughter, CJ (Kathryn Prescott). Movies don’t get more inoffensively inoffensive than this, in which there isn’t anything that a canine friend cannot put right, from grief and trauma to potentially fatal illness—such as cancer, as CJ’s bestie Trent (adorable Henry Lau) endures. People may suffer the biggest, most profound of problems, and yet all is put right as long as a dog is by one’s side. Is that even inaccurate, though? I’m not crying, you’re crying. Opens May 17 at theaters valleywide. (PG)—MaryAnn Johanson

John Wick: Chapter 3 – Parabellum ***1/2
The John Wick franchise might owe the lion’s share of its success to the crunching action sequences, but the terrific fight choreography is only part of a three-legged stool that also includes the rich mythology of its contract-killer subculture and the ferocious sense of purpose driving the central character. The latter has lost a bit of focus over the last two films, but there’s more than enough of the other two in Chapter 3 to remain thrilling. It picks up mere minutes after Chapter 2 ends, as John Wick (Keanu Reeves) finds a $14 million bounty on his head for violating the revered rules of his one-time superiors. What follows is largely a gleeful series of set pieces involving John assassinating his would-be assassins, including the hilariously violent consequences of everyone finding themselves in a room full of knives. Yet the details of this underworld are still terrifically realized, including an Adjudicator (Asia Kate Dillon) meting out punishments to violators, and the wonderful realization that there are John Wick fanboys among his fellow killers. While our taciturn hero’s motivations aren’t particularly engaging this time around, it’s always a delight to watch him kick ass in this weird world. Opens May 17 at theaters valleywide. (R)—Scott Renshaw

Sauvage / Wild ***
Léo (Félix Maritaud) appears to be at a doctor’s appointment at the outset of Camille Vidal-Naquet’s gritty character study—but it’s a roleplay, part of 22-year-old Léo’s life as a gay sex worker in Strasbourg, France. The narrative that follows is mostly episodic, following the illiterate, for-all-practical-purposes homeless Léo through his days and nights picking up tricks, and his unrequited infatuation with fellow prostitute Ahd (Eric Bernard). Vidal-Naquet creates a compassionate portrait of the community of mutual support among these sex workers, including warning each other about potentially violent clients and rousting the Serbian immigrants trying to undercut their prices. Yet mostly it offers a bleak vision of Léo’s life, facing health problems, hunger and the prospect of dangerous encounters, while it’s obvious that all he wants is some kind of human connection. Maritaud’s performance evokes that mix of streetwise kid and eager puppy, and even as some of the individual episodes begin to feel repetitive, it’s hard not to feel compassion for someone who needs someone to hold him, but might not believe he deserves to be held. Opens May 17 at Tower Theatre. (NR)—SR

Fair warning: This adaptation of a young-adult romance by Nicola Yoon (Everything, Everything) announces its intentions when high-school seniors Natasha (Yara Shahidi) and Daniel (Riverdale's Charles Melton) are brought together by the phrase “Deus Ex Machina.” This is a story about the magic of fate and destiny and strange coincidences, as ways to deal with the harshness of reality—because on the day that they meet cute in New York, Jamaica-born Natasha faces deportation with her family, and first-generation Korean-American Daniel is scheduled for a college interview directing him to a future his parents expect of him. There’s an interesting tension in Ry Russo-Young’s direction between twinkly “New York is also a character in our story” rom-coms and darker undertones, as the airborne establishing shots of Manhattan skylines often tilt on their axis. And while the background of the two leads provides depth, this still works primarily because of old-fashioned chemistry between Shahidi and Melton, though Natasha’s shift from what’s-love-got-to-do-with-it empiricist to swooning schoolgirl is pretty abrupt. A superficial treatment of the parents as tradition-bound impediments dampens the spirit of a story about the hope that love offers in a messed-up world. Opens May 17 at theaters valleywide. (PG-13)—SR

Trial by Fire **
The true story that Trial by Fire is based on, told by David Grann in a 2009 New Yorker article, is fascinating and suspenseful, full of twists that make you reexamine your assumptions. But the movie version—directed by bland social crusader Edward Zwick (The Last Samurai, Blood Diamond) from a screenplay by Geoffrey Fletcher (Precious)—waters it down into a generic, maudlin anti-death-penalty message. Jack O’Connell, in a dopey, unintentionally comical, SNL-level Southern drawl, plays Cameron Todd Willingham, a white-trash Texan accused of setting the 1991 house fire that killed his children. Evidence makes it seem like a clear-cut case of arson for which Willingham is responsible; what makes the New Yorker article so compelling, and what the movie totally fumbles, are the revelations about how that evidence was misinterpreted because of faulty but unquestioned forensic practices. On the plus side: Laura Dern plays an activist trying to clear Willingham’s name, and who goes around telling various men how they screwed up. That’s satisfying, but Zwick, Fletcher and O’Connell all should have been on her route, too. Opens May 17 at Broadway Centre Cinemas and Megaplex Jordan Commons. (R)—Eric D. Snider

Wild Nights with Emily ***
There are two things I know about Emily Dickinson: She was a reclusive spinster, and many of her poems can be sung to the tune of “Yellow Rose of Texas.” The second thing, which is definitely true, is addressed in Madeleine Olnek’s deadpan biopic that tongue-in-cheekily details how the first thing probably isn’t. Turns out Emily (Molly Shannon, played with apt nervous spaciness) had a romantic relationship with her brother’s wife, Susan (Susan Ziegler), while her brother was cheating with Mabel Todd (Amy Seimetz), who would posthumously publish Emily’s work after erasing all of the poet’s references to “Sue.” Olnek wants to set the record straight (as it were) about Emily’s life and personality, but does so in the style of Drunk History: historical facts mixed with comedy. A potential publisher of Emily’s poems (Brett Gelman) is a fatuous, “woke” feminist; Emily and Susan (and the film itself) mock the shallow verses of Helen Hunt Jackson, then called “America’s greatest lady poet,” with modern causticity, albeit expressed in the formal, contraction-less language of the 1880s. It’s altogether more charming and sweet than you might expect an Emily Dickinson biography to be. Opens May 17 at Broadway Centre Cinemas. (NR)—EDS