Utah's Blake Ryan learns from 'The School of Rock'

Local 12-year-old actor/musician on life in a Broadway touring company. The 12-year-old Draper resident returns to Utah this week after nearly a year on the road with the touring company of Andrew Lloyd Webber’s School of Rock: The Musical, as the production makes a stop at the Eccles Theater through June 2. A “swing” cast member in the show about a substitute teacher putting together a rock band of his middle-school students—he understudies several roles, including guitarist Zack, keyboardist Lawrence and band stylist Billy—Ryan is scheduled to be on stage to audiences full of friends and family during this weekend’s performances.

Though the show marks Ryan’s first national tour, he’s hardly a rookie as an entertainer. Trained in piano since the age of 5, and in guitar since he was 8, Blake and his brother Kellen play together in a combo called the BroBand. And he comes from a family of performing artists, with his mother a professional dancer and his father also a musician.

But the idea of doing more than just playing instruments was born, Ryan recalls, when he and his brother watched the 2003 film version of School of Rock starring Jack Black. “It just happened to be on TV and we watched it,” he says. That was like the lightbulb moment for us, because we’d played instruments and stuff, but we’d never sung before. It was scary. Then we saw [the movie], and my first question was, ‘Are they really playing their instruments?’ My mom said, ‘Yeah.’ And that was like, ‘Okay, we’re doing that,’ and the next day was the first day that we ever sang.” 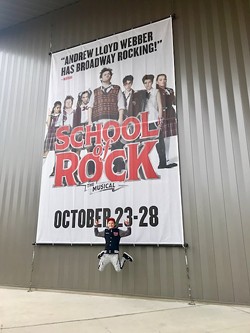 Still, the path towards School of Rock: The Musical was something of a whirlwind. In spring of 2018, Ryan went out for his first theater audition—for a production of Peter Pan—and landed the lead role. Then in April, he and his family decided to send in an audition tape for School of Rock, which first landed him the role of Zack in a regional production in St. George. By July, Ryan had received a call to come out to New York to audition for the touring production.

“I went into the audition, and I played the guitar part, then they asked me to play something on the piano," Ryan says. "And I played ‘Great Balls of Fire.’ They stopped me halfway through, and I was like, ‘Oh no.” They said, ‘You’re a show-off.’ But it was in a good way. So that kind of made me less nervous.

“We went home, and a week later they said, ‘We want you to come on tour with us.’ That was a major shock. We got a contract on a Tuesday, had to sign it by Thursday, flew out on Saturday, and were doing tour rehearsals by Monday.”

It was important to Ryan’s parents, however, to lay a strong foundation for a youngster heading out on tour to be a professional entertainer. “Before we signed the contract,” says Ryan’s mother, Tamara Squires, “we did sit down as a family and say, ‘How does this look, and how does this work, so we stay really solid?’ About every five weeks, either me or Blake’s dad is on tour, and the other one comes home, then once a month we get together as a family in whatever city he’s in.”

The Salt Lake City stop is the second-to-last city for this particular tour, so Ryan is facing the end of this particular experience in just a couple of weeks. But he’s already beyond-his-years philosophical about moving on from School of Rock.

“The thing is, there’s too much tour, and there’s too little,” he says. “I feel like the sweet spot is 10 months, which is what I’m going to end at. You’re with your friends, and you’re just there long enough where you’re like, ‘I’ve heard these songs enough times; I can be okay.’