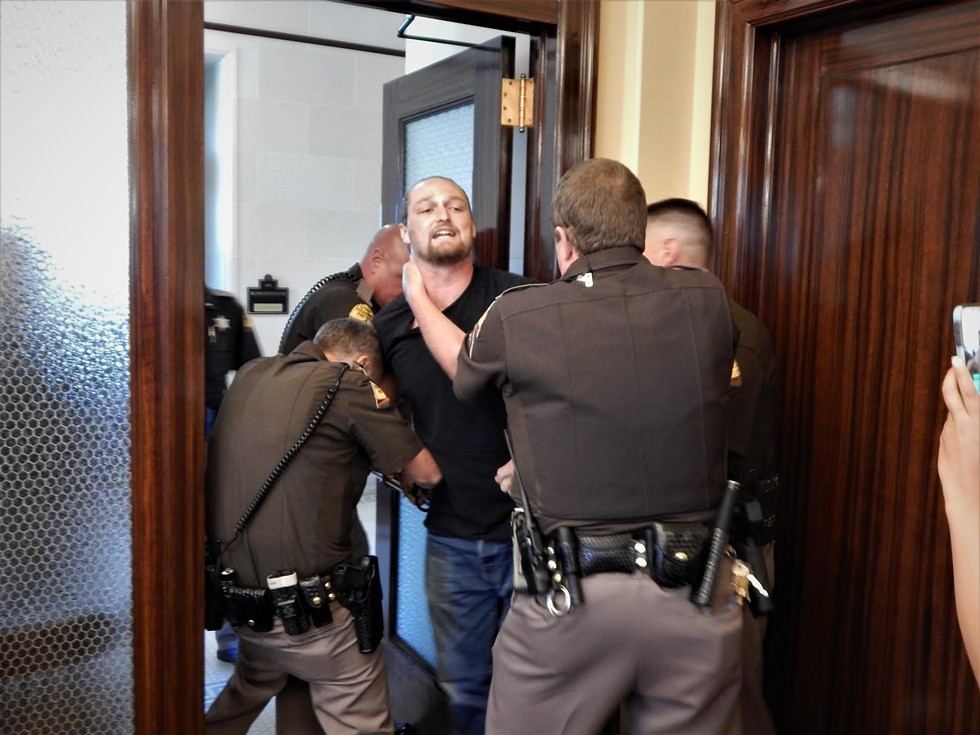 Public outcry against the inland port reached a fever pitch Wednesday as dozens of environmental activists staged a dramatic protest in an attempt to disrupt the latest meeting of the Inland Port Authority Board in the Utah Capitol.


Ethan Petersen, a member of the group Civil Riot, handcuffed himself to the front door of the packed committee room and refused to budge as other activists chanted “Abort the Port!” Petersen was carried away by half a dozen Utah Highway Patrol troopers and booked on charges of disrupting a legislative meeting and interfering with an arresting officer.


Related Attack of the 20,000-Acre Inland Port!: A cautionary tale on how a similar project wreaked havoc on a small Illinois town.

Attack of the 20,000-Acre Inland Port!
A cautionary tale on how a similar project wreaked havoc on a small Illinois town.
But that was before developers left it strewn with broken promises—low-wage jobs, crumbling infrastructure, insane traffic and, in a first for a largely rural community, air pollution.
By Emma Penrod
Cover Story


Three other activists were also held at the Capitol and then released after being cited on charges of disrupting government business, UHP Sgt. Nick Street said.


Activists shut down the board’s previous meeting in April, and everyone seemed prepared for a showdown on Wednesday. Civil Riot, a Salt Lake city-based civil resistance collective, issued a press release on Tuesday promising to “swarm” the gathering. UHP troopers were posted inside and outside the committee room, and legal observers from the ACLU of Utah—identifiable by their bright blue vests—also attended.


Some of the more confrontational activists showed up carrying banners and wearing white surgical masks with black “Xs” drawn on them.


The ruckus broke out moments after the session began when a protester interrupted the proceedings by getting up and reading a statement out loud. Others stood up from their chairs and began moving toward the front of the room. The board immediately announced a recess as troopers escorted activists out of the room.


“We’re not going anywhere, OK?! May as well let her speak!” Petersen yelled. “This meeting’s done!”


After protesters were ejected, some came back inside and again started chanting. Lawmen kicked them out once more, along with a group of demonstrators who were sitting quietly holding a banner.


When the dust had settled, the board continued its meeting, maintaining a businesslike tone as activists sang and chanted in the hallways. The Salt Lake Tribune reported that it passed an $8-million budget for the next fiscal year and hired Jack Hedge, director of cargo and industrial real estate for the Port of Los Angeles, as its new executive director.


"We are grateful for members of the public who attended and provided comment in a lawful and respectful manner and for those that continue to engage and participate in the public process and public outreach forums,” board chairman Derek Miller said in a statement following the meeting, the Deseret News reported.


Several other citizens offered comments—the majority against the port but a couple in support.


“I’d like to thank you enduring for what you endure every single meeting as you deliberate the advancement of this good economic idea,” Jeff Hartley, a Utah oil and gas lobbyist, said. “A lot of us are confident that the state will make sure the inland port is done the right way.”


The board was established by the Legislature to oversee creation of an inland port, a commercial hub planned in the city’s Northwest Quadrant. The project is still in its early stages, but it’s drawn public outcry—including a lawsuit filed by Mayor Jackie Biskupski—because of fears that it will degrade the environment and hammer the already-underserved westside with pollution and traffic congestion.

"[Protesters are] willing to put their bodies on the line to prevent this from happening, which is a pretty big step to take,” —Deeda Seed tweet this


“Direct actions have happened throughout Utah for a long time. I think it’s just now happening with the inland port because there’s so much lack of transparency and so much frustration within the communities that will be affected,” Mann says, arguing that the board needs “to adopt a more conscientious stance in how they’re moving forward in their decision-making process.”


One of the speakers echoed this frustration after the protests quieted down, saying she felt like she was like “talking to a wall.”


“Many of you don’t even give us eye contact,” she told the board. “And then when there is a legitimate question with a “yes-no” answer, we’re told this is entirely public comment and you refuse to interact with us at all.”


Deeda Seed, a former city councilwoman and campaigner with the Stop the Polluting Port Coalition, attended the meeting but didn’t participate in the protest; her group has taken a more education- and advocacy-oriented approach, though she said she respects Civil Riot’s right to exercise extreme measures.


“They’re willing to put their bodies on the line to prevent this from happening, which is a pretty big step to take,” Seed said. “They’re doing their thing and we’re doing our thing, but we’re all pointing in the same direction—which is stop the polluting port. That’s our goal. And that should be everyone in Salt Lake City’s goal.”