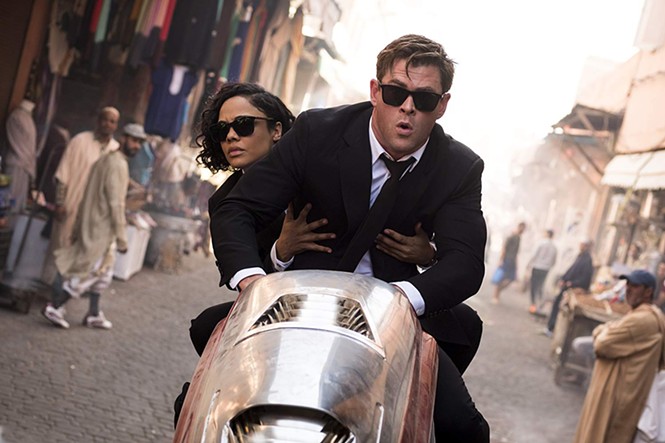 It's franchise revival time at the multiplexes, plus a Sundance crowd-pleaser and the latest from an indie-film icon.

American Woman ***
If you can get through the first 30 minutes, you’ll find the last 80 rewarding. At the outset, Deb (Sienna Miller) is such an asshole—fighting loudly with her sister (Christina Hendricks), mother (Amy Madigan) and brother-in-law (Will Sasso)—that you hope the movie will end when she gets into a horrific-seeming car crash (she walks away from it). Deb has reasons to be terrible; she picks bad relationship after bad relationship, has a 17-year-old daughter with a 1-year-old son living in her home, and a series of dead-end jobs. It’s only when her daughter goes missing, ironically, that Deb begins getting her life together. As American Woman progresses, Deb raises her grandson, gets a degree and becomes a leader at a good company. But there’s a melancholic undercurrent running through it—this story hinges on a disappeared child, after all—that roots it in something larger than a jerk-gets-her-life-together story. Jake Scott’s direction is steady, which helps when the screenplay veers into melodrama, and the score is appropriately elegiac. At the center, Miller holds the sloppier moments together in a way that makes it better than it should be. Opens June 14 at Megaplex Jordan Commons. (R)—David Riedel

Late Night **1/2
It’s a bit on-the-nose for a white dude writer to suggest that Mindy Kaling’s crowd-pleaser of a script goes too easy on the stacked deck favoring white dude writers, but, well … yeah. She plays Molly Patel, a would-be comedy writer who lands her first gig as an openly-stated “diversity hire” for a long-lived late-night talk show hosted by Katherine Newbury (Emma Thompson). But she arrives in that previously all-white-dude writer’s room as the network considers replacing Katherine because her show has grown stale and predictable. The story rides or dies on the Devil Wears Prada-esque relationship between Molly and Katherine, more specifically on Thompson's delightful, all-in performance as a taskmaster boss watching herself become irrelevant. Kaling lands a few body blows when taking on racism, sexism and ageism in the entertainment industry, and doesn’t let Katherine off the hook in her disdain for what a 21st-century audience demands. It also feels like she’s playing it safe to make sure it remains comfortable for a mainstream audience ready to whoop in agreement in all the right places, provided they’re not asked to think too hard about privilege. Opens June 14 at theaters valleywide. (R)—Scott Renshaw

Men In Black: International **1/2
A Will Smith-and-Tommy-Lee-Jones-free reboot of Men In Black has the opportunity to re-explore the idea of a civilian discovering the reality of aliens among us, but despite feinting at that idea, this seems much more interested in chases and guns. Tessa Thompson plays Molly, whose childhood close encounter has made her obsessed with finding and joining the secretive organization, where she becomes a probationary agent with partner Agent H (Chris Hemsworth). Thompson’s goofy enthusiasm works through some of the early scenes—including a delightful indoctrination by Emma Thompson—as she gets her feet wet, but somehow that character vanishes as the focus shifts to Hemsworth’s cocky beefcake hero. The real star is a tiny alien voiced by Kumail Nanjiani, who provides nearly all of the legit laughs with his deadpan observations as the search for a potential mole within MIB drags a lot of the plot into “who cares” territory. Despite some silly fun, it starts to feel much longer than it is when the stuff that’s distinctive about this world gives way to generic blockbuster-ness. (PG-13)—SR

The Outsider
[not screened for press]
A Chinese railroad worker finds himself on the wrong side of corrupt Old West lawmen. Opens June 14 at Megaplex Gateway.

Shaft *1/2
The new Shaft—starring Jessie T. Usher as anxious FBI data analyst John Shaft—is a direct sequel to the 2000 Shaft, which starred Samuel L. Jackson as badass police detective John Shaft, who was the nephew of Richard Roundtree’s original John Shaft from 1971 (the one that was a sex machine to all the chicks). All three John Shafts appear—Jackson retconned to be Roundtree’s son—in this exceptionally mediocre sequel, which for some reason is a broad, unfunny generation-gap comedy focused on Shafts III and II working together to solve Junior’s friend’s murder and bring down drug lords. Shaft II is an irascible, un-P.C. Archie Bunker type who complains about Millennials and keeps wanting III to assure him that he is isn’t gay (more specifically, that he “likes p——y”); III hates guns but ultimately has to use them (and is great at it). Meanwhile, original Shaft’s only function is to show up at the end so we can see all three together, and hopefully not notice that Roundtree is only six years older than Jackson. Altogether a tedious and embarrassing spectacle, bearing no resemblance to the blaxploitation classic. Opens June 14 at theaters valleywide. (R)—Eric D. Snider