Looking for a healthy dose of 'Merica? Set your GPS to State St.

You’ll want to crank up Orrin Hatch’s seminal “America Rocks!” for this one. It turns out Utah is the fourth most patriotic state in America.


This is according to a recent report by personal finance website WalletHub, which weighed the 50 states based on “key indicators of patriotism”—including the percentage of state residents who voted in the 2016 presidential election; the number of residents enlisted in the military; and the number of AmeriCorps volunteers per capita.


The Beehive State knocked it out of the park in three subcategories, getting first out of all 50 states for what the study describes as the “Volunteer Rate,” the “Civics Education Requirement,” and the number of volunteer hours Utahns contribute to worthy causes.


We could have ranked higher, but only 23% of adults here turned out to vote in the presidential election. That’s OK. On overall scores, Utah sits pretty between Idaho (5th place) and Vermont (3rd place). New Hampshire got named the No. 1 most patriotic state.


As you grill hot dogs and guzzle beer in celebration of this year’s Fourth of July, let us here at City Weekly present you with another question⁠—if Utah’s civic pride is unquestionable, then what’s the most hella patriotic part of Utah?


We did some calculations and found out.


An easy guess would be the State Capitol. This is where all the important state business gets done, of course. The building is also a spitting image of the U.S. Capitol Building in Washington D.C. Unfortunately, according to our expert opinion, it’s that copy-cat job⁠ of a building that makes the Utah Capitol miss the mark—it’s beautiful for sure, but also flouts all the rules against plagiarism we learned in public school⁠. Better luck next time, lawmakers.


It’s also possible to name Bears Ears National Monument as the most patriotic stretch of land in all of Utah. The monument’s raw beauty certainly speaks to the enduring power of American landscape, while efforts to preserve such a place reflect the generosity of American spirit. Yet the chance of it being the most patriotic (as opposed to standard levels of patriotic) went out the window when Donald Trump drastically reduced the monument’s size to make way for fossil fuel and uranium mining. That’s not cool (and it’s also not patriotic).


What could it be, then? What’s the most patriotic place in Utah? We’ll tell you.


Yep, that’s right. The 17.3-mile-long road that stretches from the steps of the Utah Capitol all the way down to a cluster of fast-food restaurants in northwest Draper.


As Utah’s original interstate highway, State Street long served as a crucial corridor, offering a straight shot south to the Point of the Mountain pass for many generations of horse-drawn carriages, automobiles and most recently e-bikes and motorized scooters. 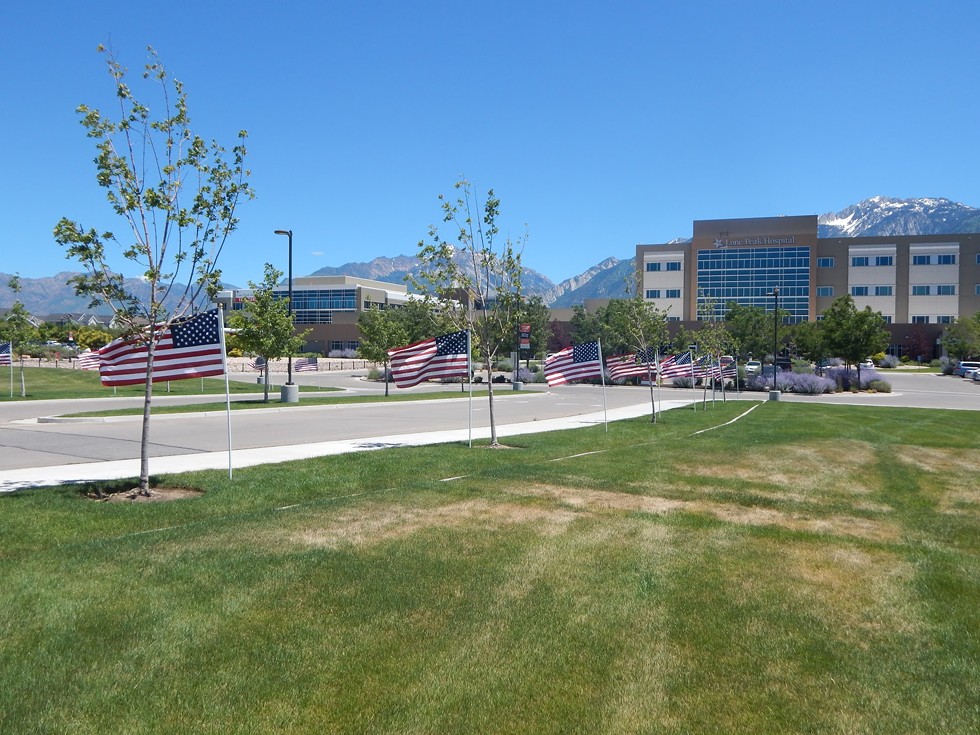 "[W]e mow our lawns and plant flowers and pull weeds. Why not express our patriotism?” —New Millennium Group's Derek Overstreet tweet this

State Street represents a microcosm of Utah life. It runs through the most vibrant areas, and it also has its rough-and-tumble side, underscoring how the state thrives and also what’s in need of improvement. Indeed, it’s this “great street” that city planners in Salt Lake City and South Salt Lake have focused on as part of an effort to promote public safety, affordable housing, cultural connectivity, urban redevelopment and environmentally friendly modes of transportation for the growing metropolitan area.


There’s another reason why we felt State Street was the most patriotic place.

It’s because of the flags.


Take a trip all the way to the end of it, where a busy In-N-Out Burger brushes shoulders with the blaring traffic of Interstate 15. Hop in a car, activate a Lime scooter or simply power up your Chevrolegs, and a day’s travels up State Street will offer many sightings of Old Glory.


There are big flags and little flags. Some flags are hiding behind trees near the TRAX line, and others are waving proudly in front of government buildings and businesses. At one point, I saw a Jeep speeding down the road with a banner-sized flag attached on the back, rippling in the wind. Later, I wandered into an office park parking lot where a whole line of cars all proudly bore Utah’s red, white and blue “In God We Trust” license plates.

The most impressive display, by far, was at National Auto Plaza in Sandy. You can spot the used car dealership’s huge flag waving in the sky a mile away. In the blazing, 96-degree heat of the afternoon, seeing our nation’s colors standing so proudly off in the distance was something to behold—something akin to the amazement camel caravan riders must have felt 1,000 years ago after first seeing the Great Pyramid of Giza rising up from the stretches of the Sahara.


Up close, National Auto Plaza at 10790 State Street had flags flying all over the place. They were running along the sidewalk. In the parking lot, they were positioned in the grass, alongside lifted Ford trucks and other used automobiles. The giant flag in the center of the dealership was even more impressive up close than from far away.


“I love saying, ‘We’re National Auto Plaza—the one with the giant American flag in our parking lot,” one salesman told City Weekly.


Nearby, New Millennium Group, a firm that specializes in financial advising and retirement planning, also had a behemoth flag flying in front of their building. Reached on the phone, NMG investment advisor Derek Overstreet said he had the flag installed to show his support for his country. He avoids flying the flag at half-staff except for in the most major national emergencies.


“I hate how people make any excuse to be half-mast,” he said. “I just think we use that way too much.”


Overstreet ordered the flag from Colonial Flag, a Sandy-based company that designs and sells flags of all kinds for clients across the nation and overseas. Every three to six months, Overstreet will take his flag down and inspect it for wear and tear. When it’s time for the flag to retire, Colonial Flag will take it and run up a crisp one.


“It’s not without maintenance,” Overstreet said. “But we mow our lawns and plant flowers and pull weeds. Why not express our patriotism?”