by Scott Renshaw and Hight, Erik

TUESDAY 7/23
Still Woozy
Still in his grassroots stage, Sven Gamsky (better known as Still Woozy) is a self-recorded project based out of his home studio setup in Oakland, Calif. Gamsky started sharing his music on Spotify with the 2017 release of his first single, “Vacation,” before gaining traction with the release of his second single “Cooks,” which was featured on Spotify’s hand-picked popular playlists. Still Woozy became well-known after releasing his third viral hit “Goodie Bag” in the same year, launching him into the internet music scene.  Still Woozy combines a playful conversational style of singing with his own acoustic and electronic backtracks. His stage presence is known to reflect the same abstract style of music and visuals seen in his music videos, which are self-recorded on the streets of Oakland with the help of his friends. The current tour finds him promoting songs from his first EP, Lately, with catchy tracks like “Habit” and “Ipanema” feat. Omar Apollo and Elujay. (Erik Hight) The Complex, 536 W. 100 South, 7 p.m., thecomplexslc.com 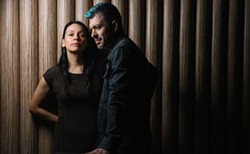 SATURDAY 7/27
Rodrigo y Gabriela
Local fans have waited five years to see the return of Rodrigo y Gabriela, the flamenco guitar duo from Mexico. Their last album, 2014's 9 Dead Alive, was incredibly well-received, and reached 22 on Billboard’s Top 200 Albums. This time, Rodrigo Sanchez and Gabriela Quintero are back with their new album Mettavolution, keeping their tradition of covering popular classics, this time including the epic 23 minute song “Echoes” by Pink Floyd, as well as a few originals. The two have gained popularity largely because of their incredible talent as guitarists, harmonizing and creating dense soundscapes utilizing only their classical guitars; Quintero even plays percussion on her guitar in many of their original tracks. The two musicians brought their talents together in Mexico over two decades ago, as they were both trying to break into the Mexican heavy metal scene. It wasn't until they combined their efforts and moved to the streets of Dublin that they began to find success with their nylon string guitars. Busking in the streets and playing in pubs, Quintero and Sanchez caught the eyes and ears of the music scene across Europe, no doubt due to their visually appealing combination of technique and improv. Now on their sixth studio album, Rodrigo y Gabriela have stuck to their roots, with six new tracks, a few which have introduced the synthesizer, adding to the depth of the album which captures the idea of evolving through “Metta,”  the Sanskrit word for "compassion." When speaking with Rock Cellar Magazine about including their cover of medley “Echoes,” Sanchez said, “The lyrics are pretty much in context with the whole album, so why not?” (Erik Hight)
Snow Park Outdoor Amphitheater, 2250 Deer Valley Drive, 7:30 p.m., all ages, deervalleymusicfestival.org