Out of Liberty, Linda Ronstadt: The Sound of My Voice

Adam **1/2
Gender farce boasts a rich comedic legacy running from Shakespeare to Some Like It Hot to Tootsie; it’s hard to know what to do with a take on that genre that isn’t particularly interested in the comedy. Director Rhys Ernst and screenwriter Ariel Schrag adapt Schrag's novel set in pre-marriage-equality 2006, when baby-faced, sexually-frustrated high-schooler Adam (Nicholas Alexander) heads to New York to spend the summer with his gay older sister, Casey (Margaret Qualley), among her LGBTQ cohorts. There he falls for Gillian (Bobbi Salvör Menuez), and tells a little white lie: that he’s a transgender man. Complications ensue, and Alexander makes for a likable, young-Michael-Cera-esque protagonist as he grows up in his understanding. This story is deeply committed to exploring the fluidity of sexuality and gender identity, and does so with compassion and a deft touch. But Ernst seems unsure what to do with set-ups that should burst with comedic possibilities, like how a straight cisgender guy handles buckling himself into a strap-on. The pace and timing are that of a drama, but it should be possible to laugh at an idea while still taking it seriously. Opens Sept. 13 at Tower Theatre. (NR)—Scott Renshaw

Brittany Runs a Marathon ***
Body image collides with self-worth in a way that’s both funny and surprisingly emotional thanks to the script by Paul Downs Colaizzo and a terrific central performance by Jillian Bell. She plays Brittany Forgler, an under-employed, hard-partying New Yorker who gets a warning from her doctor to address her weight and overall health. So Brittany decides to start running—one reluctant block at first, then gradually becoming determined to run in the New York Marathon. Colaizzo assembles a winning cast of supporting charters—Michaela Watkins as Brittany’s running buddy; Utkarsh Ambudkar as an unmotivated pet-sitter—but most of what works here revolves around Bell’s work as a woman convinced she needs to be the “funny fat girl” to put others at ease, and look a different way in order to deserve love. The thesis-point speeches are kept to a minimum, allowing the focus to remain on how self-loathing thwarts Brittany’s chances at happiness. Attempts to weave family history into Brittany’s psychology fall short, and the climactic run drags a bit. It’s all worth it, though, for a payoff that emphasizes Brittany’s triumph as coming to believe she’s worth cheering for. Opens Sept. 13 at theaters valleywide. (R)—SR

Freaks
[not reviewed]
A young girl attempts to discover what's outside the house where she's kept protected by her paranoid father. Opens Sept. 13 at Megaplex The District. (R)

The Goldfinch **
There are several things wrong with John Crowley’s adaptation of Donna Tartt’s Pulitzer Prize-winning novel, but it should not be ignored that it’s one of the most consistently miscast movies in recent memory. The narrative shifts between time periods, as young Theo Decker (Oakes Fegley) deals with the death of his mother in a bombing at an art museum, and the adult Theo (Ansel Elgort) still wrestles with the fallout from that tragic day. Crowly mounts the production with care, employing Roger Deakins’ cinematography for rich images and a production design built around rooms full of art and beauty. But the earnest seriousness of this story based around childhood trauma collides with weird plot dynamics, including violent encounters with Russian gangsters and underdeveloped romantic entanglements. Then there are the truly baffling casting decisions: Elgort, flailing at trying to convey torment; Finn Wolfhard doing a Ukrainian accent; Sarah Paulson implausibly trying to play working-class; Luke Wilson even more implausibly trying to be menacing. Too many theoretically emotional moments are built around actors simply not built for the tricky work this script asks them to pull off. Opens Sept. 13 at theaters valleywide. (R)—SR 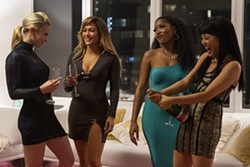 It’s Goodfellas, except they’re gals; it’s The Big Short, except the Wall Street assholes who crashed the global economy in 2008 finally get their comeuppance. This based-on-fact drama—about New York City strippers who conned their clients out of lots of dough—is full of the seductiveness of easy money and the giddiness of getting away with a perfect crime. Screenwriter/director Lorene Scafaria effortlessly wraps us up in charmed complicity with the felonious wrongdoing of veteran stripper Ramona (Jennifer Lopez, in the performance of her career) and her protégé, Destiny (Constance Wu, absolutely riveting)—until we are chastened, as arrogance, rashness and greed eventually lead to the inevitable downfall. Scafaria weaves sympathy, sensitivity and big-hearted humor into a story that, in the hands of a male filmmaker could have quickly, and probably intentionally, descended into crass exploitation. But Hustlers is never salacious, never sensational. It never reduces these women to nothing more than their bodies, and it knows that what they do is work. It’s the best-ever corrective to the embarrassing cliché about sex workers with hearts of gold. Opens Sept. 13 at theaters valleywide. (R)—MaryAnn Johanson

Linda Ronstadt: The Sound of My Voice **1/2
I’d love to go behind the scenes to understand how Jeffrey Friedman and Rob Epstein managed to get access to present-day interviews for a documentary about Linda Ronstadt, yet end up learning almost nothing about who she is as a person. The veteran filmmakers cover the breadth of the singer’s life, from her arrival in California as a teenager, her early success in the burgeoning 1960s folk scene, and the ensuing career that saw her finding success in pop, rock, Great American Songbook standards and even mariachi. To Friedman and Epstein’s credit, they devote a lot of time to full song performances, allowing for a real appreciation of Ronstadt’s powerful voice and her gifts as a song stylist. Yet she remains frustratingly enigmatic as a person; even when the now-72-year-old Ronstadt speaks in voice-over—and it’s pretty much only in voice-over, her present-day life, retired from performing, left basically unexplored—it’s generally for historical rather than psychological purposes. What made for a personality willing to venture from areas where she had become a star into such varied genres? Your guess is as good as mine. Opens Sept. 13 at Broadway Centre Cinemas and Megaplex Jordan Commons. (PG-13)—SR

Official Secrets ***1/2
In 2003, British translator Katharine Gun (Keira Knightley) received an email request from her bosses: She and others working at British intelligence organization GCHQ were to help gin up evidence to support the planned Western-coalition invasion of Iraq. She leaked the email to the press, and journalist Martin Bright (Matt Smith) at London’s The Observer made it public. This is not a spy thriller; it’s a story of emotional and intellectual suspense as Knightley’s Gun wrangles with her patriotism and her conscience while making the decision to leak, with a side dish of similar debates on the journalistic side. Smith as Bright is joined by Matthew Goode and Rhys Ifans as fellow journos working on the story, wondering just how far their watchdog role can take them. Director Gavin Hood follows up his previous film, 2015’s Eye in the Sky—another look at the ethics of modern warfare—with a sharp, smart tale of moral dilemmas, the limits of governmental secrecy and, ultimately, the vital necessity that decency and principle are worth standing up for. Basically: Blow all the whistles as needed. Opens Sept. 13 at theaters valleywide. (R) —MAJ

Out of Liberty **
The desire to promote the faith clashes with basic narrative common sense in this historical drama from director Garrett Batty (Freetown). It deals with events in Liberty, Missouri circa 1838-1839, as Latter-day Saint church leaders—including Joseph Smith (Brandon Roy Olive)—sit in prison awaiting trial on trumped-up charges of treason. Batty and his screenwriting team spend a lot of time in that below-ground cell, alternating between stilted arguments over their course of action and several attempts at escape, and nearly as much time on the various lynch mobs hoping to serve up some frontier justice. The frustrating thing is that the real character arc here belongs to jailer Samuel Tillery (Jasen Wade), a non-Mormon veteran of the War of 1812 with some demons to exorcise. His matter-of-fact determination to protect his charges, and his growing realization that they may be guilty only of being hated, makes for the most compelling material here, but Tillery disappears for huge stretches at a time. All the earnest prayers and speeches about being the subject of intolerance are far less interesting than one man trying to do what he thinks is right. Opens Sept. 13 at Megaplex Theatres. (PG)—SR