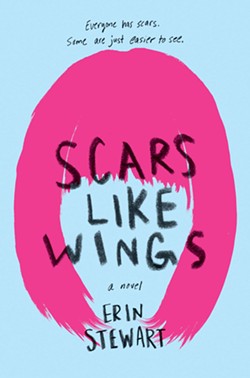 Contemporary young-adult fiction often finds protagonists dealing with a broad range of real-world challenges—family strife, substance abuse, discrimination, questions of identity. Utah author Erin Stewart brings a unique kind of trauma to her debut novel Scars Like Wings (release date Oct. 1), but grounds it in such poignant emotional truth that this love letter to a very specific type of survivor speaks to a host of wider issues about grief, isolation and the need to reach out for connection.

The narrative begins one year after 16-year-old Ava Lee has survived a house fire that took the lives of her parents and her beloved cousin, and which left her severely burned over 60 percent of her body. Now living with her aunt and uncle, who are still coping with their own grief, Ava reluctantly agrees to return to high school, certain that the experiment will be short-lived after she deals with the disgust or pity of her peers at her forever-changed appearance. But she unexpectedly finds friends in Piper, who has also been impacted by an accident that changed her life, and Asad, who pulls her back into the theater which had been her love before the accident.

The depth of Stewart’s research permeates the novel—details about painful reconstructive surgeries and the care required in their aftermath—yet Scars Like Wings never once feels like a textbook or a “burn survivors are people too” public-service message. She also weaves The Wizard of Oz into the story, both as the musical performed by Ava’s high-school drama club, and in a later excursion to see the musical Wicked, as a clever recognition that fictional narratives often provide allegorical insight into feelings of alienation and loss.

Mostly, she digs through to the heart of Ava, allowing her to emerge in all of her angry, bitter, hopeful, needy and loving complexity. It can be a challenge for authors to convey the ricochet of teenage emotions even when they’re not facing crisis points, in a way that feels authentic and deeply affectionate towards the characters. Stewart brings heartbreaking honesty to the ups and downs Ava faces on her journey of physical and emotional recovery, with lovely moments of insight that might bring a tear to the eye. These characters might bristle at people earnestly talking about them as "inspirational," but that doesn't mean the story Stewart tells about them can't be.

It’s also fascinating to note that while Stewart doesn’t shy away from vivid description of the nature of Ava’s injuries—a toe grafted to where she lost a thumb, patchwork skin grafts on her face—the novel does something that a filmed version of a similar story really couldn’t do. As clear as it is that the people around Ava can’t help but notice her physical appearance, Scars Like Wings allows for a focus on her soul. Stewart employs elements that might be familiar from other young-adult stories, while giving them a ringing clarity of purpose. For Ava, finding the old self behind her new face is about not just how she needs others to treat her, but how she realizes she needs to treat others.