The flop-sweat of trying to make a super-villain origin story into serious drama. 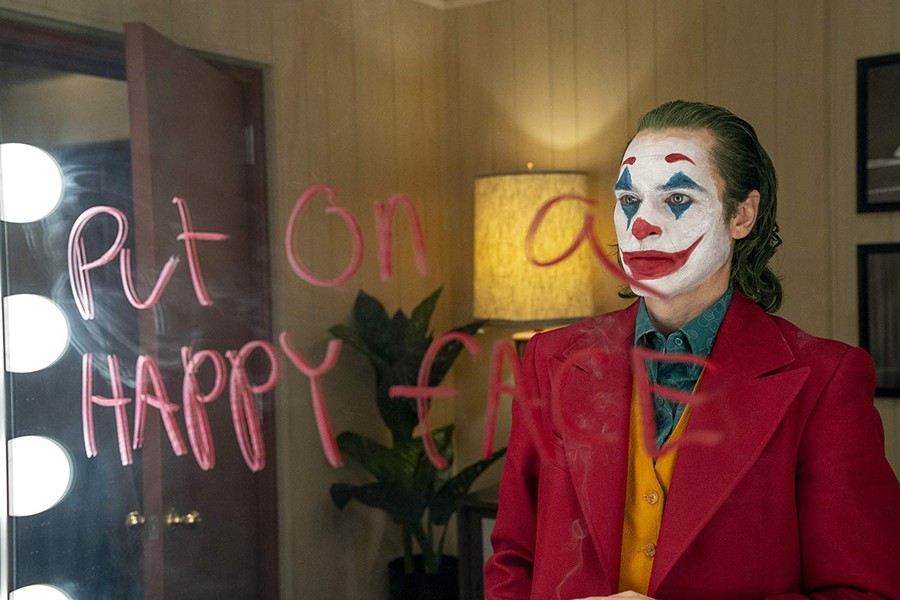 Arthur Fleck (Joaquin Phoenix) finds the pancake clown makeup he applies to his face frequently smudged by tears, blood or other liquids, but it’s nothing compared to the flop sweat that comes off of co-writer/director Todd Phillips’ movie as he strains to make Joker seem Thoughtful and Insightful. A determinedly grim portrait of burgeoning psychosis, it’s neither as lunkheadedly reactionary as early reports seemed to suggest, nor as richly layered as the image it’s trying to project. As Phoenix sits at the center of it all, acting his ass off, it quickly becomes clear that there’s a whole lot of nothing caught up in his gravity.

Set in a vague, perpetually-flickering-fluorescent-lights approximation of 1981 New York—although this is, of course, Gotham, there’s a notable garbage strike, and theater marquees show Blow Out and Zorro, The Gay Blade—it presents Phoenix’s Arthur as a professional party clown who’s already clearly troubled when we first meet him. Heavily medicated after spending time in a mental hospital, he lives with his mother (Frances Conroy) and imagines himself building a standup comedy career to be on the late-night show of his idol, Murray Franklin (Robert DeNiro). And as close to the edge as Arthur is already standing, it doesn’t take much to tip him over, whether it’s an assault by a bunch of kids, his mother’s obsession with her former employer Thomas Wayne, or a subway confrontation with three drunken Wall Street bros—one that inadvertently turns his clown-faced alter-ego into a mysterious folk hero.

It’s deeply awkward whenever Joker waves its hand to remind you that it’s part of the DC Comics universe, whether via the inclusion of the Wayne family or a visit to a mental facility called Arkham. As heavily as Phillips leans into his Scorsese-influenced universe, making Arthur an amalgam of Travis Bickle and Rupert Pupkin, it feels like a weird sop to those who might see the movie just because the character comes from comics. Everyone involved wants you to understand this is serious R-rated psychological thriller, not just some summer action movie, but also hey look, it’s young Batman-to-be!

"It’s neither as lunkheadedly reactionary as early reports seemed to suggest, nor as richly layered as the image it’s trying to project." click to tweet
Then, when Joker does try to serve up some subtext, it bounces all over the place in search of a real idea. When Arthur’s subway crime makes the clown seem like a symbol of taking down the 1-percenters, bands of angry followers put on clown masks in his honor, oblivious to the fact that there’s no political statement behind his actions—which might have been an interesting observation about simple-minded followers attaching themselves to a leader who doesn’t actually give a shit about them. But Phillips proves more interested in trying to turn Arthur into a cautionary tale about troubled people abandoned by the system—a thesis statement that Arthur helpfully says out loud, in so many words. It’s hard to navigate the choppy waters of Arthur’s psyche, and to what extent we’re supposed to be sympathetic towards him, even as we see how many times people literally or metaphorically kick him when he’s down.

At least there’s Phoenix’s performance, which is never anything but magnetic to watch. The best moments find him doing what amounts to homework in how to approximate normal human behavior: looking around at a comedy show to know when he’s supposed to laugh; forced to take notes about making eye contact; watching video of a talk-show guest to understand how to seem at ease. It’s compelling watching him wrestle with a Tourette-like neurological condition that has him cackling uncontrollably at inappropriate times, and slithering his skeletal frame through Arthur’s notion of a dance of joy. You don’t have to work hard as a viewer to accept that you’re watching a kind of madness in Joker. The question is, what kind of madness. If this is supposed to be more than a comic-book movie—indeed, a serious movie about serious issues—it would have been nice to see the filmmakers take the job of exploring their character’s place in the world more seriously.