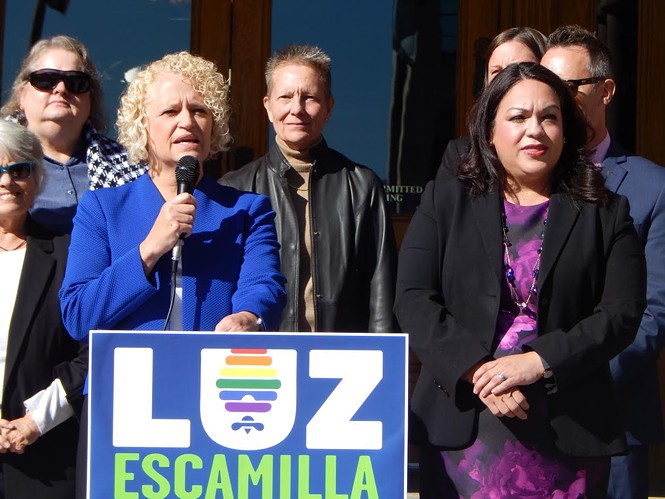 
Biskupski announced her official endorsement of Escamilla in a Monday morning news conference on the steps of the City and County Building. Backed by a host of local LGBTQ leaders, Biskupski—the first openly gay mayor voted into office in the city’s history—praised Escamilla’s experience as a Latina lawmaker and executive, saying she would bring a “fresh and different perspective” to the city if elected.


“I know there will be change. There has to be change. There is work to be done in this city,” Biskupski said. “I believe the change she will bring will improve the lives of everyone in Salt Lake City.”


Biskupski, who isn’t seeking reelection, lent her backing to Escamilla during the final stretch of the race between her and City Councilwoman Erin Mendenhall. The two made it to the top of the race in the August primary and are now busy dropping policy proposals and racking up notable endorsements as the clock winds down to election day on Tuesday, Nov. 5.


Last month, Escamilla appeared side by side with environmental lawyer David Garbett, one of her former challengers in the primary, when she released her policy goals for the environment. Meanwhile, Mendenhall recently got the thumbs up from businessman David Ibarra, another former mayoral hopeful. City Councilman James Rogers, who represents District 1 on the westside—where Escamilla has her strongest support base—also issued an endorsement in support of Mendenhall. In a statement posted on Mendenhall’s campaign Facebook page, Rogers praised her for negotiating with the state over the inland port while issuing a dig against Biskupski for walking away from the talks last year.


“Erin is a true friend to Salt Lake City’s westside," Rogers declared. "She has been a partner and ally to me on the Council, expanding access to opportunities for westside residents and building a better deal for neighborhoods whose residents have too often been an afterthought in the city’s political calculus. Erin not only sees the potential of the westside as a part of this city, but has long felt the responsibility to fight for it.”


Biskupski, who has filed a lawsuit over the inland port, has been openly supportive of Escamilla for months now, but today’s endorsement makes it official. In the news conference, Biskupski said that Escamilla has followed in the footsteps of Deedee Corradini—the first woman elected to the mayor’s office in Salt Lake City in 1991—by advocating for LGBTQ and social justice issues during her time in the state Senate, including backing the proposed conversion therapy ban. She also credited Escamilla for voting against the bill forming the Utah Inland Port Authority.


Speaking with reporters after the news conference, Escamilla said she didn’t have immediate plans to announce any specific policy changes related to LGBTQ issues in the city. But she reiterated her interest in making sure underrepresented communities are included in city business.


“I want our city to reflect the diversity of the city—everything from our workforce to the way we do our programs and services,” she said.