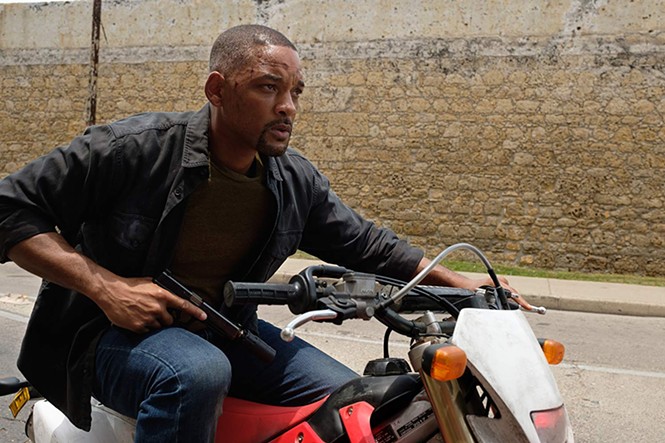 The Addams Family **1/2
This animated reboot, set in the present day, has everyone's favorite spooky Goth family (or second-favorite, if you were more of a Munsters person) in conflict with a new neighborhood that has popped up nearby called Assimilation, in which sameness is celebrated over individuality. The subdivision is owned (?) by one Margaux Needler (Allison Janney), perky host of a popular TV home-makeover show called Design Intervention (which is a pretty great title), and she’s worried the ghastly Addams mansion that overlooks it will make it hard to sell the houses—which are already occupied. (Maybe it will make more sense to you than it did to me.) The gang's all here—Oscar Isaac as Gomez, Charlize Theron as Morticia, Chloe Grace Moretz as Wednesday, Finn Wolfhard as Pugsley, Nick Kroll as Uncle Fester—and there are a few chuckles along the way. As usual, Wednesday is the funniest character, going to public school for the first time and experimenting with normal tween girl behavior, much to Morticia’s chagrin. But the main story, while harmless enough, is bland, warmed-over “be yourself” pabulum you’ve seen a thousand times. Opens Oct. 11 at theaters valleywide. (PG)—Eric D. Snider

El Camino: A Breaking Bad Movie ***1/2
The essence of Breaking Bad was a tale of hubris, in its chronicle of mild-mannered chemistry teacher Walter White’s transformation into a menacing drug lord. For this spinoff movie, focusing on White’s partner-in-crime Jesse Pinkman (Aaron Paul), series creator Vince Gilligan takes on a considerably more melancholy air, though not without some of the show’s trademark gut-knotting tension. Interspersed with flashbacks featuring several series regulars, we pick up right where the series ends, with Jesse freed from captivity and trying to find a way to continue his life while he’s sought by police in connection with White’s crimes. Gilligan opts not to play this narrative at full throttle, allowing for plenty of terrific character moments, particularly for Jesse Plemons’ creepily placid Todd and Robert Forster as a vacuum repairman with some other important skills. The centerpiece, however, is Jesse, and Paul gets to play a wide range of notes between the cocky “bitch”-talking teen he once was and the haunted soul events have turned him into. It’s oversimplifying things to call it a redemption narrative; it’s more a fascinating way to look at this brutal world from a slightly different point of view. Opens Oct. 11 at Tower Theatre. (NR)—Scott Renshaw

Gemini Man [zero stars]
It’s 50something badass military sniper Will Smith versus cloned younger Will Smith! That is the high concept Gemini Man has been selling in every trailer and advertisement. And yet director Ang Lee treads water with tedious, tension-free spy action for more than half of his runtime before he even “reveals” what we knew going in. We never learn why young Will Smith has been sicced on older Will Smith by black-ops honcho Clive Owen. We never get any clone-related sci-fi speculation, with a nature/nurture dichotomy that remains an unfired gun on the mantlepiece: Older Will Smith has a fear of drowing, acquired through childhood experience, that his young clone cannot have, which seems ripe for exploiting in a big action sequence, but never happens. The supporting cast (including the excellent Mary Elizabeth Winstead) is wasted, with nary a single plausible human relationship developed. All that’s left is Lee’s goofing around with a super-high-def format that delivers (in some cinematic presentations) an empty story in a visually razor-sharp IMAX that is pointlessly ultra-realistic. It’s like looking through a window beyond which there is nothing worth seeing. Opens Oct. 11 at theaters valleywide. (PG-13)—MaryAnn Johanson

Jexi **
The addiction of 21st-century Americans to their smartphones is both ripe for satirical attack and a kind of obvious target, but I’m not sure anyone needed what amounts to a remake of Electric Dreams from the guys who wrote The Hangover. Jon Lucas and Scott Moore bring us the tale of Phil Thompson (Adam Devine), a San Francisco-based writer of click-bait lists whose entire sad life revolves around his phone—until the latest AI upgrade, called Jexi (voiced by Rose Byrne), demonstrates a consciousness, and a desire to kick his ass into shape. Given the creative team, you can expect that many of the gags are over-the-top crude, and a few of them are even kind of funny. But even the infinitely talented Byrne can’t find a variety of ways to keep monotone readings of “you stupid motherfucker” interesting, and Lucas and Moore’s filmmaking style—which consists of arbitrary uses of snap-zooms—adds little to the proceedings. By the time Jexi has gone full HAL 9000, and then resolved in a matter of moments, it’s become just another What Really Matters story tarted up with dick-pics. Opens Oct. 11 at theaters valleywide. (R)—SR

Lucy in the Sky *1/2
I’m not sure you can call what Noah Hawley does here “directing,” so much as an act of sheer relentless demand for attention. He tells the loosely-fact-based story of Lucy Cola (Natalie Portman), a NASA astronaut who returns from her first mission to space utterly transformed, to the point that that everything else—including her life with her husband (Dan Stevens)—becomes secondary to the goal of getting back above the earth. For a while, Portman does a fine job with Lucy’s sense of disorientation, and her reckless choices including beginning an affair with a fellow astronaut (Jon Hamm). But from early on, Hawley—making his debut feature after creating the nutso TV series Legion—tips his hand with ever-shifting aspect ratios and lenses that blur the edges of the frame, underlining every possible emotional beat so that Lucy gets lost in her own narrative. There’s a great story somewhere in here, about a paradigm shift so profound that it’s hard to connect to your previous world, but by the time we get to Lucy going fully out of control, the director has long since beaten her to the punch. Opens Oct. 11 at theaters valleywide. (R)—SR