Thematic ambition gets lost in the need to deliver fantasy spectacle 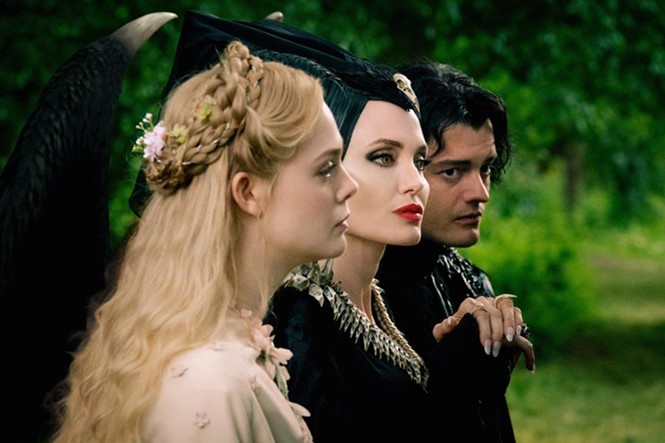 It’s a sneaky-clever, and possibly misleading, bit of business to give the Maleficent sequel the sub-title Mistress of Evil. After all, wasn’t the horned fairy (Angelina Jolie) redeemed in 2014’s Maleficent, transformed by her love for Aurora (Elle Fanning), the princess/adopted daughter she had sworn in a fit of vengeful rage to put to sleep forever? What a tiresome cheat it would seem, finding some arbitrary reason to make her the heavy yet again.

In Disney’s recent wave of feature-film cash-ins on its stable of beloved properties, the original Maleficent was a rare case of movie that at least tried to do something more interesting than tie a bow around nostalgia, so it’s a pleasant surprise to see Maleficent: Mistress of Evil also making some semblance of a creative effort. Because the real villain here is not Maleficent, but the use of scary stories about her for the purposes of demagoguery. It’s a tale of a nation’s leader manipulating fear of The Other to advance the pursuit of power, promoting an ethnocentrism that essentially gives the thumbs up to genocide. This is me eating a bucket of popcorn, awaiting the fuming Fox News editorial pieces about this movie.

Of course, there’s an idea, and then there’s the execution of said idea. Mistress of Evil builds its themes into the story of Aurora and her beloved Prince Philip (Harris Dickinson, replacing Brenton Thwaites, though I literally had to look that up to realize it wasn’t the same guy) finally deciding to tie the knot. That means a meeting between their respective parents—Aurora’s godmother Maleficent, and King John (Robert Lindsay) and Queen Ingrith (Michelle Pfeiffer) of Ulsted—in advance of the uniting of their respective kingdoms. And that’s where Ingrith engineers a “false spindle” operation, framing Maleficent for placing King John under a sleeping enchantment, and planning for a war between Ulsted and the realm of the fairies.

As was true with Maleficent’s allegory for the psychic fallout from sexual violence, Mistress of Evil isn’t exactly subtle about its underlying ideas. We also learn of the existence of other survivors of Maleficent’s race, the dark fey, living in exile and split between the ideas of one leader (Chiwetel Ejiofor) who wants only to live in peace, and one (Ed Skrein) who wants to fight physically against the oppressors; it’s the Professor X v. Magneto civil-rights-era metaphor once again, in an era where centrism feels harder to justify. Pfeiffer finds an effective place between obvious snarling evil and making the bloodthirsty racist sympathetic, but Jolie frequently gets lost in all the busy plotting. Considering the fact that her complex take on a canonical villain was the primary reason folks might want to return to this world, burying Maleficent’s story under all of the thematic ambitions, and without much of an arc to play, seems like a strange miscalculation.

It all builds to a grand battle between humans and fair-folk that feels like it lasts nearly the entire final hour of the movie, alternating between at least four different fronts of activity. Director Joachim Rønning—who brought a few memorable images to the otherwise chaotic and pointless Pirates of the Caribbean: Dead Men Tell No Tales—stages some eye-catching action, much of it built around the exploding red bursts of a chemical that incinerates fairies. That certainly helps Mistress of Evil deliver on the promise of being a fantasy spectacle, but it all but abandons the subtext that made it seem more intriguing at the outset. Once it’s clear that this is all a grand metaphor for authoritarianism built on demonizing outsiders, the screenplay has little to offer besides repeating the same notion in slightly varied ways. Maleficent here isn’t the Mistress of Evil conveyed in baseless viral rumor; she’s also not particularly interesting. While a corporate blockbuster might have designs on tackling the horrors of our real world, it first needs to address the inherent problems of being a corporate blockbuster.