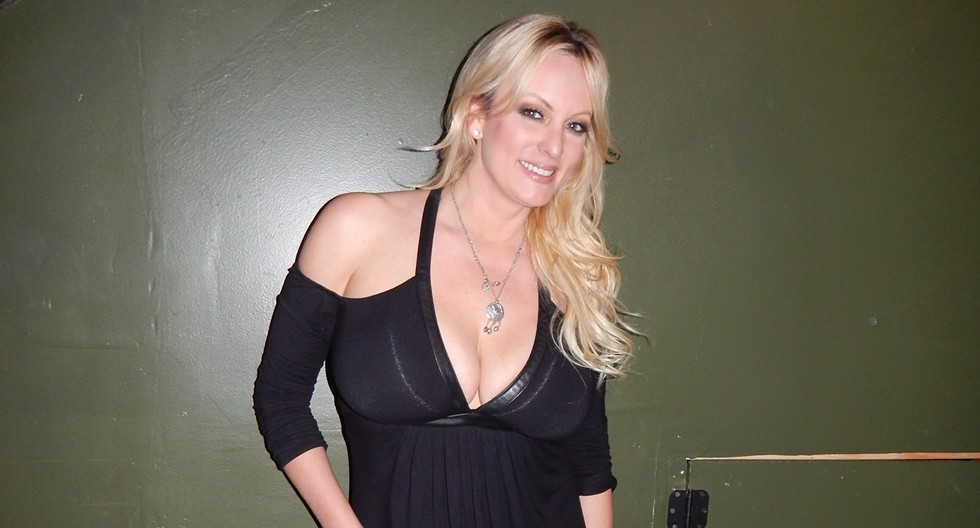 
The older couple sitting quietly at the end of one row? Definitely here to learn about Donald Trump.


The two bros seated in front of us, wearing fitted caps and bellowing idiotic phrases at the top of their lungs? No doubt fans of Daniels’—uh—let’s call it, film oeuvre.


Daniels was in town Tuesday for a comedy show and audience meet-and-greet, but I’ll admit that City Weekly music editor Erin Moore and I had no idea what we were getting ourselves into when we secured press spots. You’ll remember that about a thousand Trump scandals ago, this now-iconic porn star and stripper ended up embroiled in a legal dispute with our president when word got out that Trump’s henchmen slipped Daniels $130,000 to keep quiet about an alleged affair she’d had with Trump in 2006. Now here she was, in the flesh, ready to deliver what the Facebook event post billed somewhat vaguely as an “intimate evening” involving “storytelling, Q&A and comedy.”


Moore and I arrived at the venue a little before 8 p.m. We got beers and snagged a couple seats near the stage as a small audience trickled in—including the aforementioned drunk bros, one of whom greeted us by yelling in our faces, “I don’t vote, but damn I’m excited!”


“Amazing, a racist joke in 2019!” she yelled when Studley made an off-color crack about Chinese people.


Then Stormy came onstage. Decked out in a black baby-doll dress and knee-high boots, wielding a rhinestone-bedazzled mic, she greeted the cheering crowd and then immediately unloaded a couple shots on the two bros, comparing one to a diseased benefactor of the Make-A-Wish Foundation. “How did you get this drunk already?” she asked.


Moore and I quit our antics out of respect for Daniels. But the dudes’ heckling continued, getting more aggressive as her routine went on, and then one of her assistants came up and threatened to throw them out. “This is your last chance,” I overheard the man say. A brief but heated exchange ensued, and for a second there I thought a fist fight was about to break out among the rows of folding chairs. Eventually the bros seemed to admit defeat, grabbing their things and heading outside for a cigarette—never to return.

Daniels’ set was basically a comedy routine, with some audience-submitted questions thrown in. What did this entail, exactly? Well, it was… hilarious. And bizarre. And extremely graphic. Not that this would have ever happened, but let’s just say, theoretically, that if she were commissioned to give the very same lecture at BYU’s Reynolds Auditorium, it’s very possible that the hand of God would have literally thrust a lighting bolt straight into the sound system, just to prevent words like “hyperactive hemorrhoid,” “sympathy puker” and “Trump’s penis” from contaminating the hallowed halls.


Daniels told another story about her smartphone falling into an airplane toilet, the vacuum-powered flusher sucking it into a steamy cesspool.


“I don’t know what happened to me, but I went in after it. So I stick my arm in there—and the sucking gets more aggressive,” she said. “I had my leg up against the wall and it’s, whoooooo! I’m fishing around for my phone. It touched… things. Things that, in all my career in the adult business, I haven’t touched.


It’s not every day you get to meet someone who had sex with a sitting American president, so Daniels was happy to address certain anatomical details about the Orange-Faced One in questions that audience members submitted before the show.


“You guys are significantly less obsessed with Trump’s penis than other places I’ve been,” she said as she sorted through the stack of questions.


“Was it like a cheeto?” She didn’t have an answer for that one.


“Does Donald Trump smell like oranges or bullshit?” someone else asked. “Well, he’s full of bullshit, but surprisingly he actually smells like Old Spice and spray tan,” Daniels told the roaring crowd. “Lots of Old Spice. It’s kind of a trigger for me now.”


But would Stormy Daniels do it all over again? One of the audience members posed this very question during the show. Daniels’ reply was blunt.