The musician opens up about addiction and trying to stay physically and mentally healthy. 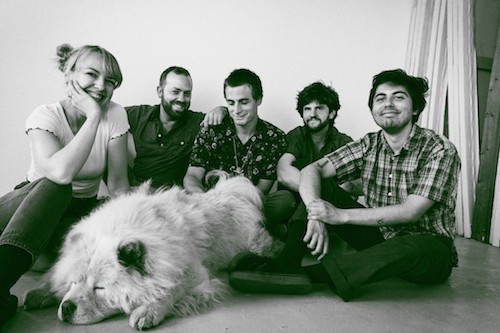 New York quintet Guerilla Toss have established themselves as purveyors of controlled onstage chaos, filling cozy rooms like Salt Lake City’s own Diabolical Records with violin-driven, visually enhanced post-punk fury that swings, slaps and screams. But on new EP What Would the Odd Do?, out October 18th on NNA Tapes, bandleader Kassie Carlson adds personal honesty to her outgoing persona, singing with passion about her journey through opiate addiction and open-heart surgery. Although the lyrics open up more, Guerilla Toss still blends everything from disco beats and raucous prog energy to trip-hop and hardcore, art-rock and dance-pop. But there’s something in those deep-seated admission that makes What Would the Odd Do? feel considerably different that Guerilla Toss’ past work—and Kassie Carlson opened up to City Weekly about it.

City Weekly: What Would the Odd Do? comes out Oct. 18, and your lyrics are far more personal on this EP than they have been in the past. What motivated you to go that route?

Kassie Carlson: It felt like a personal brain dump in a way. I’ve been so quiet about what I was growing through, and then I told everything really quick, all of a sudden, right away. I hope to talk more with people about what I went through because I think a lot of people are going through it. I want to open up a dialogue around this kind of thing that isn’t really talked about at all. But it does affect everybody—every inch of society, every class is affected by opiate addiction. Everybody knows somebody going through it.

CW: In the press release for What Would the Odd Do?, you say that drugs are often a “dude-associated thing.” What led you to feel that way?

KC: It’s kind of like a gross thing—this pure white, pretty image gets put on women, and people don’t think that such an innocent figurehead would become addicted to something as horrible as heroin. But really, it affects everybody, and it’s time to stop judging people that do become addicted. Terms like “junkie” are really fucked up, and we shouldn’t use that anymore. It’s not a choice; addiction is a disease.

CW: More broadly, you’ve said that many in the music industry don’t want to confront heroin addiction, whether it’s in men or women. What do you think causes that reluctance?

KC: Every generation experiences it differently, but addiction in the music industry is still pretty hidden. It’s still very taboo and scary to talk about it. Mental illness in musicians is still a huge thing, too—depression, burnout, anxiety—and ways of dealing with those things are often drugs. A lot of people go through addiction, but they just keep it quiet and keep it to themselves. But addiction doesn’t have to be this scarlet letter or this gross thing. It’s a disease—and it’s curable. It can be treated.

CW: Part of your treatment involved having open heart surgery, and you’ve talked about the class implications of navigating the health care system as a Medicaid patient. What was that journey like?

KC: I’m lucky, because it was free for me to get the heart surgery. But it was kind of like staying in a budget hotel. I had everything done at NYU Langone, with the surgery done by students and overseen by teachers. I was in the hospital for six weeks leading up to the surgery, but a day after it was done, they were like, “OK, now we’re going to send you to a nursing home for six weeks.” That was a crazy experience—I was sharing a room with a 100-year-old woman who was dying. I kind of felt like I was shoved in a corner and forgotten about. But at least I don’t have $100,000 in medical bills now. But if I were a middle-class mom who didn’t have Medicaid, my story would have been a lot different.

CW: It’s almost as important for musicians to talk about what it’s like to get health care as it is for them to talk about being addicted to drugs.

KC: Totally. So much of addiction is about the co-occurring conditions like depression and anxiety, which can be treated without it being a big deal. Drugs aren’t the only way out. A lot of musicians don’t have a lot of money and are living paycheck to paycheck, and don’t even know that they could get Medicaid. A lot of us are presenting our art and music without taking care of ourselves. There are things we can do to take care of musicians better. It can be as simple as having water and snacks in the green room, which should be a safe place to decompress before the show, not just a party zone. It’s crazy being on tour.

CW: How so for Guerilla Toss?

KC: Night after night, you’re in that party zone. People want to drink a thousand beers and stay up ‘til 2 a.m. with you, even if you have to wake up at 8 a.m. to drive eight hours. It takes a toll on you. Anything we can do for our musicians on the back end really goes a long way.

CW: So the lyrics on What Would the Odd Do? are quite different because they’re so personal, but is the instrumentation significantly different?

KC: Not really. As far as changing how the music sounds, it’s natural. We’re expressing ourselves—we’re like musical painters. We all have such diverse backgrounds and training in such diverse genres.

CW: My favorite song on the EP is “Plants”—I love the idea of plants being able to communicate on a plane that humans have yet to fully understand. Where did that idea come from?

KC: From two books that I read: What a Plant Knows and Hidden Life of Trees. Right now, lots of people are touching on the idea of plant communication. There’s even a red maple tree in the Harvard Forest in Massachusetts that scientists have hooked up to tweet out information daily. This day was 2 degrees warmer than this day 100 years ago. With climate change and everything, people are trying to understand plant communication more. It’s hard to talk about without sounding like a total hippie, but it’s important. Essentially, we are all connected.
CW: Guerilla Toss returns to Diabolical Records for its second show in the space of a year. What do you like about that venue?

KC: I really like the vibe at Diabolical—it’s a fun DIY feeling, so we’re happy to be back there and excited to share some of these new songs with you.