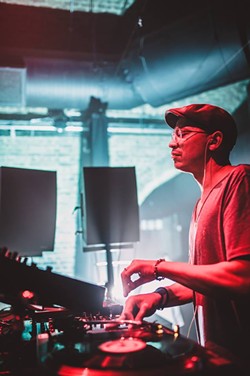 MONDAY 11/4
A Night with LTJ Bukem and guests J Law + C Wright
Get transported to a past, transformative time in music with the music of LTJ Bukem, a pioneer and major influencer in the early world of ‘90s rave music. This isn’t anything like the rave music played today, dominated as it seems to be by the advent of massive bass drops and digital-af glitching. Before dubstep was the order of the day, early rave music was dictated by DJs like LTJ Bukem (aka Danny Williamson), who came up in the music world with classical piano training and an affinity for jazz and funk. Working the early ‘90s rave circuit as a DJ during the years of acid house popularity, he moved into production of his own, honing a smoother, snappier, jazz-informed production style called drum and bass, with tracks like “Atlantis” surely being recognizable to even those who’ve never dabbled in anything house-adjacent. His experiments moved drum and bass music from its subcultural London home and transported it to clubs around the world. Williamson also began pushing into other musical fronts in the ‘90s, starting his label Good Looking Records—which housed more ambient and synthesizer-based music—and running a London nightclub called Speed. It’s quite insane that someone who played such an integral part of a decade-defining musical movement could be playing the Urban Lounge for free, but that’s the truth of the matter. If you’ve got any appreciation for techno music whatsoever, you’d be a fool to miss a display by one of it’s most influential players. The Urban Lounge, 241 S. 500 East, 9 p.m., free, 21+, theurbanloungeslc.com