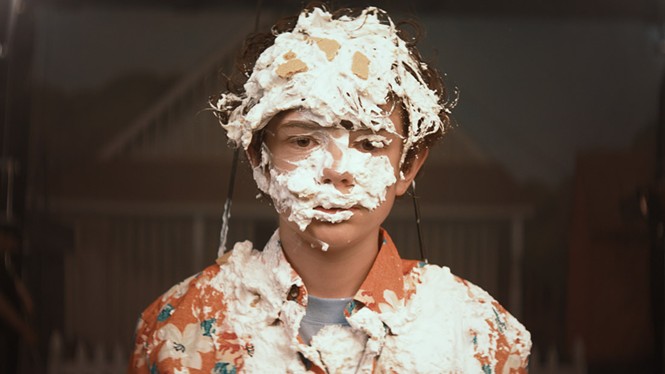 Dark Waters ***
Todd Haynes does Erin Brockovich? The director of delicate dramas about repression (Carol, Far from Heaven) doesn’t seem the likeliest choice to head up a social-justice drama like that of the real-life lawyer (Mark Ruffalo) who took on chemical giant Dupont over the poisoning of [checks notes] the entire planet and every living creature on it. If you like these sorts of movies, you’ll like this one, which is solidly performed by an incredible cast, also including Anne Hathaway as The Wife, Victor Garber as The Corporate Baddie and Tim Robbins as The Law Firm Boss. It is more keenly observed as a horror story than these kinds of films usually are: The 1990s-era farmer who jump-starts this legal odyssey with VHS tapes of his homegrown animal necropsies and keeps diseased cow organs wrapped in kitchen foil is right outta The X-Files. Ruffalo’s journey from naïve corporate defense attorney—who genuinely seems to believe (at first) that big companies can “self-regulate” and wouldn’t lie to cover their asses—to gung-ho SJW is classic, well, Ruffalo. But it still doesn’t feel like a Todd Haynes film. Opens Dec. 6 at theaters valleywide. (PG-13)—MaryAnn Johanson

Frankie ***
Maybe it’s because I’ve grown tired of the whole Twitter-fied discourse of whether or not blockbuster superhero movies count as cinema—and I just wanted to watch a movie where grown-ass adults did grown-ass stuff—that I found myself quite entranced by Ira Sachs’ lazy, laconic and visually luscious latest. Even though it’s been getting lukewarm reviews for its minimal plot and snail’s-pace-like rhythm, this picturesque story—about a terminally ill, aging actress (Isabelle Huppert, surprisingly defrosted) gathering family and friends for a vacation in an endlessly idyllic Portuguese resort town—is a soothing, unabashedly mature reminder of how important slowing the fuck down and appreciating everything around you is once you get older. Huppert’s screen icon keeps her illness close to the vest, but of course she’s not the only one going through personal drama that’s being kept on the low. Brendan Gleeson, Marisa Tomei, Greg Kinnear and Jérémie Renier are just a few of the loved ones who are trying to keep a brave face, while they’re also trying to get their shit together. Opens Dec. 6 at Broadway Centre Cinemas. (R)—Craig D. Lindsey

Honey Boy ***
Next to Kristen Stewart, there hasn’t been an actor with a wackier career trajectory—from smart-ass kid star to rising matinee idol to scandal-attracting bad boy to fascinating indie player—than Shia LaBeouf. He goes semi-autobiographical for his latest project, which he also wrote. Lucas Hedges plays his stand-in, a rage-filled actor who gets sent to rehab and tries to rebel against the therapy that might take him back to his younger years, when he was just a kid (played by Noah Jupe) working in Hollywood, getting pushed too hard by his recovering-addict, ex-clown dad (played by LaBeouf). With help from director Alma Har’el, LaBeouf uses this lyrical, engaging film to virtually purge the demons that made him such an erratic, unpredictable public figure over the years. And while it goes to the surrealism well a bit too often—you could make a lengthy YouTube compilation of all the times Hedges wakes up from a bad dream—you sense that LaBeouf had to make this, so he could finally be at peace, and get back to being the captivating performer he’s becoming quite good at. Opens Dec. 6 at Broadway Centre Cinemas. (R)—CDL

Knives and Skin **
I’m not saying writer/director Jennifer Reeder deliberately set out to make a copycat version of Twin Peaks’ first season, but if all it makes you think about is Twin Peaks’ first season, that’s not a good thing. This story too begins with the mysterious disappearance of a small-town high school student, Carolyn Harper (Raven Whitley), then winds its way through the various dramas in the lives of people who might be suspects: Carolyn’s hysterical mother (Marika Engelhardt); a mild-mannered classmate (Grace Smith); the bad-boy who last saw her alive (Ty Olwin). That alone would be a bit too familiar, before you get to all the random weirdness—downbeat choral versions of ’80s pop hits; the school principal buying his students’ used underwear; a talking shirt; clownilingus (don’t ask)—and hints of the supernatural associated with the central crime. It all goes absolutely nowhere beyond a few superficial visual pleasures and one absurdist line worth a guffaw, without the great actor moments and puckish humor that Twin Peaks stirred into its surrealism. Instead of feeling like its own vital creation, it’s just dead, wrapped in plastic. Opens Dec. 6 at Megaplex Jordan Commons. (R)—Scott Renshaw

Playmobil [zero stars]
We could blame the enormous success of the Lego movies for the existence of this, but it’s plain that no one involved bothered to steal even a smidgen of the delightful wit and keen self-awareness of that other franchise. Because here, we get nothing more than an insipid exercise in corporate filmmaking and mercenary marketing that reads more like an ’80s Saturday-morning-cartoon attempt to sell toys than an actual movie. Crotch-injury “humor” and deeply terrible songs—yes, this is, horrifically, nominally a musical—accompany the journey of two human siblings (voices of Gabriel Bateman and Anya Taylor-Joy) as they get sucked into the various realms of Playmobil toys ... in plastic bodies with clamshell hands. Here’s the ancient Roman stuff, where everyone seems to think they're engaged in Gladiator cosplay; here the Wild West; here be dragons; here’s a guy (Jim Gaffigan) who … drives a food truck? It’s all pointlessly random and head-smackingly dumb, even when it sounds on paper like it might be funny (Daniel Radcliffe as an idiot James Bond knockoff called Rex Dasher, anyone?). It’s joyless, lifeless and aimless. Opens Dec. 6 at theaters valleywide. (PG)—MAJ

Waves *
Aww, hell no. I really liked wunderkind filmmaker Trey Edward Shults’s second film, the unclassifiable semi-horror It Comes at Night, but his latest? What the shit? This is the tale of high-school star wrestler Tyler (Kelvin Harrison Jr., so good in Luce, and good here, too, but misused) and his struggles to overcome an injury that might sideline his athletic career and—perhaps worse—disappoint his strict dad (Sterling K. Brown). These frustrations, and others, culminate in a moment so terrible, so life-changing that … well, no spoilers, but this is a gorgeously, cinematically arty apologia for a disgustingly ordinary outburst of male rage and entitlement. And we’re meant to see it as a “mistake”—so “tragic”!—because a “good kid” did it, as if that isn’t an excuse we hear all the time. This is a tale that places the loss of the dreams, hopes and ambitions of a teenage girl below those of a teenage boy, and then wants to fool us into thinking it’s not doing that with a wholly unwarranted narrative coda suddenly focusing on Tyler’s young sister (Taylor Russell). We are not fooled. Opens Dec. 6 at Tower Theatre and Megaplex Jordan Commons. (R)—MAJ