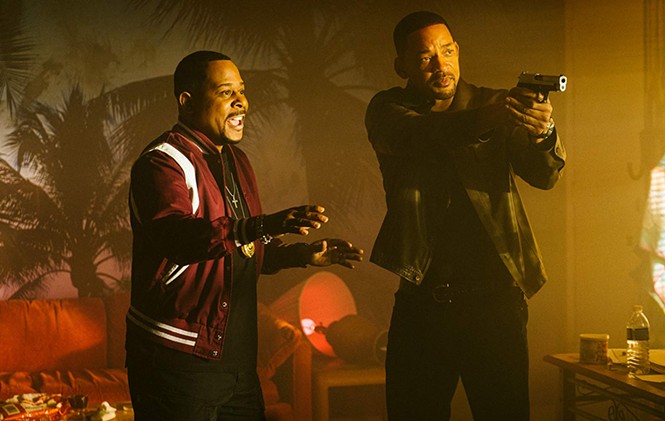 Bad Boys for Life ***
I’m happy to report that the latest, long-awaited installment in the Will Smith-Martin Lawrence action franchise isn’t a catastrophe. (Be honest: Didn’t the January release date have you kinda scared?) After the last sequel, where the stars reunited with director Michael Bay and made a crass, craven carnage-fest nowhere near as fun and hilarious as the original, I know I wasn’t optimistic about this one. Thankfully, Belgian filmmakers Adil El Arbi and Bilall Fallah are behind the camera, and even they realize that—although they throw in several, over-the-top action sequences—it’s the comic moments between Smith and Lawrence that people come to see. And both stars certainly bring their shit-talking A-game to this one, as the aging cops team up with a bunch of young, tech-savvy officers (including Vanessa Hudgens and Alexander Ludwig) in order to take down some killer baddies. Although clumsily plotted at a couple points (not to mention that the big twist may remind people of another, recent Will Smith movie), this has just the right amount of enjoyable junk to keep it from becoming the straight-up trash we usually expect from a Jerry Bruckheimer production. Opens Jan. 17 at theaters valleywide. (R)—Craig D. Lindsey

Cunningham ***1/2
Wim Wenders’ 2011 Pina provided a terrific template for a documentary about a choreographer: Commit to making it about the dancing. Director Alla Kovgen’s profile of choreographer Merce Cunningham does include material that could be considered conventional in a biographical documentary, including archival footage and interview snippets with both the late Cunningham himself and many of his closest collaborators, including Andy Warhol, Robert Rauschenberg and Cunningham’s professional and personal partner, composer John Cage. But the majority of the running time is devoted to re-creating Cunningham’s still-fascinating dances themselves, bringing new vitality to works sometimes criticized for their chilly precision by staging them on a high-rise rooftop, or in the middle of a stand of trees, with Kovgen’s camera prowling the perimeter or getting right in the middle of things. There’s enough context from the interviews to provide a sense of Cunningham the man, like his resistance to “what it is it about” simplistic interpretations. But the real interest here, as Cunningham himself would approve of, is experiencing the dance—fitting for a man who says, “I don’t describe my work; I do it.” Opens Nov. 17 at Broadway Centre Cinemas. (NR)—Scott Renshaw

Dolittle *
It’s easy to mock kid-focused films that rely on fart jokes and general anarchic stupidity. It’s easy, and it is also right. This latest interpretation of the talk-to-the-animals doctor (Robert Downey, Jr.) is a mopey recluse, holed up in his estate with his critter friends mourning his lost wife. Along comes a young courtier (Carmel Laniado) with a mission for him to save the ailing Queen Victoria, and also there’s an animal loving fellow (Harry Collett) who wants to be Dolittle’s apprentice. A quest for some mysterious something-or-other ensues, with dozens of familiar voices saying witty things like “that’s gotta hurt” when a gorilla knees a tiger in the balls. It’s frantic and clearly an attempt at salvaging a mess of a script, but the crowning catastrophic glory is Downey’s performance, in which he answers the question, “what would it sound like if someone were trying to do a Scottish accent for 100 minutes while falling asleep?” We should be angry that so much money is thrown at something this misbegotten, and that we’ve apparently decided children don’t deserve any better. Opens Nov. 17 at theaters valleywide. (PG)—SR

Les Misérables ***1/2
No, it’s not the latest adaptation of Victor Hugo’s novel, in either musical or non-musical form; instead, this International Film Oscar nominee from France is a grimly fascinating look at how little has changed in 200 years. Co-writer/director Ladj Ly heads into Hugo’s old stomping grounds of Paris’s 93rd Arrondissement circa the present day, where police officer Stéphane Ruiz (Damien Bonnard) has just transferred—and discovered that his new colleagues have an antagonistic relationship with the mostly Muslim immigrant locals. Much of the central plot revolves around an incident of excessive police force, and the attempt by Ruiz’s partners to recover video evidence of the crime, giving the story a resonance that transcends the specifics of this location. But Ly imbues this location with its own unique flavor, from the community leaders who serve as de facto neighborhood bosses, to the boiling fury among many of the residents over their circumstances. As much as it works as a tension-packed procedural about one good cop trying to fight the system, it also builds to a grim conclusion that suggests this is still a place where revolution is in the air. Opens Jan. 17 at Broadway Centre Cinemas.  (R)—SR

Varda By Agnès ***1/2
You gotta hand it to the late, French New Wave filmmaker Agnès Varda: She wasn’t gonna let anyone else tell her life story in some half-assed fashion. And, before she passed away in March of last year at the age of 90, she rounded up all of her footage to basically give an on-camera masterclass in filmmaking. With Varda literally taking center stage, discussing her cinematic journey in front of several theater audiences, she unspools clips from her filmography, including all the biggies: Cleo from 5 to 7; Vagabond; The Gleaners and I; her Oscar-nominated Faces Places. But she also explores her history as a versatile visual artist, starting out as a photographer and spending most of her later years doing elaborate art installations. More importantly, Varda shows audiences—whether diehard fans or curious folk who want to know more about this quirky old lady with the punk-bowl haircut—how she brought playful inventiveness to everything she did, even in her most serious work. She lets everyone know that if you’re going to create cinema that will either challenge or infuriate viewers, you better have a good-ass time while doing it. Opens Jan. 17 at Broadway Centre Cinemas. (NR)—CDL