Guv addresses the ribbed-for-their-pleasure elephant in the room during monthly press conference. 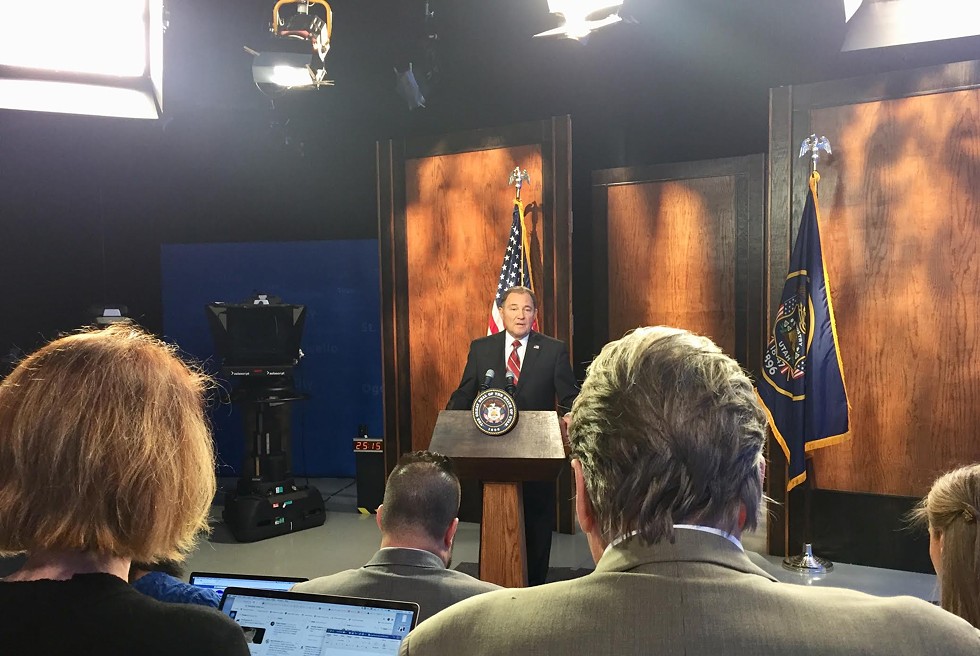 It was the lubricated headline spread around the world. Last Wednesday, objecting to the “use of sexual innuendo as part of a taxpayer-funded campaign,” Gov. Gary Herbert pulled 100,000-plus condoms packaged in sleeves emblazoned with messages that played on Utah themes, like “Put Your Arch Into It,” “SL, UT” and “Toss the Jell-O Salad.”


“I think we all recognize the importance of HIV awareness and AIDS prevention,” Herbert said, prompted by FOX 13’s Ben Winslow during his monthly news conference. “I don’t think anybody doesn’t agree with that, that I know of.”


From the state’s perspective, there's a right way to approach a campaign of this nature, as well as a wrong one, Herbert continued.


“As I found out about this, (1), it hadn’t gone through the proper protocol and procedures to get a thumbs up on going ahead with it. And (2), as I read the sexual innuendos and double-entendres and kind of the crass messages on the packages, I thought, ‘I don’t know if this is what we want to do as a government.’”

The Great Condom Conundrum
Gov. Herbert halted the distribution of 100K-plus condoms. Now what?
Condoms emblazoned with Utah-centric slogans like “Uintah Sex?” and “Put Your Arch Into It” were pulled by order of Gov. Gary Herbert on Wednesday.
By Enrique Limón
Buzz Blog

Last week, Michael Sanders, a member of the Utah HIV planning committee, who came up with some of the cheeky puns, told City Weekly the designs were “meticulously approved” by the Utah Department of Health, and said the controversial contraceptives were “funded 100%” by combined grants from the Centers for Disease Control’s Integrated HIV Surveillance and Protection programs and the Ryan White HIV/AIDS Program.


Today, referring to “one of the critics of [his] proposal,” Herbert addressed the funding sources. “Clearly, the ignorance is profound in thinking that somehow, because it went through the federal government, that it’s not taxpayer’s dollars that are generated even here in Utah,” he said.

“It wasn’t about giving out condoms,” Sanders, who personally placed around 500 in places like The Sun Trapp, the Utah Pride Center and the Logan Pride Foundation, said. “It was about creating something that people would pick up that would have the website address on it to direct people to [it] to get HIV information. We could have done mouse pads or pens or something, but we did condoms. In order for people to pick up a condom—especially in places that [offered] condoms already, they needed to have some kind of a punch to them.”


The punch was lost on Herbert.

“Government ought not to do something that, you know, many of the people think [is] offensive,” the governor said during his conference. “... The word ‘SLUT’ in the age of Me Too? All of us ought to be offended by that.”


Referencing similar campaigns in other states, Herbert said that if his staff had been looped in on the creation of the puns, the outcome “probably” could have been different.


“I was certainly not consulted,” he said. “If we had veto power, there might be some [designs] that would be acceptable as far as the cover packages … and others not. I’ve seen some from Wyoming and Alaska—I don’t think they were nearly as offensive as what we had in some of ours here in Utah.”


Still, adding that those responsible for the slogans weren’t “trying to be nefarious and do something stupid,” Herbert recognized the campaign’s potential.


“I get it. I understand [what] the intentions are with a little bit of humor to bring about better awareness,” he said. “I just think we went over the line in Utah. So, back to the drawing board.”


What about the confiscated condoms? In a statement shared with City Weekly, UDOH’s Johnson said the agency launched a “concerted effort” to recover all those distributed before Herbert’s order. As far as the Utah-branded “wallets” on the remaining 85,000-plus, those “will be removed and destroyed. The latex condoms will then be redistributed to partner agencies as requested per normal procedures.”


Following the department’s “review of all creative aspects” involved in the campaign, HIVandMe.com was reinstated this week—but the frenzy coined by Sanders as “condomgate” was already in full force. The advocate said he was flooded with requests from people clamoring for one of the risqué rubbers.


“I’m going to take what I have, put them together, frame them and auction them off for charity,” Sanders said on Friday. “I just want to make sure I don’t get in trouble for doing it first.”


His message caught on. Full Beanie Baby craze levels peaked yesterday when a condom collector’s set featuring all 13 designs was listed on eBay by a seller going by the name pinkchampagne. Per the auction description, proceeds are destined to benefit state “HIV prevention and education programs.”