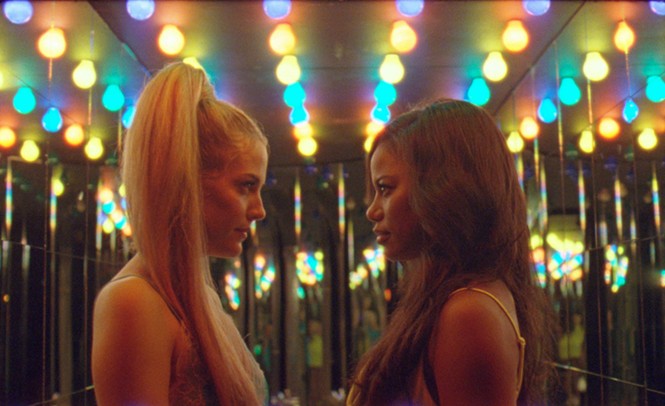 Zola *** [U.S. Dramatic]
“Based on the tweet thread by ...” feels like a cruel joke version of storytelling in the social-media age, but director Janicza Bravo and her co-writer Jeremy O. Harris pull out the stops in providing a spark of punky energy to this probably kinda mostly true story. In October 2015, waitress A'Ziah “Zola” King (Taylour Page) meets Stefani Jezowski (Riley Keough) while at work, and the two become instant BFFs. Stefani invites Zola on a trip to Florida where the two occasional pole dancers can do some work—but it's another kind of work that Stefani is really up to. Nicholas Braun and Colman Domingo fill out the supporting cast, and all four of the principals are terrific at fleshing out this propulsive caper narrative. It's really all about the way Bravo conveys the increasing craziness of this story as it was tweeted in real time, from direct address narration, to a sound design foregrounding familiar digital-era noises, to instances of unreliable narration. She and Harris never try to push Zola into some kind of big statement about Who We Are Today, and fittingly for something inspired by a tweet thread, it basically just stops rather than having an actual ending. Like Twitter itself, it might not offer much substance, but someone who knows what she's doing can make it a hell of a fun diversion. (Scott Renshaw)

Collective **** [Spotlight]
The Oscar-winning Spotlight is an excellent movie, but it describes events from about 15 years earlier that already were, in broad outlines, well-known to its audience. Part of what makes Collective better, from an American POV at least, is that these muckrakers are going we know not where. Also, it’s an embedded real-time documentary. To switch examples, imagine a film team following the Washington Post’s reporters from 1972 to 1974. And then, Collective gets even better. The precipitating event is a 2015 fire at a Bucharest nightclub, in which 27 people died on the scene and 37 more in hospital. Director Alexander Nanau follows reporters from the Sports Gazette (yes, a sports paper) as they investigate why the large later-death toll—a feature of medieval hospitals, not modern ones—happened. The trail leads all the way to the top of Romanian government, then Nanau’s masterstroke (or fortune) happens: His team gets embedded with a new health minister who vows to change Romania’s health care system in light of the findings. And that trail leads throughout Romanian society and becomes a political issue anew. Graduation and The Death of Mr. Lazarescu didn’t tell the half of it. Collective is thrilling, disturbing, nauseating (literally, in one place), exploitative (arguably) … and essential. (Victor J. Morton)

The rarity of quality family films is a particular soapbox of mine, and everything about Brenda Chapman’s Come Away—a beautifully appointed, patiently-paced period piece linking Peter Pan and Alice in Wonderland, with magical-realist flourishes and a willingness to confront difficult themes and consequences—appears to invite me along. The multiracial cast includes Angelina Jolie and David Oyelowo as Rose and Jack Littleton, loving parents of three high-spirited children: Alice (Keira Chansa), Peter (Jordan Nash) and the unallusively named David (Reece Yates), who spend hours in imaginative play in the lush forest surrounding their home. Yet it goes increasingly off the rails, wallowing in heartache until no satisfying redemption is possible, partly because the film’s magic is too firmly rooted in pretending for a fairy-tale denouement to be anything but unpersuasive pixie ex machina—or plain denial. All the adults are so flawed the children can’t rely on them, and, while a racist aunt’s contempt for Jack’s “lower-class” origins is condemned, Jack’s family is shady and brutal, and his own checkered past is far from forgotten. Lewis Carroll gets short shrift, while Peter lacks utterly the feral heartlessness of Barrie’s tragic hero. Almost wholly absent is the spirit of whimsy—the very soul of both Carroll and Barrie. (Steven D. Greydanus)

Rebuilding Paradise ***1/2 [Documentary Premieres]
On Nov. 8, 2018, the catastrophic “Camp Fire” in Northern California killed 85 people and virtually eradicated the town of Paradise; director Ron Howard's emotionally devastating documentary chronicles not just the horrific disaster itself, but a year in the life of those who survived, trying to put their lives and their town back together. The opening 10 minutes are almost unbearably tense, using video taken by residents as they flee the inferno, many of them wondering out loud if they're about to die. But it's just as engrossing once the immediate threat is over, and Paradise residents cope with every possible kind of fallout from the fire: toxic runoff that renders the water undrinkable; FEMA regulations that force people to move back off of land they just returned to; families broken up by the stress of the events. Howard doesn't shy away from emphasizing the responsibility of Pacific Gas & Electric's negligence in maintaining equipment for causing the fire, but he also places this event in the context of other factors, including forest management practices and lack of action on climate change. As much as the individual personal stories here might bring you to tears, the coda suggests a world in which millions more like it are becoming an everyday occurrence. (SR)

The Climb *** [Spotlight]
Discovering a fresh comedic sensibility is a particular festival pleasure—and even if it’s unevenly executed, this oddball chronicle of a dysfunctional friendship does offer something that feels fresh. Director/co-writer Michael Angelo Covino and co-writer Kyle Marvin co-star as Mike and Kyle, two buddies-since-high-school who find their relationship tested over the course of several years by romantic entanglements, betrayals and tragedies. The story is broken into seven fairly episodic chapters, with predictably varying results; the first, involving Mike and Kyle bicycling up a hill, might even be the strongest. But the characters—Kyle the earnest sadsack, and Mike the sketchy a-hole—hold things together, providing a solid portrait of bro-panionship that somehow continues to transcend the events that divide them. Covino feels a bit less sure of himself as a director than as a writer, using showy long takes and time-lapse dissolves that feel more like an effort to be taken seriously than something intrinsic to the moment. As a piece of writing, though, The Climb keeps serving up laughs wrapped in a curiously affecting look at who you choose to rely on when everything else is chaos. (SR)

... and that grade would be a half-star higher if there were any obvious reason for the two halves of Lawrence Michael Levine's Black Bear to be in the same movie. Or in a movie called Black Bear (one appears, arbitrarily and pointlessly at the end). But those two halves are each worthy, the first especially so. Part one, “The Bear in the Road,” is a taut three-hander on a married couple (Christopher Abbott and Sarah Gadon) hosting actress-director Aubrey Plaza at their remote cabin. All three, especially the married couple, are hyper-competitive and contentious in a knowing “actually...” way: “your mother’s been trying to sell it for years / 18 months / two years ... years.” It’s passive-aggressive comedy, and very funny. Naturally, jealousy and infidelity percolate, until it comes to an abrupt end. Enter part two, “The Bear at the Boathouse,” which is about the shooting of a marital quarrel scene and flanked by pillow shots showing Plaza at work as a writer, which inevitably invites all kinds of meta-cinema critical doodling. It features the same actors on the same set (only with lighting, rigging and crew), but playing different roles. It’s also shot and acted in a very different style—more loosey-goosey camera, hectic and fast movement, improv-style dialogue. It’s fine, but how it relates to part one? I have no idea. (VJM)

The Assistant *** [Spotlight]
Director Kitty Green was last at Sundance with the great Casting JonBenet, and while that film was rather stylized for a documentary, she uses a similar style in a fictional setting—although who are we kidding, we all know this is a Harvey Weinstein story. The resulting feeling is very different—almost a frigidly detached, degree-zero mood, often employing clinical God’s-eye overhead shots. The style is used in a film that consists almost entirely of one day’s worth of studio-assistant’s mundane tasks (punctuated with casual rudeness about, e.g., chicken vs. turkey), centered around Julia Garner’s withholding performance as Jane in the titular role, which creates a blankness at the center as its own presence. The brew had me thinking in the heady company of Jeanne Dielman, only there’s no catharsis or eruption here. There is a late scene that threatens these things, as Jane describes some of the hints and incongruities she’s been noticing about The Boss, who’s never seen though constantly referred to and bro-joked about. What happens in that scene is anti-climactic dramatically, but the only possible outcome historically. (VJM)

Charter **1/2 [World Dramatic]
A mother struggles with fears for her children’s welfare in the sophomore feature from Swedish filmmaker Amanda Kernell (Sami Blood). The custody verdict is still pending, but for Alice (Ane Dahl Torp), apprehensively returning to the small town where until recently she lived with her ex-husband Matthias (Sverrir Gudnason) and their two children—sensitive young Vincent (Troy Lundkvist) and disaffected teenaged Elina (Tintin Poggats Sarri)—it’s like Matthias has already won. Not only has he changed their numbers, he violently denies her access to the kids, tries to drive her out of town, and has apparently poisoned the community—and possibly Elina—against her. Persuaded by a brief, alarming nocturnal call from Vincent that something is dreadfully wrong, Alice plucks the kids from school, and, in a nerve-wracking sequence, steals them away to a Canary Islands charter resort to reconnect with them and unravel Vincent’s fears. Scene by scene, the main action is involving, the emotions persuasive; every crack in Elina’s hostility, every rare and reluctant smile, is a ray of hope, and the moments of happiness they enjoy, however fragile, are precious. Yet the film’s determination to guard its secrets leads to contrivance, and the reversals of the bleak final act are less than fully persuasive. (SDG)

The Earth Is Blue As an Orange **1/2 [World Documentary]
On paper, it’s a fascinating meta-documentary concept: In war-ravaged Ukraine, recent high-school graduate and would-be cinematographer Myroslava Trofymchuk casts her family in a dramatized version of the real-life traumas experienced by those living in the country, while she applies to a university program in her chosen field. Director Iryna Tsilyk offers a few striking moments, from the actual drama of dealing with a nearby artillery attack, to the more intimate tensions of family members squabbling over exactly how the fictional version of their experience will look. The whole thing just feels a bit thin, however, providing too little real sense for our principal characters, or how they feel about living through life-threatening situations, or how re-living those situations through filmed re-creations affects them. The idea does more heavy lifting than the execution manages, right up to the conclusion where a screening of Myroslava’s finished movie plays out not through our chance to see what she has actually done, but through the often-enigmatic reactions of those who are watching it. A “fly on the wall” approach only really works when those multi-faceted eyes show us something worth looking at. (SR)