Happy Happy Joy Joy: The Ren & Stimpy Story ***1/2 [Documentary Premieres]
“Warts and all” documentaries have an inherent intrigue, but there’s a particular jolt that comes from what this story ultimately explores. On the most basic level, it’s the story of the groundbreaking 1990s Nickelodeon cartoon series The Ren & Stimpy Show, focusing on creator John Kricfalusi and his team of innovative animators. There’s plenty of material simply involving the show itself, from its near-immediate popular and artistic success, to Krisfalusi’s firing from the show, to the many other creators influenced by its style. But the ability of directors Ron Cicero and Kimo Easterwood to get Kricfalusi himself on camera makes it possible to dig into the perfectionism and abusiveness towards collaborators that led to the show’s implosion, as well as the stories that ultimately emerged about his grooming of and long-term sexual relationships with underage girls. It’s a rare #MeToo-era film that allows us not just to look into the face of a sexual predator as he responds to what has been said about him, but to wrestle with how we are supposed to think about wildly creative works once we know the darkest truths about those who created them. (Scott Renshaw)

The Last Thing He Wanted * [Premieres]
On Tuesday afternoon, I told a friend that I’d given every one of the 17 films I’d seen here to that point at least two stars: “There’s nothing I strongly dislike.” The response: “You haven’t seen The Last Thing He Wanted yet?” Prescient. To call this a mess is too harsh on your newborn’s diapers, on the frat house at 4 a.m. on a weekend, on the inside of the post-explosion microwave. We’re supposed to believe that a hard-bitten “Atlantic Post” reporter (a miscast Anne Hathaway) who is eager to expose the Reagan administration on Nicaragua also would take over her father’s Central American gun-running business. We’re supposed to believe she will hop into the sack within hours of seeing a smooth-faced white American (Ben Affleck, playing an avatar wherever the plot needs one). Even apart from the illogic, it’s also just plain unintelligible moment-to-moment, and overstuffed with side “issues” (what were you thinking, Toby Jones?), though I suppose it’s some kind of creativity that the “neglected wife” role is here filled by a daughter. The only redeeming feature in the film is Willem Dafoe, and even that is him just willemdafoeing things up, as if he was dropped in from another movie. Undoubtedly a better one. (Victor J. Morton)

Nine Days **1/2 [U.S. Dramatic]
Many films have tackled judgment after death; this is the first I’ve seen that proposes an evaluation process weighing the worthiness of preexistent human souls (or representations of potential souls) to be born on Earth. Writer-director Edson Oda, in his debut feature, imagines this evaluation as an extended job application playing out in a desolate wasteland where candidates materialize—and dematerialize if rejected—in between answering existential head-scratchers like whether you would kill your son in a concentration camp to save the rest of the prisoners. Those are the kinds of questions, anyway, asked by Will (morose, officious Winston Duke, evoking Lawrence Fishburne in Akeelah and the Bee), a former human being turned otherworldly bureaucrat; other interviewers have different criteria. Nine Days thus becomes a meditation on what it means to be human, with the contrasting dispositions of various candidates (Bill Skarsgård, Tony Hale and Arianna Ortiz, among others) offering possible answers—though Zazie Beetz’s beatifically enlightened Emma is clearly meant as the ideal potential soul, and Will’s frustration with her tells against him, not her. The philosophical cogitations are less profound than the movie thinks, and a more complex, fallible Emma could have been more compelling. Oda sticks the landing, though, a particular achievement in so offbeat a film. (Steven D. Greydanus) 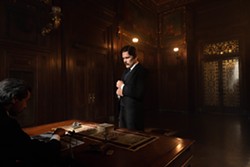 Tesla ***1/2 [Premieres]
There is a scene late in Tesla a mere description of which is a litmus test: Ethan Hawke, in the titular role of a man who died in 1943, mournfully sings the 1980s smash “Everybody Wants to Rule The World,” off-key in the slowed-down tempo of a man who quite clearly didn’t want to. Are you sold yet? If not, would it help if I mentioned there’s also an ice-cream fight with Thomas Edison, played by Kyle MacLachlan? No? Then let me try the “intellectual” approach if the “fawesome” one doesn’t. Director Michael Almereyda goes full Brechtian here, ideal for a subject who was, in this telling anyway, a visionary who had neither the personal charisma nor the business savvy to succeed under capitalism (unlike Thomas Edison, JP Morgan, George Westinghouse, Sarah Bernhardt and others). JP’s daughter Anne is both a relatively natural historical role and a narrator from the future with an iPhone, who tells us that the ice-cream fight (and other scenes) probably didn’t really happen, and helpfully lets us know what $100,000 is “in today’s money.” And she assures us that we are now living in the world Tesla dreamed (instantaneous communication, for example), almost as if there’s a logic to History. (VJM)

Sylvie’s Love **1/2 [U.S. Dramatic]
Glossy, rich cinematography, glamorous period costuming and production design, and a pervasive, jazz-heavy soundtrack full of shrewd needle drops make Eugene Ashe’s second feature a ravishing sensory experience and a nostalgic celebration of the world and cinema of the late 1950s and early ’60s. In such a melodramatic setting, a dashing musician like Nnamdi Asomugha’s saxophonist Robert and a vivacious music lover like Tessa Thompson’s Sylvie can hardly help falling in love, even if Sylvie is engaged to a wealthy doctor and her parents consider Robert beneath her station. Sylvie and Robert’s connection, though conflicted, is magnetic; still, decisions must be made. The problem with the bad decisions that follow is not that they’re implausible, but that—as attested by the vicarious delight of Sylvie’s cousin Mona (Aja Naomi King) every time Mona’s “You didn’t!” elicits a confidential “We did”—we’re meant to root for our soulmates even after Sylvie’s engagement leads to marriage and family. “Life’s too short,” Robert says, “to waste time on what you don’t absolutely love.” If Robert and Sylvie consistently followed that credo, there would be no movie; what they actually do would often lend itself more to a cautionary tale than a swoony romance. Late melodramatic complications unnecessarily extend the story, making for an anticlimactic denouement. (SDG)

Natalie Wood: What Remains Behind **1/2 [Documentary Premieres]
It’s impossible to either love or hate this kind of competent, conventional biodoc of a great star. This one falls into three segments of a half-hour each—covering, in order and more or less, her life and family, her career and her death. The on-screen interviewer is daughter Natasha Gregson-Wagner, who also sometimes directly talks to the camera herself; the talking-head interviews are the usual friends and collaborators, led by her father, Robert Wagner. This creates both an easy intimacy and some journalistically awkward (if emotionally telling) moments when she calls him “Daddy.” It also makes the unavoidable references to Wood’s unseen sister Lana also feel like family-quarrel score-settling. There’s also nothing new on Wood’s untimely death, though that very fact produces the film’s only real tension. Jill St. John notes (correctly) about the decades of tabloid headlines, accusing Wagner of killing her, that people want to believe there’s always “something more” even if there isn’t. But if there isn’t, a movie like this loses part of its potential reason to exist. Still, if this gets the name “Natalie Wood” out there to a new generation and directs them to Miracle on 34th Street, Rebel Without a Cause, West Side Story and others, it’ll at least have done the Lord’s work. (VJM)

Feels Good Man *** [U.S. Documentary]
In the 21st century online world, is it even possible anymore for creators to control the way their work can be co-opted, memed and otherwise manipulated? Arthur Jones’ documentary—following the evolution of Pepe the Frog from amusing creation of cartoonist Matt Furie into symbol of alt-right ideology—doesn’t exactly provide an encouraging answer. Jones profiles Furie himself, then delves into a weirdly fascinating history of 4Chan and the online subcultures that crafted a bizarre nexus between the googly-eyed amphibian and the Trump presidential campaign. Those details are slickly presented in a lively style that employs plenty of colorful animation, heightening the absurdity of every weird twist the story takes. Furie himself isn’t nearly so lively, but his laid-back presence is an intrinsic part of how this narrative unfolds; once he finally takes legal action to try to re-claim Pepe’s image, it’s clear how uncomfortable he is in that role, even realizing that acting sooner might have made some difference. There are a couple of diversions—particularly one about cryptocurrency and memes as collectibles—that don’t feel as connected to the central story, but it’s still an effective, entertaining cautionary tale about finding yourself forever associated with terrible people, because the ways they can spread their terribleness is evolving faster than we can keep up. (SR)

Timmy Failure: Mistakes Were Made *** [Kids]
The pieces, at first glance, don’t seem to fit together: an adaptation of cartoonist Stephan Pastis’ illustrated middle-grade book series; directed by Tom McCarthy, his first feature since the Oscar-winning Spotlight; a Disney+ feature, launching at Sundance. But it turns out to be a rare film with youth appeal that somehow takes their emotional lives seriously. Timmy Failure (Winslow Fegley) is an 11-year-old Portland 5th-grader trying to run a detective agency out of the home he shares with his single mom (Ophelia Lovibond), with his only partner a polar bear named Total who may or may not be real. There’s plenty of lighthearted comedy built into the story emphasizing Timmy’s active imagination, and Fegley turns in an unusual and welcome anti-adorable child actor performance, with his ragged haircut and perpetual scowl. But in finding a narrative through-line for a story that could otherwise be just episodic misadventures for the hapless but supremely confident Timmy, McCarthy and co-writer Pastis latch on to some real struggles for an eccentric kid living without his father. Timmy Failure never tips over into outright sentimentality, but there are some rougher edges to this story—and this character—than it might be natural to assume. (SR)

On the Record ***1/2 [Documentary Premieres]
Director Kirby Dick has previously explored the topic of sexual assault in the U.S. military (The Invisible War) and on college campuses (The Hunting Ground), but still finds disturbing and thought-provoking new issues surrounding the same harrowing subject. Co-directed by Dick’s frequent collaborator Amy Ziering, On the Record focuses on Drew Dixon, a former successful recording industry executive who, in 2017, went public with allegations of rape and sexual harassment by her one-time boss, Def Jam founder Russell Simmons, in addition to allegations of sexual misconduct by successful music producer L.A. Reid. The filmmakers allow Dixon to tell her story on camera, while also observing as she awaits the fallout from telling that story to the New York Times. And the film is unique in addressing the particular framework for this #MeToo story: a woman of color, accusing a powerful black man, stirring up issues of the way black women accusers—like Anita Hill—have been treated in the past, and a culture within African-Americans of not wanting to perpetuate stereotypes about sexually aggressive black men. While Dixon’s personal tale is harrowing, it becomes even more infuriating to think about the structures that keep women of color silent because, as one interview subject notes, “who we decide to listen to is totally predicated on who we decide has value.” (SR)