Relic, Dream Horse, Spaceship Earth, Once Upon a Time in Venezuela and more 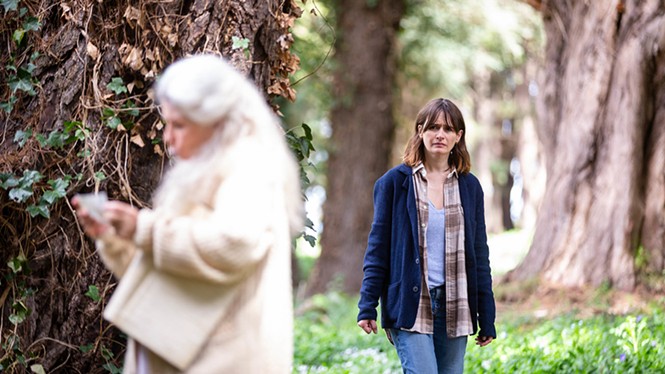 Relic *** [Midnight]
It was fascinating to realize not just that one of Sundance 2020’s recurring themes was dealing with the escalating dementia of an elder parent, but the range of approaches a filmmaker could take to that subject: in Dick Johnson is Dead as gallows humor, in The Father as psychological drama, and here as body horror. Natalie Erika James’ film casts Emily Mortimer as Kay, an Australian woman who goes to the family home with her 20-something daughter Sam (Bella Heathcote) when Kay’s mother, Edna (Robyn Nevin), goes missing. Edna ultimate reappears, but something is … different. James goes to the well of some of the most obvious genre tropes—things that literally go bump in the night, scary images that turn out to be bad dreams—and doesn’t entirely develop a mythology of place surrounding Edna’s house. But the final half hour kicks into high gear with a creepy sense of being trapped by family obligation, and a few truly effective disturbing images. Most surprisingly, it ends on a note of tenderness that pays off its extended metaphor about what happens when someone you love becomes someone you no longer recognize—and how to turn an instinctual fear and revulsion into something patient and kind. (Scott Renshaw)

Dream Horse **1/2 [Premieres]
Because there are certainly “types” of Sundance films, there are often times when you feel you’ve seen a certain story here before—but in this case, we literally have seen this story before. Louise Osmond’s wonderful 2015 documentary Dark Horse becomes this dramatized version about Jan Vokes (Toni Collette), a woman in a small Welsh village who convinces many of her fellow townsfolk to form a syndicate that will own a thoroughbred race horse they name Dream Alliance. Director Euros Lyn and writer Neil McKay do a solid enough job of creating the story’s sense of place, and how much their mutual investment in Dream Alliance gives them a sense of purpose they might otherwise lack. And while it’s hard to resist some of the more overtly crowd-pleasing components—whether from the “underdog sports movie” structure, or the working-class syndicate members breaking down the doors of the stuffy racing world—Dream Horse rarely does anything to move beyond the broadest strokes of the characters as salt-of-the-earth eccentrics. Once you know that there’s a version of this narrative that has more personality and a stronger sense of dramatic tension, this one feels fairly thin. (SR)

This Is Not a Burial, It’s a Resurrection *** [World Dramatic]
The title tells you right away this is a film with mythopoetic goals. An early shot, which slowly creeps through a dimly-lit bar until it sees a woodwind player / narrator upon whom the camera slowly zooms, tells you right away this is a director with such as Angelopoulos, Costa and Tarr in his repertoire. Eighty-year-old Mantoa (Mary Twala Mhlongo) learns of the death of her last surviving relative, and so prepares her own death. But Lesotho’s plans for a dam will flood their village and its ancestral gravesite, forcing an internal deportation. There’s a Christian priest who lost his wife, an apologetic chief, other deaths in the village (one involving a gun, which sounds shocking in this context), a sheep-shearing contest that gets bloody, a church bell made of spears, the history of the village’s names and more. Lemohang Jeremiah Mosese’s direction is exquisite, from the Academy frame and the popping colors and heavy indoor shadows, to the use of pans and music and narration and costumes and even mud. But it all gets to be a little … much. Call me churlish, but it’s as if Mosese wants to make a movie about everything on his mind and starts rambling, trying too hard. Still, over-ambition is a vice I’ll take six days a week and twice on Sunday. (VJM)

Spaceship Earth *1/2 [U.S Documentary]
In retrospect, I might’ve been too harsh on Welcome to Chechnya, saying it relied too much on the inherent drama of its subject. Here is a movie that’s sniffing its subjects’ jock so much I wanted to turn away in embarrassment. And the subject matter—eight people were “locked” for two years in an enclosed biosphere decades ago—just doesn’t have the urgent drama. It’s not until 45 minutes into Spaceship Earth that we get the slightest hint that any drama or any tension will develop. And even that—the fact that the eight people weren’t scientists, and were gathered by a quasi-cult figure—is quickly explained away, so-whatted and downplayed as The Media (the kinds of deflections I’d expect of a Steve Bannon). The film gets less bad as it continues, history forcing complexity into the story, but director Matt Wolf basically gathered as talking heads most of the surviving participants of a failed scientific project, including purported-cult-leader John Allen, and made an apologia. They present the project as a scientific road not taken for space exploration; CO2 scrubbers, oxygen machines and duffel bags can easily be picked up at the Asteroid Belt’s 7-11. Naturally everything gets destroyed because of the alt-right, and corrupted by the same consumer capitalism that was taking over San Francisco in 1969 (yes, really). (Victor J. Morton)

Once Upon a Time in Venezuela ***1/2 [World Documentary]
After the Sundance post-screening Q&A, director Anabel Rodriguez Rios reminded the departing audience to vote for her film for the audience award. “We’ll have the money for you when you get outside,” she joked. Everybody laughed, because we all had just seen a documentary with a scene of election-day vote-buying so brazen, Chicago ward bosses would’ve said “daaaaaaamn” from sheer awe. The film is more than the story of an election and the associated politics though—though it is that, and a very strange film for Sundance from that angle). Congo Mirador is an isolated fishing village on Lake Maracaibo, the center of Venezuela’s vast oil production, where people have for generations lived in homes on stilts. But it’s starting to rot and collapse as the muddy sediments turn the area into something closer to an encroaching swamp. One of the key scenes concerns the Hugo Chavez-loving mayor, who rules the town through glad-handing and political connections, going to the main provincial government in Maracaibo looking for help, warning that the village has lost half its population and … not getting it. What’s the use of ruling the roost, the film seems to say, when the roost is disappearing out from under you? (VJM)

Max Richter’s Sleep *** [Special Events]
The job of a documentary film director is uniquely challenging, and I offer as just one case in point the many ways Natalie Johns might have approached chronicling composer Max Richter’s epic work Sleep. The film primarily addresses one live performance of the piece Richter refers to as an “eight-hour lullaby” in a Los Angeles park, where attendees rest on cots drifting in and out of consciousness to the serene sound of piano, synthesizer and strings. Plenty of screen time is devoted to the performance itself, and to those in the audience—often simply showing them at rest, occasionally allowing them to speak about their perceptions of the work. Yet there’s also a large chunk about Richter himself and his partner/collaborator Yulia Mahr, and snippets of detail about the origins and goals of Sleep, and the physical and mental challenges of performing the marathon work live; it’s weirdly fascinating simply watching one of the cellists stretch her fingers during a moment of rest. Listening to artists talk about their work is always less interesting than the work itself, so the voiceover often feels like a distraction. But in just 98 minutes, Johns does evoke the sensation of allowing Sleep to wash over you, providing one of those experiences where art feels holy. (SR)