Of Dogs and Men | Buzz Blog

Of Dogs and Men

Bark is worse than legislators’ bite during the general session’s second week. 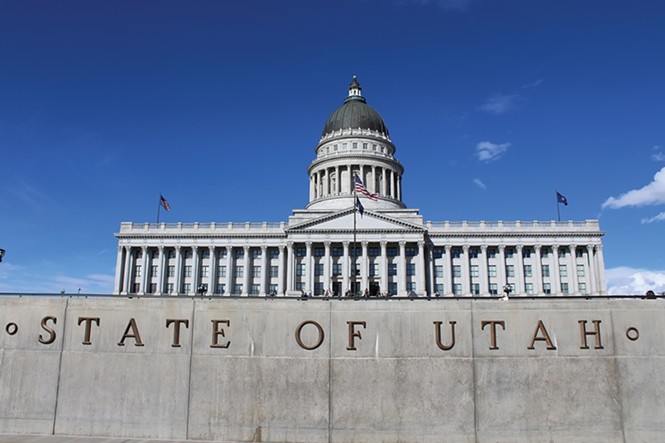 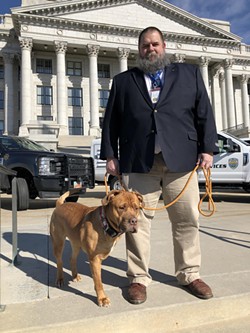 Rhett Nicks, director of Davis County Animal Care and Control, was hanging out on the south steps of the State Capitol on Tuesday, along with reps from six other local animal control divisions. It was Animal Welfare Day, so, of course, there were plenty of cute doggos, each one a very good boy/girl.


Like Phineas, a tan bull terrier with a missing front leg, who adorably hobbled about while Nicks spoke about improving Utah animal welfare laws.


This lege sesh, Nicks is most concerned about House Bill 202, which, if passed as it’s currently written, would increase the amount of time that police officers would be able to issue a citation for a barking dog—as long as two months.

First, your annoying neighbor would have to be given three warnings. After that, if they still can’t keep their pooch quiet, they would be cited.


“Our concern is the length of time,” Nicks told City Weekly. “The process of a first warning to a citation could be as long as two months, and who wants to wait two months listening to a barking dog drive you nuts? We don’t want to get to the point where citizens can’t resolve the problem for that long."

It’s just after noon on Tuesday, and there's a big coming-out party going on in the Capitol’s Gold Room, a gaudy space that’s what you would imagine a RuPaul fart looking like. The occasion is a gathering of the Clean Air Caucus, where some 20 reps each step to an open mic and chirp about what pro-enviro bill they’ll each be trying to pass over the next few weeks.


The emcee of the 20-minute gathering is Rep. Patrice Arent, D Millcreek, who introduces everyone. It’s very I-am-Spartacus mixed with a lot of Captain Obvious: “I think we all realize that electric vehicles don’t put out any emissions,” said Rep. A. Cory Maloy, R Lehi. Rep. Jeff Stenquist, R Draper, talks up his HB 176, which he said will offer incentives for people to get older fume-spewing cars off the road. He also said “our air today is cleaner than it’s ever been”—assuming he means after white folks got here.


The rest was a quick sound-bite-filled affair, with everyone spouting the basics of their bills whilst smiling for the TV cameras. Here’s Sen. Derek Kitchen, D Salt Lake City, who wants to encourage people to make investments in on-site battery storage! Here’s Sen. Luz Escamilla, D Salt Lake City, who wants to carve out some minimum air quality standards for the pending inland port! Here’s Sen. Lincoln Fillmore, R South Jordan, who wants to make clean energy sources more available to businesses and families! Here’s Rep. Andrew Stoddard, D Sandy, who has three kids—soon to be four!—and is so very, very concerned about their health as well as the rest of the residents of Utah! (And he would probably say that even if that wasn’t the most basic requirement of his job!)


Alas, there was no cray-cray talk, no cries of outrage over last week’s announcement that the Trump administration has finalized plans to let energy companies violently pillage southern Utah for its oil, gas and coal. And certainly no endorsement of the Green New Deal, because that’s Communism or whatever.


Well-intentions, all, but none of it will likely lure back the Outdoor Retailer show. Those much-missed peeps are gone for good. Thanks, Gary!