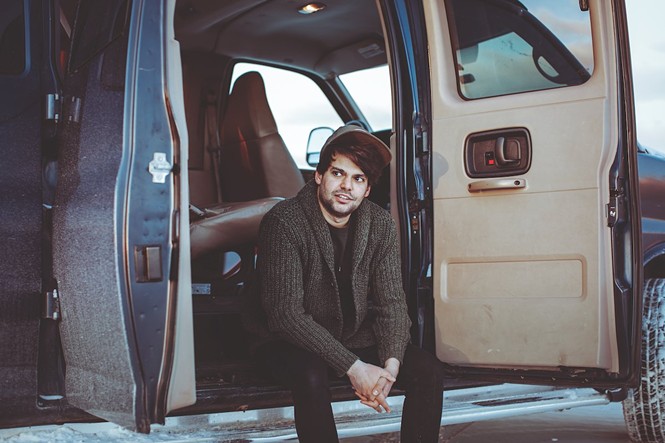 THURSDAY 3/5
Holy Pinto, Horrible Penny, MSKING, Jenny War @ Gold Blood Collective
There’s a perception that great music and the musicians who make it gravitate only towards coastal cities, yet cool artists find their way inland, too. That was the case for the man behind indie-pop act Holy Pinto, Aymen Saleh. Hailing originally from Canterbury, England, and growing up on pop-punk, Saleh eventually grew into a more emo-infused indie sound with albums like 2016’s Congratulations, and weathered the departure of his bandmate after the last album made together, 2019’s Adult. He responded to that transition by finding an unlikely home in Milwaukee, Wis. What was meant to be a temporary stay became permanent, as he found a home in their music community with all its traditional Midwestern welcome. Presumably using the van he initially bought in his first attempts to live in warmer southern climes, he’s now touring and visits Gold Blood Collective for a set with the low-key, sultry sounds of local act Horrible Penny. The initially-solo project of Spy Hop alumnus Allyson Katana, it’s lately been filled out by a full band, making the intimacy of the music a little bigger and a little brighter. MSKING and Jenny War also open. Gold Blood Collective, 25 Kensington Ave, Unit D, 7 p.m., $8, all ages, facebook.com/goldbloodcollective

THURSDAY 3/5
WAV Network Compilation Release @ Critical Beatdown
Salt Lake City is something of a breeding ground for local experimental musicians, and it’s become a thriving place for them to perform and collaborate. Local label Hel Audio is one home to these artists, and has been promoting electronic and experimental music around the city and beyond. The label’s most recent release, WAV Network, compiles 25 new submissions from local artists, the product of a November 2019 call for tracks inspired by the Hel Master Terminal, which “features text-based generators for musical sequences, track titles and art.” The resulting tracks showcase well-known and well-loved artists, including Ava Lux, Bobo, Adam Michael Terry, Angel Magic, UTA Trax and Marqueza. The album’s first track—“Mood Waves” by longtime-working SLC artist Mooninite—immediately sets the mood for an escapade into electronic euphoria. It’s followed up seamlessly by tracks like “Sync” by UTA Trax, and cascades into a collection of groovy, extremely listenable and well-produced tunes. While all 25 artists won’t be performing at the monthly Critical Beatdown night hosted by Good Grammar, live performers will include Terry, SoulChief, Octavewillis, St. J, Mooninite and Mr. Gizmo. Grab one of Good Grammar’s tasty craft cocktails and enjoy unique sounds cultivated by some truly talented SLC musicians. This won’t be your typical DJ set. Good Grammar, 69 Gallivan Ave, 9 p.m., free, 21+, goodgrammar.bar 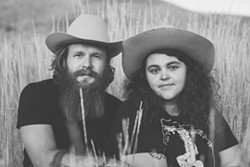 THURSDAY 3/5
Turtle Dovin’ @ Hog Wallow Pub
As of this writing, the forecast for March 5 reads as 60-freakin-degrees. That’s right, patio season is here, folks—or at least as long as Utah’s changeable spring weather holds. Patio season also means it’s time to head to the Hog Wallow Pub and enjoy their splendid outdoor atmosphere, preferably before heading inside to catch the stylings of Turtle Dovin’. Besides having maybe the sweetest name imaginable for a pair of musicians, it’s fitting, too. Doves mate for life, and the harmonies offered up by Turtle Dovin’ sound like perfect partners, as two accomplished musicians intertwine into one beautiful sound. Local musicians Michelle Moonshine and Andrew Wiscomb display their strong individual talents in this duo: Both generally deal in folk and Americana music when on their own, and Moonshine, for her part, seems to be constantly playing shows and polishing her craft. Her honeyed vocals join those warm ones of Wiscomb, a former Army man-turned-folk-aficionado with several awards under his belt. Together, they take on covers of forgotten or overlooked songs and burnish them with a “harmony-heavy” take. Fans of melodic folk music should come along to the show, but it would be a good bet for anyone looking for a good way to spend a pleasant early spring evening. Hog Wallow Pub, 3200 E. Big Cottonwood Road, No. 3501, Cottonwood Heights, 8:30 p.m., 21+, thehogwallow.com