Automotive ‘giant’ succumbed to complications from COVID-19 on Sunday. 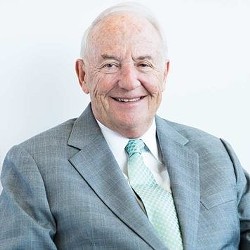 
The news was confirmed by his namesake automotive group.


“Robert was a giant in the community, a pioneer in the auto industry and the biggest cheerleader to every employee at Ken Garff Automotive,” spokesman Tim Brown said in a statement. “Robert loved his family immensely and will be missed by them as well as his employees and many friends.”


The statement went on to say Garff and wife Katherine Bagley tested positive for COVID-19 after driving back from Palm springs, Calif. They “immediately” self-quarantined and the automotive magnate’s health took a turn for the worse, while Bagley continued to recover at home.


At the time of his death, Garff’s empire—which was founded by his father Ken in 1932—included 54 car dealerships across Utah, California, Nevada, Texas, Iowa and Indiana.


Back in 2015, Garff recalled to City Weekly the thrill of selling his first car.


During his life, the 78-year-old received many accolades. Notable honors include Dealer of the Year from the American International Automobile Association and the Distinguished Utahn Award from the Salt Lake Chapter of the BYU Management Society.


He was also a staunch supporter of his alma mater, the University of Utah, where he funded a new building for the David Eccles School of Business, as well as the Ken Garff Performance Zone at Rice-Eccles Stadium, set to open next year. Garff served as Speaker of the House of Representatives from 1985-1987 and was Chairman of the Board of Trustees of the Salt Lake Organizing Committee for the 2002 Olympic Winter Games.


“It breaks my heart,” Sen. Mitt Romney, who was selected by Garff to head the games’ Organizing Committee said in a statement. “Bob’s contributions to our state, to our economy, and to our church will be heralded by many. But for me, it was his sound and principled leadership as the Chairman of the Olympic Winter Games of 2002 that is most compelling. The scandal that surrounded the Games could have overwhelmed our collective commitment, but Bob’s genuine goodness, clear-eyed optimism, and can-do management experience helped to re-ignite our confidence and community spirit. The Games were arguably the best ever, in large measure thanks to the character and care of Bob Garff.”


“We have lost a really great man. Bob Garff touched countless lives and gave so much service to our state, and its people,” Herbert shared on Twitter. “He leaves a hole in our heart and in the community.”


“Utah has lost not only a tremendous leader—but a community friend and someone who was always looking for ways to serve,” Cox said. “When the final history of Utah is written, Bob Garff deserves his own chapter.”


Asked by City Weekly in 2015 to share his personal keys to success, Garff’s answer was swift: “Education is No. 1. No. 2, if you have the will, your mind will do anything—you must have a passion. No. 3, never compromise personal integrity— honesty is the best policy. As life goes on, you must give back to the community that raised you.”


Garff is survived by his wife, Katharine, five children and 21 grandchildren.