Arkansas, The Infiltrators, Deerskin, The Wretched 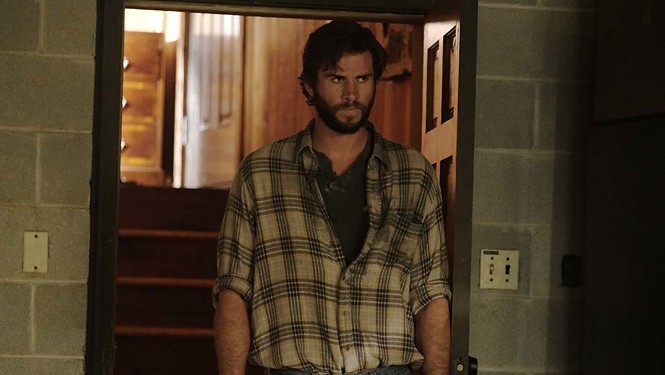 Arkansas ** [on demand May 5]
Remember the mid-to-late 1990s, when indie cinema was overflowing with Tarantino-copycat crime thrillers? It’s been long enough that one could almost be nostalgic for them. Actor Clark Duke, who co-wrote this feature directing debut, also co-stars as Swin, who partners with a guy named Kyle (Liam Hemsworth) to become drug-runners for an operation in the Southern states. This is the kind of movie that fills its cast with familiar names—Vince Vaughn, John Malkovich, Vivica A. Fox—a bit of punchy dialogue, bursts of violence and a finale that theoretically should pull it all together with some emotional weight. But it’s hard not to focus on what’s familiar about its QT-worshipping structure, which gives us named chapters, achronological episodes, and even a guy being tortured while tied to a chair. Granted, it adds some energy to the proceedings that the tied-up guy in question is Malkovich, who manages to sell a line like “I’ve never been tortured before.” Those are the snippets you’ve got to latch on to when the story abruptly tries to turn Hemsworth into the protagonist near the end. Or maybe it’s Vaughn’s character this is all about. It’s easier to tell who this movie is trying to be like than what it’s trying to be about. (R)

Deerskin *** [SLFSatHome.org May 1]
A movie about a guy whose new jacket drives him insane makes a lot more sense once you realize it’s by the same guy who made a movie about a homicidal, sentient car tire. Writer/director Quentin Depieux (Rubber) tells the story of Georges (The Artist’s Jean Dujardin), who leaves his life behind to become obsessed with his new deerskin jacket, to the point of having conversations with it, and making a movie—with bartender/aspiring film editor Denise (Adèle Haenel)—about his quest for a world where nobody else should be allowed to wear jackets, of any kind, ever. Depieux offers a few hints at the woes that send Georges off into his crazed quest, teasing the narrative as something akin to an allegory about a midlife crisis gone haywire. But just like Denise’s own efforts to find logic in the footage Georges provides her, it’s not necessarily there. This is a world with little connection to reality—dead bodies pile up in a small town with no apparent investigation—and a lot of episodic weirdness packed into its 77 minutes. Just groove to the madness of a universe where Denise notes one of her first attempts at film editing as “I put Pulp Fiction in order.” (NR)

The Infiltrators ** [at ParkCityFilm.org May 1]
Long-time readers are no doubt familiar with my frequent gripes about film biopics that “show the real person at the end.” Well, adjust how much your mileage may vary, because this is practically the ultimate form of that trope. Directors Christina Ibarra and Alex Rivera opt for a hybrid of documentary and dramatization about how activists from the National Immigrant Youth Alliance—particularly Marco Saavedra and Vidi Martinez—allowed themselves to be detained at a Broward County, Fla. ICE facility in 2012 in order to help get detainees’ stories out. Because Saavedra and Martinez obviously couldn’t film their exploits while incarcerated, that part of the story is rendered in re-creations starring actors Mayner Alvarado and Chelsea Rendon, while the activities of National Immigrant Youth Alliance on the outside takes the form of documentary footage. And the mix is clunky at best, since the dramatized footage of lock-up life—involving people who never know if or when they might be deported—never reaches a level of intensity that matches what we see happening in real life. I don’t envy filmmakers trying to figure out how to tell this specific story visually, but this way just doesn’t work. (NR)

The Wretched **1/2 [on demand May 1]
There’s a creepy-fun throwback quality to this horror yarn from writer/director brothers Brett and Drew Pierce, if you spend exactly zero time trying to understand its unnecessarily convoluted and inconsistent mythology. It follows 17-year-old Ben (John-Paul Howard), a kid of separated parents who travels to spend the summer with his dad (Jamison Jones) on the rural Michigan shores of Lake Michigan. There he being to believe that the house next door to his dad’s is the site of something wicked taking place, perhaps involving a witch who occupies other human bodies. The Pierces don’t shy away from old-school ickyness or jump scares, nor are they timid about putting children in real not-everyone-survives peril. Throw in some teen appeal from a tentative romance, plus a Rear Window vibe, and you’ve got the parts for something with a little genre oomph. It’s too bad that virtually nothing about the plot makes a lick of sense, from the creature’s modus operandi to the third act’s thoroughly dopey surprise reveal. Pick your preferred terminology for such a story—popcorn cinema, refrigerator logic, etc.—and decide how much dumb you'll tolerate when sprinkled over your scary movies. (NR)