How to Build a Girl, Spaceship Earth, Clementine and more 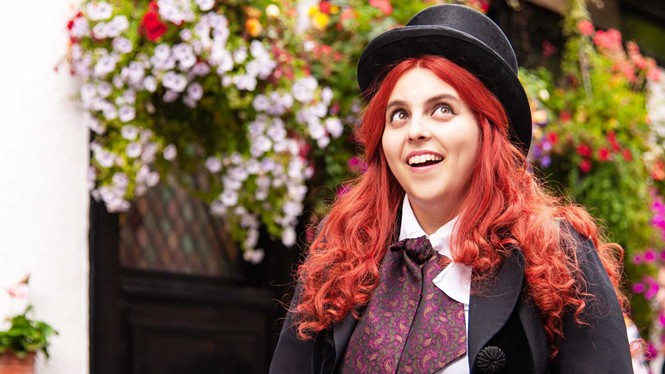 Capital in the Twenty-First Century **
The trick behind “lecture documentaries” is not to make them feel like lecture documentaries, but director Justin Pemberton barely even tries. His film is literally a history of capital spanning the past three centuries—from the age of monarchy and colonialism through the World Wars and into the present—as a parade of economists, writers and academics talk about how wealth has been either consolidated or dispersed at various times, depending upon political and sociological factors. If that sounds like a snooze, that’s only because it generally is. Like a teacher trying to spice up a subject for bored students, Pemberton throws in showing us a movie every now and then—The Grapes of Wrath to illustrate the Great Depression, Wall Street to convey the “greed is good” 1980s, etc.—but for more than an hour, he’s simply trudging through the decades saying the same thing in slightly different ways: life is better for more people when the majority of wealth isn’t in the hands of a few. You can be firmly on board with that point, and still wish there were more interesting diversions—like research into how feeling wealthy turns you into an entitled asshole—rather than 100 minutes that could be distilled into “maybe higher progressive taxes and less inherited wealth is a good idea.” Streaming May 8 via Park City Film Virtual Cinema. (NR)

Clementine ***
“Coming of age” might not be the first descriptor that comes to mind for a story focusing on a woman in her 20s, but the way writer/director Lara Jean Gallagher incorporates that idea into her psychological drama is a lot of what makes it work. Otmara Merrero plays Karen, a 20-something woman unmoored by the breakup of her relationship with an older professional artist. Karen travels from Los Angeles to break into her ex’s Oregon lake house, where she meets Lana (Sydney Sweeney), an enigmatic teenager who seems both older and younger than her years. With the exception of a caretaker for the house (Will Brittain) who appears halfway through, this is largely a two-hander, and both lead performances are strong even as the characters keep things hidden. And Gallagher directs with a slick confidence that somehow manages to evoke something portentous from a stream of roadside pee. Mostly, it’s a strong story about the point when you realize you’ve evolved from needing a mentor for life lessons to potentially being that mentor, and how easy it is to take advantage of that relationship. It’s a solid minimalist exploration of what it means to become “old enough to know better.” Streaming May 8 via Utah Film Center Virtual Cinema. (NR)

The Dog Doc ***
At a time when we're all emotionally fragile, it's hard to know whether this movie is particularly appealing because it features a lot of good doggies, or particularly upsetting because those good doggies are facing medical crises. Ostensibly, the subject here isn't those companion animals, but the doctor trying to help them: Dr. Marty Goldstein, a New York-based veterinarian who combines conventional methods with more controversial treatments like herbal supplements, cryogenically freezing cancerous tumors and offering intravenous vitamin C. Director Cindy Meehl plays fair enough with Dr. Goldstein that the film doesn't present him as a miracle-worker; not all of his patients have positive outcomes, and those who might be upset by animals in trouble should consider their viewing carefully. But it's still an interesting profile of the doctor and his staff, whose commitment to their patients includes a lot of treatments scoffed at by the medical establishment. The Dog Doc certainly serves as an endorsement of a holistic approach to veterinary care, and while it doesn't challenge Dr. Goldstein's methods, it sure gives an emotional punch to anecdotal evidence. Streaming May 8 via SLFSatHome. (NR)

How to Build a Girl **
Beanie Feldstein, at 26 years old, has built her acting career on playing teenagers—and maybe it’s about time she stopped. In director Coky Giedroyc’s adaptation of Caitlin Moran’s young-adult novel, Feldstein plays Johanna Morrigan, a 16-year-old aspiring writer from a struggling family in the English Midlands circa 1990. When she lands a gig writing for a hip music magazine, the nerdy Johanna reinvents herself as brash Dolly Wilde, and immerses herself in a debauched world. At times the narrative plays as a distaff spin on Almost Famous, with Johanna occasionally crossing the line in becoming too personally involved with the artists she’s covering (like a popular rock star played by Alfie Allen). But Gieroyc makes the whole thing too precious by half, with everything from the talking pictures of Johanna’s idols on her walls to Johanna’s never-was would-be musician dad (Paddy Considine) coming off forced. Mostly, there’s the problem of Feldstein’s casting as she manages to be unconvincing as a shy teenager, as a dissolute teenager, or as a British teenager. When the entire story is built around sympathizing with Johanna’s fumbling towards figuring out who she wants to be, it’s tough to connect with a performance that never captures that youthful uncertainty. Streaming May 8 on demand. (R)

Spaceship Earth **1/2
Fawning over a fascinating subject is a sure way for a documentary to end up frustratingly incomplete, and that’s basically what happens with director Matt Wolf’s account of the famed/infamous 1990s Biosphere 2 project, in which eight researchers were sealed inside a facility intended to be a completely self-sufficient world. Wolf tracks the project from its origins in a hippie commune that started out as a kind of avant-garde theater collective, and the film is at its most interesting when suggesting how much the renown of this project was a feat of public-relations showmanship rather than science. But in his heart, Wolf clearly wants to celebrate these people as idealistic rebels fighting against The Man—a young Steve Bannon actually becomes one of the villains—which means he’s not really willing to interrogate the project’s cult-like spiritual father, John Allen, about this story’s more controversial elements, despite having the opportunity to get him on camera. There’s a ton of great footage from the two-year experiment, but the actual personalities of the “bionauts” remain mostly two-dimensional, so that they can become generically admirable pioneers in the face of corporate villainy. Streaming May 8 via Utah Film Center Virtual Cinema. (NR)

Straight Up ***
See feature review. Streaming May 8 via SLFSatHome. (NR)