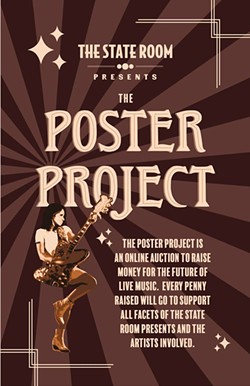 Like live music shows themselves—where the simple act of ambling into a venue, paying for a beer or two and standing around with friends used to seem mundane—the simple fact of a good show poster also seems dear and nostalgic right now. The State Room, in their attempts to keep some kind cash flow coming to their business, has gotten creative with an auction of old show posters, dubbed The Poster Project. Kicking off today, May 11—like, as you’re reading this— the project will run first through today, and then officially once more on May 20 and and 27, with more dates possibly announced.

There are dozens of old show posters posted up on their new site, where all posters start at the low bid of $15, with many—signed posters by Ani DiFranco and Rusted Roots, for example—already having soared well over $100. As stated on their site, as the project goes on they hope to offer more memorabilia and merch for fans and collectors to look forward to. Besides already seeming like a very lucrative project for The State Room, it also just feels like a fun fundraiser that could happen during normal days, and that’s valuable on its own. Keep up with The Poster Project on Facebook, and shop til you drop over at tsrposterproject.com.