The Go-Go's, Summerland, I Used to Go Here and more 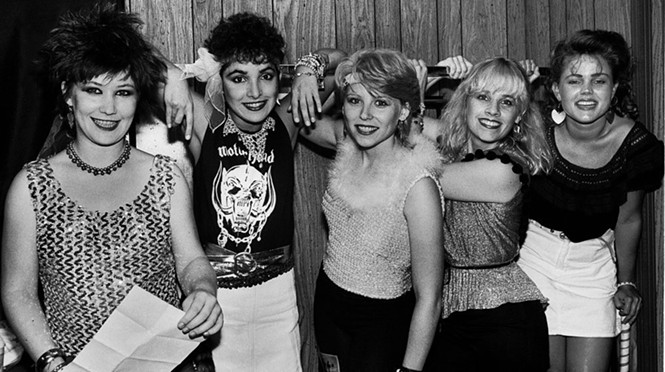 The Cuban **
There’s what a movie is about in the “here’s the one-sentence synopsis” sense, and there’s what a movie is about in a thematic sense—and honestly, I have no idea what those two have to do with one another here. As for the former, it’s the story of Mina Ayoub (Ana Golja), a 19-year-old Afghan-born pre-med student at a Canadian university, whose job as an orderly at a senior care facility introduces her to Luis Garcia (Louis Gossett, Jr.), a once-celebrated Cuban guitarist suffering from vascular dementia and early Alzheimer’s. Mina begins drawing him out of his catatonia by playing traditional Cuban music and cooking him traditional Cuban food, which in theory is related to the idea that Mina wants to be a singer rather than a doctor (I guess?), which would create conflict with Mina’s aunt (Shohreh Aghdashloo). The traditional family/modern society conflicts make for tedious stuff, especially when there’s fascinating material in the back-story for Mina’s aunt. And despite the attempt to make Lauren Holly’s head nurse a fussy villain, Mina’ profound connection with Luis feels thinly supported at best, leaving us with a 19-year-old’s irresponsible self-appointed stewardship over a dying man. Available July 31 via SLFSatHome.org. (NR)

The Go-Go’s ***
I thought I would have seen this all before on a VH1 Behind the Music episode, but director Allison Ellwood takes advantage of her access to the band to deliver something with more energy and wisdom. The archival material predictably takes us back to the late-’70s Los Angeles punk scene, and the band's initial incarnation of Belinda Carlisle, Jane Wiedlin, Margot Olavarria and Elissa Bello, before a shift toward pop songcraft with the addition of guitarist Charlotte Caffey changed the band’s trajectory towards stardom, once Kathy Valentine and Gina Schock replaced Olavarria and Bello. The participation of Olavarria, Bello and original band manager Ginger Canzoneri allows for a full picture of the path that led toward MTV celebrity and the first-ever number 1 record by an all-female band playing and writing their own songs, and the members open up thoughtfully about substance abuse issues, regrettable decisions and mental health struggles. But even when The Go-Go’s starts to feel familiar in its rock-doc rhythms, it’s just enjoyable spending time with these women opening up with nearly 40 years of hindsight and experience—particularly Schock and Wiedlin, whose honesty is frequently hilarious. It’s the kind of movie that makes you think that, as cool as it might have been to hang out with these five women in their chart-topping heyday, they might be even cooler to hang out with now. Available July 31 via Showtime. (NR)

Gordon Lightfoot: If You Could Read My Mind **1/2
For a few minutes at the outset of Martha Kehoe and Joan Tosoni’s documentary, I felt a spark of possibility: There was legendary Canadian singer/songwriter Gordon Lightfoot, watching footage of himself from 50 years earlier, lamenting how his then-wife must have felt about his infidelity-infused song “For Lovin’ Me.” Unfortunately, instead of leaning into their access to the then-79-year-old Lightfoot, they subsequently turn the rest of the 90 minutes into a standard-issue parade of chronological history and worshipful talking heads attesting to his status as Canadian national treasure. Sure, there’s interesting material strewn throughout, from the interplay between the Toronto and New York folk revival scenes of the 1960s, to the alcoholism that nearly torpedoed Lightfoot’s life in the 1970s. And the film certainly provides a keen sense for his meticulous nature as an artist, which makes the anecdote about the first-ever-take recording “The Wreck of the Edmund Fitzgerald” becoming a smash hit worth inclusion. It simply feels like a missed opportunity not to dig deeper with the man himself, leaving it to fans and colleagues to tell his life story—and as is true of so many other similar “great artist” documentaries, there are only so many different ways to say “boy, he was amazing.” Available July 31 via SLFSatHome.org. (NR)

I Used to Go Here ***
That tricky psychological space between “potential” and “this is who I am” gets a gently comedic treatment in writer/director Kris Rey’s story of Kate Conklin (Gillian Jacobs), a 30-something Chicago woman whose debut novel has emerged to lukewarm response, just as she’s dealing with a recent breakup with her fiancé. She responds enthusiastically to an invitation by a former professor (Jemaine Clement) to give a reading at her alma mater, where Kate finds herself infatuated with memories of her college days. Rey draws a fun cast of supporting characters around Kate, particularly the students now occupying her one-time residence and her indefatigably cheery driver (Rammel Chan). The strong center, though, is Jacobs’ performance as Kate, who captures the nostalgic appeal of returning to a time before you started making compromises, and comparing where you are in life to your peers. Sure, in some ways it’s basically a mid-life crisis narrative, but Rey injects her humor with compassion for Kate’s journey towards recognizing that checking off items like “get married” or “publish a book” isn’t as important as feeling proud about how you do those things. Available July 31 at Megaplex Theatres; Aug. 7 via VOD. (NR)

Rebuilding Paradise ***1/2
On Nov. 8, 2018, the catastrophic “Camp Fire” in Northern California killed 85 people and virtually eradicated the town of Paradise; director Ron Howard’s emotionally devastating documentary chronicles not just the horrific disaster itself, but a year in the life of those who survived, trying to put their lives and their town back together. The opening 10 minutes are almost unbearably tense, using video taken by residents as they flee the inferno, many of them wondering out loud if they’re about to die. But it’s just as engrossing once the immediate threat is over, and Paradise residents cope with every possible kind of fallout from the fire: toxic runoff that renders the water undrinkable; FEMA regulations that force people to move back off of land they just returned to; families broken up by the stress of the events. Howard doesn’t shy away from emphasizing the responsibility of Pacific Gas & Electric’s negligence in maintaining equipment for causing the fire, but he also places this event in the context of other factors, including forest management practices and lack of action on climate change. As much as the individual personal stories here might bring you to tears, the coda suggests a world in which millions more like it are becoming an everyday occurrence. Available July 31 via VOD, ParkCityFilm.org and at Megaplex Theatres. (NR)

Summerland **1/2
First-time feature writer/director Jessica Swale sprinkles some familiar elements together with a bit of off-beat energy in a way that too often feels schematic rather than genuinely emotional. In WWII “blitz”-era England, solitary writer Alice Lamb (Gemma Arterton) finds herself unexpectedly called upon to shelter Frank (Lucas Bond), one of the many children sent from London to remote towns for their safety. For a while, Summerland falls squarely into the familiar genre of “surly misanthrope softens up when forced to care for a child,” with Arterton at times seeming like an awkward fit for a “get off of my lawn” character. The narrative expands somewhat when flashbacks reveal Alice’s romantic relationship with a woman (Gugu Mbatha-Raw) some 15 years earlier, and there are moments of real poignancy during the rare occasions when Alice feels accepted for who she is. The structure is a bit clunky, however—the main story is itself a flashback nested inside a 1975-set framing sequence—and a subplot involving Frank’s friendship with a classmate offers more interesting potential than the main story-line. Swale finds a satisfying end-point for her story, even if she needs to drive us over a bumpy, pothole-filled road in order to get there. Available July 31 via VOD and at Megaplex Theatres. (PG)