The Glorias, Save Yourselves!, Dick Johnson Is Dead, Possessor and more

The Boys in the Band **1/2
Mart Crowley’s 1968 play The Boys in the Band is an odd sort of time capsule to attempt to bring into the 21st century; it’s hard for the pre-Stonewall rage and self-loathing it evoked to play as more than melodrama. This film version with the cast of the 50th-anniversary stage revival—itself on the 50th anniversary of William Friedkin’s original film version—places several gay friends in the New York apartment of Michael (Jim Parsons), gathering for the birthday of Harold (Zachary Quinto). But a fly gets thrown into the ointment with the arrival of Michael’s straight college friend, Alan (Brian Hutchison), turning the party into considerably more angsty affair. Director Joe Mantello attempts to open the single-setting action up a bit, employing snippets of flashback and an extended epilogue, though the claustrophobia of the text really should be seen as a feature rather than a bug. Mostly, it’s hard to connect with the emotions fueling the characters’ unhappiness—from shame to jealousy to regret—when the performances are pitched so broadly, particularly Quinto in what appears to be an attempt at an impression of Leonard Frey’s original Harold. As authentic as this might be to the experience of its time, turning it into a period piece somehow makes it feel less vital. Available Sept. 30 via Netflix. (NR)

A Call to Spy **
Sarah Megan Thomas was clearly passionate enough about the real-life story of World War II-era female spies to write a screenplay about it—and perhaps too passionate to realize that perhaps her participation should have ended there. Because Thomas also plays Virginia Hall, an employee at the American embassy in London circa 1941 who trains under Vera Atkins (Stana Katic), a Romanian Jewish immigrant working for British intelligence, to go undercover in occupied France to support the Resistance, along with radio operator Noor Inayat Khan (Radhika Apte). The narrative provides plenty of narrow escapes and ticking-clock-until-possible-discovery scenarios, with director Lydia Dean Pilcher doing her utmost to optimize the tension. The problem is that the human side—particularly the determination of Hall, handicapped by an artificial leg, to be taken seriously enough to make a difference—gets flattened out thanks to Thomas’s performance in the lead role, which feels broad when it should be restrained, and opaque when it should be open. As unique as it is to build an espionage thriller around the fact that the protagonists failed as often as they succeeded, it’s still hard for A Call to Spy to resonate when a key personal connection is lacking. Available Oct. 2 in theaters and VOD. (PG-13)

The Glorias **1/2
In her second effort at a “great woman” biopic, following 2002’s Frida, director Julie Taymor attempts to shake up the formula, but only at odd intervals. Adapting a memoir by feminist icon Gloria Steinem, the story casts four different actors to play Steinem at various points in her life—including Alicia Vikander as a young adult, and Julianne Moore in her more mature public-figure days—attempting to capture the impact of her peripatetic childhood and the influence of her vagabond father (Timothy Hutton) and mentally ill mother (Enid Graham). The Glorias inevitably covers some of the same ground as the recent Mrs. America miniseries, losing some depth in the process, and there’s definitely a “greatest hits” approach to some of the ground covered. Then, periodically, it’s as though Taymor will remember that she’s a crazy visual stylist, and aside from a through-line device of having her multiple Glorias interact with one another on a bus, she’ll throw in a crazy fantasy sequence based on a talk-show appearance, or animation, or whatever. It’s fun when it works, but would have worked a lot better if not pasted on top of a conventional structure that still finds time for how Gloria bought her first pair of oversized tinted glasses, like it’s a superhero origin story. Available Sept. 30 via Amazon Prime and VOD. (R)

The Keeper ***
When a real-life story is compelling enough, sometimes all you need to do is get out of the way and let it do its thing. In this case, it’s the real-life story of Bert Trautmann (David Kross), a German POW in 1945 England whose skills as a soccer goalkeeper give him an opportunity to play for the local club, and eventually on to a storied professional career. The expected conflicts ensue as the post-war Brits find it hard to accept a German in their midst, and Trautmann himself struggles to put guilt over his wartime behavior behind him, with an added star-crossed lovers subplot as Bert falls for Margaret (Freya Mavor), the daughter of his team manager. It’s an uncomplicated narrative about forgiveness—both of the other and of ourselves—with solid performances keeping the tale grounded as more than a mere “underdog sports/fish-out-of-water” drama. The film’s second half is considerably weaker than its first, racing through several years on the way to the biggest triumphs of Trautmann’s professional life and tragedies of his personal life. But it works in its no-frills approach that still feels more like a human story than a filmed Wikipedia entry. Available Oct. 2 via SLFSatHome.org. (NR)

Once Upon a River **1/2
In theory, it’s a solid idea to put a thoroughly competent teen girl at the center of a survivalist coming-of-age narrative—except that this one rarely seems to understand how to optimize its strengths. Writer/director Haroula Rose adapts Bonnie Jo Campbell’s novel about Margo (Kenadi DelaCerna), a half-Native American teenager circa 1977 who flees into the wilds of rural Michigan after the killing of her father, in an attempt to find her mother (Lindsay Pulsipher), who had left the family a year earlier. The set-up involves some uncomfortable elements—including incest and substance abuse in this isolated location—which could have made for a uniquely compelling setting. But Rose never fully brings that setting to life, nor does she allow Margo to emerge in all her potential power. Once Upon a River finds its strongest material in a friendship between Margo and a lonely, terminally-ill man (John Ashton), part of Margo’s episodic journey that also includes a brief affair. All the pieces should be in place for something steeped in a sense of place, except that people keep talking about how terrible things are, rather than viewers getting a chance to feel it. Available Oct. 2 via SLFSatHome.org. (NR)

Possessor ***
Body horror would appear to be a Cronenberg family business, as David’s son Brandon offers a slick and creepy little sci-fi thriller that only disappoints by missing out on a subtext that’s sitting right there. The premise involves assassination by proxy, as a hired killer named Tasya Vos (Andrea Riseborough) who employs a brain-implant technology to take over the consciousness of other people and have them do the dirty work. But as Tasya begins her latest mission—inhabiting Colin, (Christopher Abbott) the boyfriend of the daughter of a targeted tech billionaire (Sean Bean)—her ability to control Colin starts slipping. True to the tantalizing Possessor Uncut title with which it’s being marketed, Cronenberg’s movie is graphic and bloody, as Tasya seems to favor making her killings as messy as possible. The story also teases a metaphor involving data mining, as Colin’s job involves a violation of privacy he himself experiences. That notion, unfortunately, disappears almost as soon as it’s raised, leaving something that’s less about "identity theft" than it is a simple visceral experience, energized by Cronenberg’s terrifically stylized portrayal of the space where Tasya and Colin’s minds intersect. Any potential emotional component fails to click, but it’s clear there’s another Cronenberg who can deliver the shivers. Available Oct. 2 in theaters. (NR) 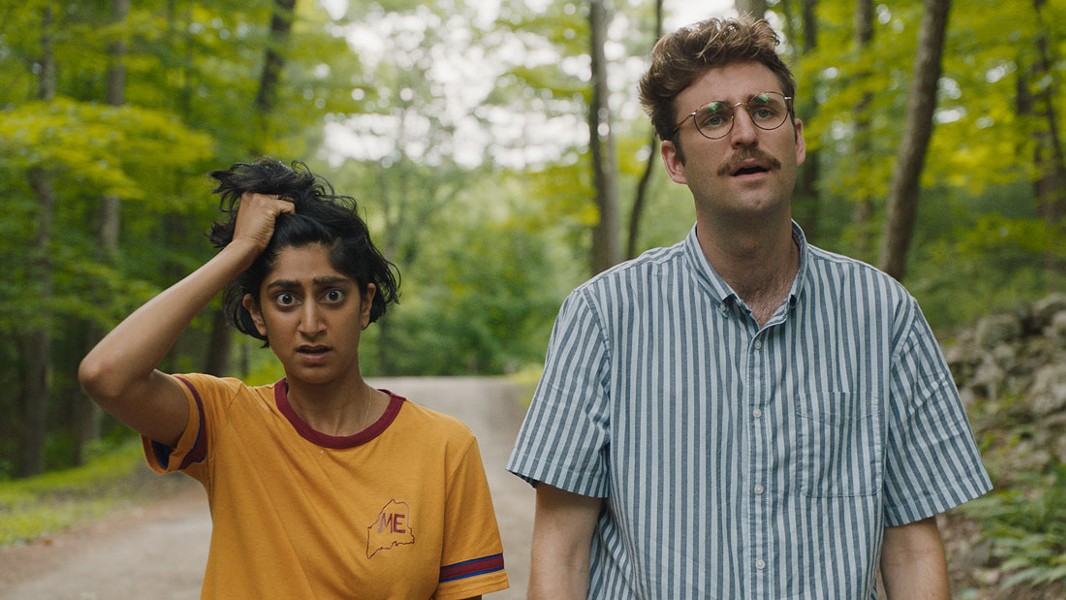 Save Yourselves! ***
It takes a fair amount of inspired goofiness to make up for a weirdly unsatisfying ending, so it’s fortunate that writer/directors Alex Huston Fischer and Eleanor Wilson come hard with it. They tell the story of Jack (John Reynolds) and Su (Sunita Mani), a Brooklyn couple who look to break from their Extremely Online lifestyle with a week unplugged at an upstate cabin—which happens to coincide with an alien invasion of earth. The first half gets a lot of mileage out of Jack and Su’s addiction to modern life, and a relationship stagnated by time spent physically in the same space but connected to their devices. Once they become aware of the global crisis in progress, the dynamic shifts to focus on how ill-equipped they are to survive something as simple as driving a manual transmission car, and their encounters with the fluffy, round (but deadly) alien invaders. It all seems meant to serve a moral about finding purpose once you disconnect, and Reynolds and Mani are both engaging beyond becoming hipster stereotypes. Then comes that ending, which doesn’t feel like a resolution that serves that moral at all—a “funny-strange” that’s kind of a shame after a solid dose of “funny-ha-ha.” Available Oct. 2 in theaters; Oct. 8 via VOD. (R)

Tar *1/2
I don’t ask much of dopey exploitation horror, but somewhere along the line it has to be at least internally consistent. There’s just no rhyme or reason to anything that goes on in this story of a group of people—including father-and-son repair shop owners Barry (Timothy Bottoms) and Zach (co-writer/director Aaron Wolf)—trapped in a soon-to-be-demolished Los Angeles building with a creature that has emerged from the La Brea Tar Pits. What is the nature of this creature, you might ask? Well, despite the presence of an exposition-dumping crazy guy (Graham Greene), its nature is just too nebulous to get a handle on what it can do to you. Is it made of tar? Does it control tar? If it can easily rip someone’s face off with its bare hands, why does it also carry some sort of tusk as a weapon? There’s also some deeply stupid back story that suggests Barry has a family history with the creature, and therefore has voluntarily remained in building, with his son, when he knows a murderous monster hangs out nearby. A little gratuitous cleavage and broad comic relief lighten the mood a little, but between the tension-defusing editing and the poorly-defined threat, the scariest thing going on here is a waste of time. Available Oct. 2 in theaters. (NR)