The Marksman, Locked Down, MLK/FBI, Outside the Wire and more 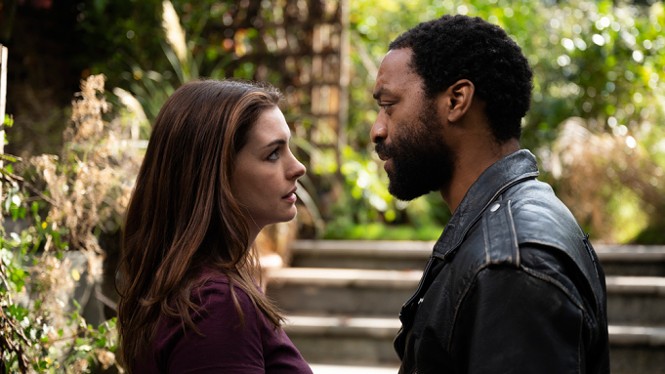 Locked Down **1/2
I may be the only person in the world who thinks Doug Liman’s Mr. & Mrs. Smith is an unacknowledged masterpiece, but nevertheless I perked up when I started to suspect that the director was exploring similar territory. The screenplay by Steven Knight (Dirty Pretty Things) is set during the early days of the coronavirus lockdown in London in spring 2020, with longtime partners Linda (Anne Hathaway) and Paxton (Chiwetel Ejiofor) stuck together just as their relationship is unraveling. Ultimately, a potential heist scenario evolves, and it’s here that the Mr. & Mrs. Smith similarities manifest themselves—in a tale of people who might be able to fall back in love through crime. That “ultimately,” unfortunately, takes far too long to develop in the two-hour run time, leaving a lot of space to be filled with what feels like a laundry list of pandemic touchstones: awkward Zoom meetings; toilet-paper hoarding; late-night cheers for health-care workers. Hathaway and Ejiofor have a solid chemistry, and Knight’s screenplay does find its strongest moments in people re-evaluating their lives in the midst of a crisis. Yet as much as Locked Down is determined to be about its particular historical moment, there’s already evidence that this kind of a story can work just fine—and probably better—without it. Available Jan. 14 via HBO Max. (R)

The Marksman **
Veteran producer Robert Lorenz’s only previous directing credit was with his longtime collaborator Clint Eastwood, 2012’s Trouble With the Curve, so it’s kind of fitting to see him move on to Liam Neeson as the actor continues the phase of his career as taciturn Eastwood-esque action hero. Here Neeson plays Jim Hanson, a widowed Marine veteran working a small cattle ranch on the Arizona border, where he encounters a boy named Carlos (Jacob Perez) and his mother fleeing a Mexican drug cartel. Hanson subsequently takes it upon himself to shepherd Carlos to relatives in Chicago, making this an earthbound variation on The Mandalorian’s “tough character softens while caring for a kid” narrative. And for a little while, it seems like one with a bit of a political conscience built around Hanson’s possible evolution from flag-flying patriot who narcs on illegal immigrants to someone threatened with insolvency because of his dead wife’s medical bills. That notion vanishes quickly, however, leaving a blandly effective road-trip relationship and a few grim encounters with the cartel villain (Juan Pablo Raba) that weirdly turns into a “personal responsibility” lecture. Neeson has grown expert enough at this shtick that it’s possible to enjoy part of this journey, even when it becomes as much about Eastwood politics as Eastwood persona. Available Jan. 15 in theaters. (R)

MLK/FBI ***1/2
The antagonism towards Dr. Martin Luther King, Jr. within the FBI might be fairly common knowledge, but director Sam Pollard’s documentary takes several compelling and complex turns as he digs into that story. Built on newly-unclassified government documents, the film tracks the evolution of J. Edgar Hoover’s campaign against King from possibly legitimate concerns about his association with one-time communists, to surveillance built on attempting to discredit King by finding evidence of his extramarital affairs. Pollard wisely focuses on a sensational range of archival material, including rarely-seen interviews with King and scenes from contemporary films and TV shows that contributed to the glorification of the FBI. The latter in particular contributes to a history that clarifies the FBI not as some rogue entity overstepping its power, but as a fundamental part of the American power structure; the title here might just as fairly be MLK/USA. And there’s also the framework of how much it should matter to us now to look at this proof of King’s faults, or more extreme unsubstantiated allegations. The historians and King contemporaries interviewed here paint a full portrait of King as hero and human, and of his experience in a time not unlike our own when asserting Black equality is taken by many as a threat. Available Jan. 15 in theaters and via VOD. (NR)

Rock Camp ***
Yeah, it’s mostly a light-hearted behind-the-scenes tour of a weird subculture, but along the way you also end up with a few surprisingly touching character studies in folks getting a moment to live out their dreams. Director Doug Blush takes us into the 2019 Rock ‘n’ Roll Fantasy Camp in Las Vegas, profiling founder David Fishof and his 23-year project allowing ordinary Janes & Joes a week where they get to form a rock band with guidance from their musical heroes. Interviews and cameos from folks like Alice Cooper, Paul Stanley, Dave Mustaine and many more attest to Fishof’s success as a businessman making the most of his history as a sports agent and music promoter, and his ability to build connections. But the real entertainment comes from watching the campers like accountant Tammy Fisher navigate a transition from drummer to frontwoman, or a father bonding with his autistic son over their shared experience. There’s nothing particularly profound about watching middle-aged folks try to recapture a possible youthful dream, but neither is it a chance to snicker at them over what they do. For those about to rock—even if only for a few days a year—we salute you. Available Jan. 15 via SLFSatHome.org and ParkCityFilm.org. (NR)

Some Kind of Heaven ***1/2
Director Lance Oppenheim’s documentary dives into the world of The Villages—a massive retirement community of 130,000 residents in Central Florida—in a way that feels completely counter-intuitive, and turns out to be utterly fascinating. Though he includes scenes that show us the wide range of clubs and social activities, and a bit of history about The Villages’ creation, he chooses to focus on four characters: married couple Anne and Reggie; widowed Barbara; and for-all-practical-purposes homeless bachelor Dennis. Every one of these characters turns out to be fascinating, in completely unique ways; there’s compassion for Barbara’s quest to find companionship, and bemusement at the strain on Anne and Reggie’s marriage caused by his (to put it generously) eccentric behavior. What Oppenheim reveals isn’t some dark underbelly of a place that sells itself as being an idealized locale for twilight years, but simply the reality that life’s complications don’t end at retirement. And he does so with beautiful filmmaking bolstered by David Bolen’s cinematography, the compositions and editing capturing this place with remarkable specificity. Conveying deep compassion for the distinctive challenges facing people at this time of life—from financial insecurity to loneliness—Some Kind of Heaven offers a rich portrait of people in their golden years who don’t always feel so golden. Available Jan. 15 via SLFSatHome.org. (NR)

Spoor **1/2
There’s so much weirdness going on in this drama from co-writer/co-director Agnieszka Holland (the latter with Bark’s Kasia Adamik) that it almost doesn’t matter than too little of it pulls together. Set in the Klodzko Valley near the Polish/Czech Republic border, it follows a solitary, animal-loving woman named Duszejko (Agnieszka Mandat) who gets caught up in a series of suspicious deaths. As a character study alone, it’s a potentially interesting one, as Mandat tries to fold Duszejko’s belief in astrology into her anger towards sport hunters and her kind heart towards outcasts. It’s just not clear what Holland and company are doing with the flashbacks that emphasize various characters’ damaged home lives, or why the bold musical score keeps suggesting that this is a suspense thriller even when Duszejko has spilled her purse into the middle of the road while trying to find her cell phone. It’s not exactly a mystery, not exactly an animal-rights tract, not exactly a morality tale about chickens coming home to roost—but it is the kind of movie where insect-riddled corpses share screen time with characters getting stoned around a campfire while singing “House of the Rising Sun.” Available Jan. 15 via SLFSatHome.org. (NR)

The White Tiger ***
Ramin Bahrani has built his 15-year filmmaking career on dramas that pivot on questioning the economic realities of the American Dream; here, he finds a similar kind of story in India. Adapting Aravind Adiga’s 2008 novel, he follows a young man named Balram Halwai (Adarsh Gourav) who leaves his rural Indian town to work as a servant to Ashok (Rajkummar Rao), the son of a wealthy landlord. The narrative backtracks from a prologue that promises a darker turn, which makes the tone of the story’s first half—almost absurdist comedy as it addresses Balram’s sense of deserving his lowly status—a bit of a surprise. That opening becomes a sneaky way of easing viewers into a savage takedown of India’s societal structure, built on open corruption and brutal enforcement of economic power. Gourav’s performance gets a powerful jolt out of his shift from kowtowing victim to determined social climber, built on a unique self-loathing that his culture’s unwritten rules perpetuate a two-tiered system. It’s perhaps too obvious where the story is ultimately headed thanks to the flashback framing structure, lessening the grim punch of key plot turns, but it’s still powerful to watch The White Tiger capture the birth of a revolutionary consciousness. Available Jan. 13 in theaters; Jan. 22 via Netflix. (R)