Nobody, Bad Trip, Six Minutes to Midnight and more 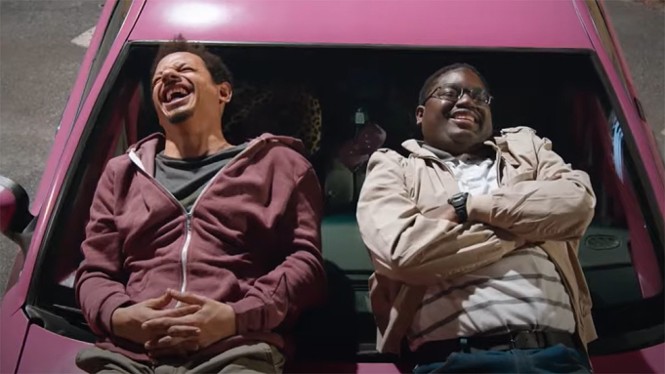 Bad Trip **1/2
The combination of loose narrative and hidden-camera pranking—á la Borat or Jackass Presents: Bad Grandpa—is mostly dependent on the creativity and reaction footage involved in the latter. That’s part of the frustration with this movie in which two Florida pals—Chris (Eric Andre) and Bud (Lil Rel Howery)—drive to New York so Chris can connect with the girl he’s had an unrequited crush on since high school. The car they’re using happens to be stolen from Bud’s thuggish sister (Tiffany Haddish), so theoretically there’s some actual tension built into the story. But mostly it revolves around the gags, which range from Chris breaking out into a song-and-dance number in a mall food court to sneaking into the zoo enclosure of a “gorilla.” The set-ups themselves are mostly fine, if predictably crude, and enthusiastically performed by the cast; it’s just completely out of anyone’s control whether or not they get great material from the way the “civilians” respond to the bizarre stuff happening in front of them. There are a few priceless moments, like the guy who’s trying really hard not to literally be an accessory to Haddish’s escape from prison. It just feels like too much of the time, all the filmmakers have to work with is startled expressions, and maybe someone muttering “oh, shit.” Available March 26 via Netflix. (R)

Kuessipan ***
A vivid sense of place can carry a narrative a long way, even when some of the basic plot dynamics seem familiar. A prologue introduces us to the lifelong friendship between two young women on an Innu First Nations reserve in northeastern Quebec—Mikuan (Sharon Fontaine-Ishpatao) and Shaniss (Yamie Grégoire)—whose relationship is challenged when Mikuan begins dating Francis (Étienne Galloy), a white high-school classmate. Director Myriam Verreault and co-writer Naomi Fontaine (adapting Fontaine’s novel) present issues like abusive men and alcoholism as aspects of Innu life, but far from endemic; the goal here isn’t to highlight the misery of the setting. Instead, it’s a richly-observed portrait of feeling limited by your world even if you still love it, making it sort of a thematic second-cousin to Lady Bird. Fontaine-Ishapatao’s strong performance gives an emotional resonance to Mikuan’s journey, while Verrault delivers several memorable filmmaking choices highlighting connection or separation. If some of the plot developments ultimately feel too obviously telegraphed, and the central friendship more one-sided that seems ideal, Kuessipan wraps them in enough solid details to give this narrative a welcome uniqueness. Available March 26 via SLFSatHome.org. (NR)

Six Minutes to Midnight **
I’d love to see a documentary about the real-life boarding school for German girls that existed on English seaside in the years between the World Wars, but not so much a limp, completely fictional spy drama using that location as its backdrop. In August 1939, Thomas Miller (Eddie Izzard, who also co-wrote the script) takes a teaching position at the Augusta-Victoria school, replacing someone who disappeared under mysterious circumstances. But like his vanished predecessor, Miller is a British government agent, gathering intelligence in the likely run-up to war with Germany. Various subplots percolate, including the school’s headmistress (Judi Dench) being somewhat blinded to international affairs by her devotion to her students, and a German physical education instructor (Carla Juri) with her own agenda. The focus, though, is on Miller and the various perils he faces, and director Andy Goddard simply isn’t able to give those perils real tension; one sequence of Miller on the run literally pauses so he can take a nap. There’s a much more compelling story in the idea of those like Dench’s headmistress who wanted, against all reason, to believe that individual relationships could transcend the antagonisms between nations. Available March 26 in theaters and via VOD. (PG-13)

Tina ***1/2
Tina Turner’s autobiography and the subsequent release of What’s Love Got to Do With It might lead you to believe there’s nothing new to say about the singer’s life story, but the simple passage of nearly 30 years since that film offers a new and compelling context. Oscar-winning directors Dan Lindsay and T.J. Martin (Undefeated) do explore some of that familiar story in a mostly-chronological narrative, following her early career with Ike Turner and the behind-the-scenes physical abuse Ike inflicted. But the majority of the film addresses her post-Ike experience, including her re-emergence as a pop icon in the 1980s and her 30-year relationship with husband Erwin Bach. Mostly, it’s fascinating to watch Tina battle against being defined by the story we now know about Ike’s abuse, as she faces repeated questions in interviews and awkwardly discusses not wanting to watch What’s Love Got to Do With It at its festival premiere. Lindsay and Martin do make room for plenty of performance footage amidst the talking-head bits by friends, artistic collaborators and Tina herself circa 2019, reminding us what an absolute force of nature she was on stage. At the same time, they allow her to bow out from public life by emphasizing the woman she became, not just what she endured. Available March 27 via HBO. (NR)

A Week Away **
There is a very specific target audience for a movie that High School Musical and turns it into a jukebox musical of Christian pop hits—and if you are that target audience, someone has heeded your silent call. It’s the story of Will Hawkins (Kevin Quinn), a troubled teenage orphan down to his last strike in the foster-care system when he’s invited to spend a week at a summer Bible camp. That’s the cue for a chaste romance with fellow camper Avery (Bailee Madison), and an even-more-chaste mutual crush between Will’s nerdy bunkmate (Jahbril Cook) and Avery’s best friend (Kat Conner Sterling), interspersed with competitive events between the camp’s three teams and several musical numbers. Director Roman White is a music-video veteran, and shoots the choreography (by Melena Rounis) with enough energy to keep things lively. How far that gets you depends on whether you want to hear a soundtrack of tunes by Amy Grant, Michael W. Smith and others crooned by fresh-faced ersatz Zac Efrons and Vanessa Hudgenses. The preaching level stays fairly low, but so does much reason to watch if you’re not someone who is already 100% part of the choir it’s preaching to. Available March 26 via Netflix. (NR)