Movie monsters battle in the culmination of a franchise buildup 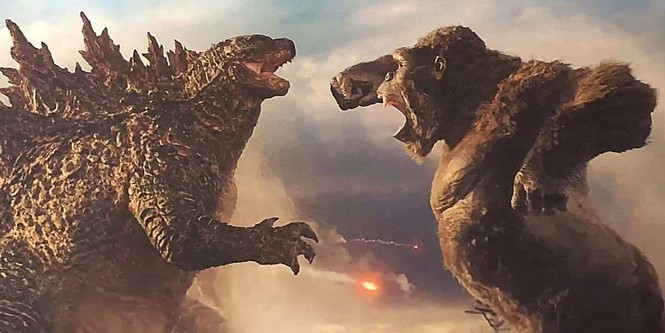 They are an indominable force that seemingly cannot be stopped. They emerge unbidden, heedless to the damage they cause. It’s their world, and everything else just hopes to survive.

Godzilla vs. Kong is an inevitability, something that we’ve watched Warner Bros. and Legendary Pictures setting up in 2017’s Kong: Skull Island and 2019’s Godzilla: King of the Monsters. We’ve reached the point with blockbuster monoliths like this where they exist largely to keep a ball rolling, and you can only hope that the movie you’re watching is of as much concern to the people behind the scenes as creating a viable scenario for the next movie. There was Kong, and there was Godzilla, and by all the money that can be made, there was going to be a Godzilla vs. Kong whether we puny humans like it or not.

As it turns out, there’s a deeply weird structure to this movie that makes it feel even more patched-together than you might reasonably expect from joining two previously distinct back-stories. On Skull Island, where Kong continues to reside, the giant ape has been secured in a domed habitat by a scientific team led by Dr. Ilene Andrews (Rebecca Hall); over in the mainland, Godzilla is attacking a research facility, apparently unprovoked—much to the consternation of Madison Russell (Millie Bobby Brown), who knows enough from Godzilla: King of the Monsters to suspect that there must be something else going on. The connective thread is Walter Simmons (Demián Bichir), a techno-oligarch convinced that we will be perpetually threatened by the “titans” unless we find a suspected power source in the theoretical/mythological Hollow Earth—and that Kong can lead people there.

What follows involves two almost entirely parallel narratives: the research team bringing Kong to the theorized Antarctic entrance to Hollow Earth, including Dr. Andrews, her Deaf young ward (Kaylee Hottle) and physicist Dr. Nathan Lind (Alexander Skarsgård); and Madison’s efforts to find out why Godzilla attacked, assisted by a classmate (Julian Dennison) and a conspiracy-theory podcaster (Brian Tyree Henry). And in fact, “almost entirely parallel” is an understatement, because the two individual sub-casts never interact. It feels like an unintentional callback to the Raymond Burr scenes the original Godzilla, shot entirely separately and only incidentally connected.

Of course, you could make the argument that the only interaction that matters is between Godzilla and Kong themselves, and director Adam Wingard doesn’t skimp in that respect. We don’t even have to wait until the third act for the clash of the titans, as we get a nifty battle in the middle of the ocean as prelude to the cityscape-disintegrating finale. Yet there’s a sense of rampaging fun missing in those skirmishes that was most evident in Kong: Skull Island. Kong punches Godzilla; Godzilla bites Kong; occasionally one uses some sort of large object, like a ship or a building, as a weapon against the other; and it all happens without enough of those moments that gets you giggling over the creative mayhem.

Part of the problem is that from a narrative standpoint, this is never a level playing field. Despite Madison’s role as principal cheerleader for Team Godzilla—convinced that he’s somehow being manipulated and is really good—it’s hard for our sympathies to be anywhere but with Kong. After all, he’s the one who’s been imprisoned in an ersatz habitat, drugged and chained to serve our needs, able to communicate with humans through sign language, and so forth. Godzilla’s whole thing is that whenever he can detect another titan around, he’s obliged by his very nature to want to come and kick its ass into submission. And it’s not exactly easy to feel compassion towards a motivation akin to that of some drunk bro in a bar.

On a baseline level, Godzilla vs. Kong is more satisfying than Godzilla: King of the Monsters, largely because of having Kong around as a more expressive object of audience concern. The humans occupy their obligatory space of advancing the narrative without distracting much from the main event, though it’s awfully hard at this moment in history to accept a conspiracy theorist like the one played by Henry as a source of comic relief. It’s worth noting that Godzilla vs. Kong, unlike its two franchise predecessors, includes no post-credits sequence setting up a next chapter, which feels like a step in the right direction. We’re here, after all, to see these particular monsters punch one another, even if the bigger monster in this movie—a rich guy trying to win the battle of the titans—feels like too on-the-nose a metaphor for the real subtext of the movie-franchise battles.

Godzilla vs. Kong opens March 31 in theaters and via HBO Max.