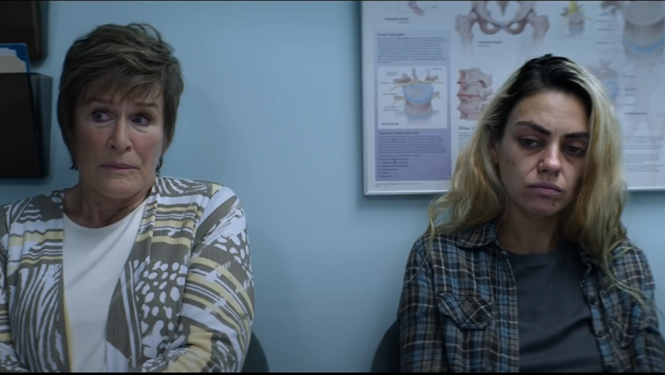 About Endlessness **
Over the course of 20 years, Swedish filmmaker Roy Andersson has remained committed to his stylistic gimmick—master-shot tableaux of simple situations, often building to absurdist punch lines—to the point where it’s not clear what more he might have to say within this framework. Once again, his episodic scenes aren’t really connected to any overarching narrative, though a couple of characters—including a minister despairing over his loss of faith—do recur at various points. Mostly, however, we have moments in the lives of everyday people, here supplemented with the voice of an omniscient narrator (Jessica Louthander) whose observations at times step on whatever simple emotion might have been found in a bit like a father pausing during a downpour to tie his young daughter’s shoes, or a woman arriving at a train station to find no one waiting for her. At their best, Andersson’s meticulously constructed shots can hit their black-humored marks, or capture something painterly in a scene of people transfixed by falling snow. At their worst, those shots can start to feel like someone doing a parody of a Roy Andersson movie. Available April 30 via SLFSatHome.org. (NR)

Four Good Days ***
Addiction stories are, unfortunately, all too common both in real life and in movies; this one finds enough spiky complexity to undercut the more obvious rhythms of family melodrama. Writer/director Rodrigo García casts his Albert Nobbs star Glenn Close as Deb, whose 31-year-old daughter Molly (Mila Kunis) is on the latest of many attempts to kick a decade-plus-long opioid addiction. The narrative focuses on a week-long span as Molly tries to clear her system of drugs to be eligible for an opioid-blocking medication, and García effectively captures how the years of Molly’s addiction have left Deb unable to trust her at all, and practically wishing she could stop caring about her troubled daughter. Yet rather than making Deb a saintly mom, Close’s performance adds a dynamic of guilt over the choices Deb made during Molly’s childhood. García chooses perhaps the most prosaic manner possible to reveal that history, and you can almost predict where the final shot will take place as soon as a specific prop is introduced. There’s still a lot of humanity here in two people figuring out if it’s ever too late to give one another one more chance. Available April 30 in theaters. (R)

Limbo **1/2
It’s not easy to combine deadpan humor and earnestness when dealing with a hot-button issue, and writer/director Ben Sharrock teeters awkwardly back and forth across that line. On a fictional island off the coast of Scotland, several immigrant asylum-seekers—including Syrian-born Omar (Amir El-Masry) and his Afghan roommate Farhad (Vikash Bhai)—wait for resolution of their status, unable to work or travel anywhere else. Most of the narrative is built around Omar’s complex feelings about being separated from his parents currently living in Istanbul, while an older brother continues fighting in the Syrian civil war. But El-Masry’s often impassive performance often doesn’t work with the more serious material, while providing a perfect counterpoint to the more humorous scenes like the ongoing classes in Western cultural norms taught by a well-meaning local couple. There’s a lot of material to unpack in the struggles of immigrants to assimilate in places that don’t always want them, while still worrying about those they left behind. And it’s not easy for that material to coexist peacefully with punch lines about what an unwelcome sexual advance looks like, or getting so caught up in watching Friends DVDs that you start arguing about whether or not Ross and Rachel really were on a break. Available April 30 in theaters. (R)

The Mitchells vs. The Machines ***
Credit to co-writers/co-directors Michael Rianda and Jeff Rowe for putting in the effort to give their lively CGI animated adventure a visual sensibility that doesn’t feel copied-and-pasted from the work of their animation brethren. On the even of her long-awaited departure for college, teenager Katie Mitchell (Broad City’s Abbi Jacobson) ends up on a cross-country road trip with her family—dad Rick (Danny McBride), mom Linda (Maya Rudolph) and younger brother Aaron (co-writer/co-director Rianda)—just as a tech company’s new AI robots are preparing to conquer humanity. The narrative through-line is a nice effort at real emotional content, built around the conflict between quirky and creative Katie and her frequently non-supportive dad, though it never quite finds its tear-jerking climax moment like top-tier Pixar. Still, the chuckles come fairly consistently, while Rianda and Rowe build the look of their action scenes in particular around Katie’s own amateur filmmaker aesthetic, full of hand-drawn hearts and rainbows. In a story about someone longing for her own individuality to be appreciated, it matters a lot that The Mitchells vs. the Machines tries for its own individuality. Available April 30 via Netflix. (PG)

Percy vs. Goliath **
Here’s one of those stories that’s clearly built around its most obvious audience-appeal premise, yet where the really interesting story exists on the fringes. Director Clark Johnson’s feature tells the fact-based story of Percy Schmeiser (Christopher Walken), a farmer in small-town Bruno, Saskatchewan circa 1998 who finds himself on the wrong side of a corporate lawsuit when some Monsanto GMO seed ends up growing in his fields. The title itself tells you all you need to know about the basic plot arc, with Percy and his wife Louise (Roberta Maxwell) having their salt-of-the-earth lives upended by both the legal battle itself and by the way it alienates them from their friends and neighbors. But there’s also the story of an environmental non-profit—in the form of activist Rebecca (Christina Ricci)—who sees Percy’s case as a way to push back against GMOs. And there’s some great, if too sparse, material focusing on Rebecca and her colleagues figuring out the media angle, including her boss musing “Schmeiser … I can’t sell that name.” Walken is perfectly solid in his own growing realization that this issue has international ramifications; I just couldn’t help wanting a whole spin-off movie about the cynical machinations by which well-meaning people end up using others to achieve what they believe is the greater good. Available April 30 in theaters and via VOD. (PG-13)

Separation **
Horror is a great way to approach issues of guilt and trauma, but when you’re only prepared to pussyfoot around those issues, you end up with something limp and muddled. Jeff and Maggie Vahn (Rupert Friend and Mamie Gummer) are a couple whose collaborations—both personal and professional, as co-creators of a creepy comic-book series—have disintegrated into acrimony. On the verge of their divorce, Maggie is killed by a hit-and-run driver, leaving their young daughter Jenny (Violet McGraw) grieving, and possibly leaving a ghostly presence in their New York brownstone. Director William Brent Bell (The Devil Inside)—working from a script by Nick Amadeus and Josh Braun—takes a looooong time building towards any actual supernatural content, with most of the visual tension involving jump-scares and the unsettling design of Jeff and Maggie’s “Grisly Kids” characters. That wouldn’t be so much of a problem if Jeff’s arc from frustrated artist/lackluster dad towards responsible parent were more clearly defined, and if Maggie’s road toward “enough is enough” allowed us to see her as something besides a vindictive bitch. A few spooky bits and pieces can’t make up for a movie that clearly wants to be emotionally resonant, then spends more time on plot twists than character development. Available April 30 in theaters. (R)

Street Gang: How We Got to Sesame Street ***1/2
Having just last year read a biography of Jim Henson, I wondered if Marilyn Agrelo’s documentary wouldn’t offer me much that was new; it turns out that her adaptation of Michael Davis’s book is all about changing the narrative that “Jim Henson + Muppets = Sesame Street.” Agrelo digs deep into the team that in the late 1960s developed the radical premise that pre-school children—specifically pre-school children in economically disadvantaged communities—could learn from television: producer Joan Ganz Cooney; director Jon Stone; Lloyd Morrisett and the educators who eventually formed the Children’s Television Workshop. It’s certainly not that Henson is given short shrift, as Street Gang gives plenty of credit to the Muppets’ appeal for the out-of-the-box popularity of the show, and even notes how Henson’s background using the Muppets for commercials made him a good fit for the show’s philosophy of applying advertising principles to early childhood education. This documentary simply fills out the picture, tipping a hat to folks like composer Joe Raposo and all of those behind the scenes who took a chance on a concept that was made for a diverse country, with a cast that looked like a diverse country. The result is a portrait of a creative family dedicated to a crazy concept that succeeded beyond any of their wildest dreams. Available April 30 in theaters; available May 7 via VOD. (NR) 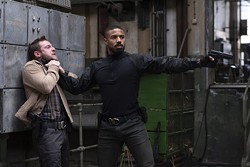 Tom Clancy’s Without Remorse **1/2
Perhaps it’s best not to expect anything from sturdy military thrillers besides sturdiness, and that’s the backbone of this adaptation of the crown prince of sturdy military thrillers. Michael B. Jordan plays John Kelly, a Navy SEAL Senior Chief who participates in an operation in Syria that turns his family into a target of Russian operatives—and turns Kelly into a vengeance-seeking machine. Most of what works here depends entirely on the charisma of Jordan, who keeps the humanity—and a welcome physical vulnerability—in a character who could have turned into a standard-issue unstoppable violence machine. Director Stefano Sollima (Sicario: Day of the Soldado) puts together a few effectively tense set pieces, particularly one involving a rapidly-sinking downed plane, though the climactic battle drags out in a way that doesn’t quite build the necessary intensity. Mostly, it feels like the attempts at inserting statements about geopolitics and real patriotism—much of it revolving around the shady character of a CIA operative (Jamie Bell)—bump up against the meat-and-potatoes stuff without adding depth to it. Patriotism in the 21st century might be a murky business, but Without Remorse gives its hero a mission that explores that murkiness in only the most superficial way. Available April 30 via Amazon Prime. (R)

The Virtuoso *1/2
Late in the first act of director Nick Stagliano’s tough-guy thriller, Anthony Hopkins—playing the veteran Mentor of a hired assassin referred to only as The Virtuoso (Anson Mount, sporting a graying beard and looking for all the world like he’s cosplaying “Ben Affeck as Bruce Wayne in a peacoat meeting Aquaman”)—gets the kind of monologue that makes it clear why a great actor would waste his time on such a grim slog. The principal plot finds Mount’s assassin on a mysterious job, in the wake of a hit that went bad and resulted in the death of an innocent bystander. That sort of emerging conscience is supposed to provide the movie’s character arc, as we’re expected to connect with this murderer because he feeds a stray dog and screams in frustration. It’s a potentially amusing touch that The Virtuoso has to practice in the mirror making faces expressing normal human emotion, except that even when Mount is supposed to be acting “normal,” he radiates the same icy demeanor represented by a guy who wears a black suit and tie to his hits, and shares his professional process in monotonous voice-over narration. Talented folks like Abbie Cornish, David Morse and Eddie Marsan can’t add any spark to all the deadly, style-deficient self-seriousness, but maybe that Hopkins monologue will show up on YouTube someday and you can appreciate a master at work. Available April 30 in theaters and via VOD. (R)