Movie Reviews: New Releases for May 14

Army of the Dead, Spiral: From the Book of Saw and The Killing of Two Lovers 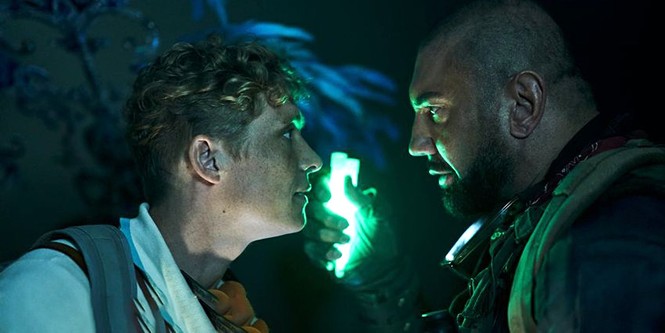 Army of the Dead **1/2
Given the personal tragedy in Zack Snyder’s life, it’s hard to ignore the poignant subtext of building his zombie action thriller around a father-daughter relationship. That doesn’t mean Army of the Dead’s fundamental Zack Snyder-ness will make it appealing to more than his devoted fanbase. After an accident in a military convoy unleashes a zombie scourge in Las Vegas, the city becomes a quarantine zone, conveyed in an opening credits sequence almost as narratively efficient as that in Snyder’s Watchmen. Several years later, military vet Scott Ward (Dave Bautista) is hired to recover millions in casino cash before the government nukes Sin City into oblivion. That, of course, requires putting a team together, and there’s some enjoyable stuff provided by Matthias Schweighöfer (as the safecracker) and Tig Notaro (as the helicopter pilot). Mostly, there’s a lot of carnage—and over 148 minutes it feels like a lot of carnage, however creatively some of it might be staged. After a few thousand rounds to the heads of the undead, all that remains is to decide whether everything that exists around the edges—like Bautista and his estranged daughter pondering a future food-truck venture, or an alpha-zombie who wears a cape and takes the murder of some of his undead underlings very personally—is dopey fun, earnestly emotional, or both, or neither. Available May 14 in theaters; May 21 via Netflix. (R)

The Killing of Two Lovers ***1/2
Robert Machoian’s earthy drama feels like it’s not messing around about its title right out of the gate: Our first images are of David (Clayne Crawford) standing in the bedroom of his estranged wife, Nikki (Sepideh Moafi), who is sleeping with the man she has started dating. It wouldn’t be fair to reveal exactly where it goes from there, but Machoian’s character study evokes some particular things about a couple from a small town, ranging from the single tracking shot showing the proximity of the house where David grew up to the one where he lived with Nikki and their children, to the sense of how quickly youthful dreams disappear. The filmmaker is also somewhat daring in his sound design, as he repeatedly uses non-diegetic noises like slamming doors to convey the tumult perpetually in David’s head. And there’s great material involving the complexities of a family trying to navigate a new chapter in their lives, from David and Nikki’s post-separation weekend “dates” to the differing ways their four children respond to the separation. Right up to its somewhat unexpected ending, The Killing of Two Lovers plays a tricky, naturalistic game with asking what, if anything, would actually constitute a happy ending for these characters. Available May 14 at Cinemark 16 Provo and via on demand. (R)

Spiral: From the Book of Saw **
My experience with the Saw franchise consisted entirely of the 2004 original before this kinda-continuation, but the centerpiece has always been a kind of perverse moralism—so it was initially intriguing to see that idea applied to the timely issue of corrupt policing. Chris Rock plays Det. Zeke Banks, long ostracized for his willingness to ferret out rotten cops, then assigned to a case that launches a serial killing spree of rotten cops that points to a Jigsaw copycat. Director Darren Lynn Bousman (Saw installments II-IV) provides a few of the series’ trademark Rube Goldberg killing machines built around the victims’ malfeasance, and the gore is a mix of close-up queasiness and borderline absurdity. Rock gives the material a humorous edge—and gets to play with one overt nod to the original Saw—but this is ultimately a whodunnit, and regardless of whether or not you outguess the script, the film’s ultimate success or failure depends on making the various desserts seem just. And given the real issues in American policing surrounding race … well, let’s just say that Spiral builds towards a resolution that feels not only completely unwilling to confront that part of the problem, but kind of feels actively insulting in the way it stages the climax. Available May 14 in theaters. (R)