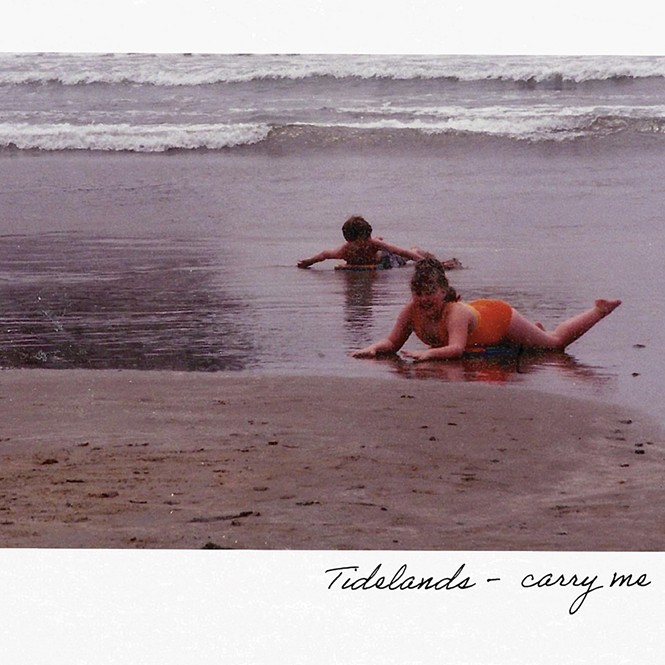 Tidelands, “Carry Me”
A new Utah duo is here with a fresh new track to add to their growing collection. Tidelands’ “Carry Me” is a sweeping track that fits snugly into both indie and pop, thanks to clean, clear vocals by Emilee Holgate and the lush instrumentals behind her, lent by her husband and musical partner Thomas Lundquist. While Holgate and Lundquist only have four—counting the new single—under their belt, they’re no strangers to the Utah music scene, as Holgate used to be in the popular band Kitfox. While their 2019 debut single “High” was all high energy, this new June 4-released single, “Carry Me,” provides a glimpse at a softer side to Tidelands. The track finds Holgate reflecting on a supportive love, the kind that “lights the corners” of one’s heart. While it’s a high-romance song filled with gushing emotion, there are still technical moments that keep it a little special to the ear, like the hard percussion at the beginning, or the brief guitar cranks that sound like the pangs of a bleeding-heart National song. You can find it and all of Tidelands’s other singles on Spotify.

Heelers, “Going Home”
For those who love their high energy rock, pay attention to local solo project Heelers. With heavy influence pulled from the grunge and garage rock corners—a somewhat culturally loaded connection that the man behind the project, Tyrus Watson, seems to acknowledge on the band’s website, where he implores “Help us become the next Creed.” But grunge rocks, and it’s nice to see people still referencing it. “Going Home” centers around one repeating, jammy ‘90s rock riff that’s heavy and happy to go on and on as Watson sings in a rough and tumble voice to match. He sings very plainly about feeling “Shut down and cut down to the bone / I'm just a shell of what I was” before doubling down on just shrugging it off and going home. It’s a melodic, crunchy track that pays honest tribute to what remains a really rad genre, and you can check it out at heelersmusic.com.

Icky Rogers , “Birth Chart”
Out in April in honor of the astrological new year, Icky Rogers’ single “Birth Chart” is good listening indeed for any time of the year. In a clever reference to the popular trend of asking others about their zodiac sign (to determine compatibility, duh), SLC’s “queer rap assasin” Icky Rogers’s “Birch Chart” is a summer-ready pop rap track that’ll leave you star-struck. At three and a half minutes, the track goes by surprisingly breezy and quick thanks to Rogers’ equally easy-breezy flows and winking innuendos (“what’s your chart like?” “baby, you’re a planet I’ve just got to explore”). Besides the bubbly, charismatic production that sounds perfect for a night getting ready to go out on the town (because we can do that again), Rogers’s lyrics are just too fun to ignore here. The whole song is replete with zodiac, constellation and planet references, Rogers even going as far to list off all—or almost all—of the planets and how they’re in, ahem, conjunction with the crush in question. And in the end, it’s funny that Rogers goes to such an extent to “study you just like a birth chart,” when in fact, the crush who doesn’t “like the pretense” of zodiac signs and is “so independent” that they won’t let Rogers see their whole heart … sounds like an exasperating Saggitarius, the sign that is always least interested in zodiac mythology. Now I’m just left wondering what Rogers’ sign is. Stream it on Spotify next time you’re reading your horoscope.