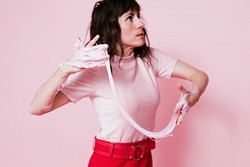 June’s 12 Minutes Max
This series of 12 Minutes Max, presented by Salt Lake City Public Library, is a little different than usual, in that instead of the usual three short acts to look forward to seeing, the library has narrowed it down to two acts this time around, so that one of them may be a bit longer. For the shorter, more traditional piece, Ben Swisher presents a home video called Swimmers, which features “a blurry musical diary of being trusted to keep things alive and getting better at holding your breath.” Swisher, though not native to Utah, is a well-known multi-instrumentalist around these Northern Utah parts, and spends his time often collaborating with other local artists or working on odd projects like Swimmers. His video will be followed by Molly Heller’s longer work, Full View, a multi-media piece directed by Heller (pictured) in collaboration with SLC’s Heartland Collective and the Ririe-Woodbury Dance Company. Full View digs into the “private and public” by combining the private aesthetics of movements developed at home that are revealed on the stage, and digging into questions about different kinds of environments. Both performances happen this Sunday, June 20 at 2 p.m. and can be streamed at vimeo.com/559404311. Find more info at slcpl.org/events.

Joslyn, “Set in Rhythm”
If you liked Jessie Ware’s 2020 disco-infused album What’s Your Pleasure, you’ll dig what local artist Joslyn is setting in motion here with “Set in Rhythm.” The comparison is mostly in that Joslyn’s singing style is sultry and slick like Ware’s, and that “Set in Rhythm” is a funk-infused sensual trip, from the instrumentals to lines like, “You’re breathing in, I’m breathing out / heaven knows what we’ve been given.” Lightweight, psychedelic guitars and low bass ripple delicately throughout the track among rather minimal beats and winking synths, all of which still packs a punch as the undercurrent to Joslyn’s groovy journey into a classy kind of lustfulness. It appears to be a follow-up to her 2006 self-titled album, which shares a surprising amount style-wise with this new 2021 single. While a lot of time has passed, the track’s commonality with the past album only spells consistency, and the song itself has its own delicious story to tell. Stream it on Spotify and follow Joslyn on Instagram at @joslynmusic. 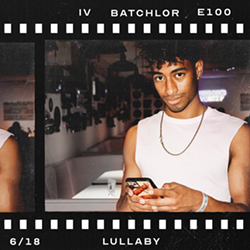 Batchlor, “Lullaby”
Among Utah’s pop stars-in-the-making is Batchlor, whose latest single out today, June 18, is a glittery contemporary pop and R&B wonderland of a track. It joins the equally radio-ready single he released in 2020, “Do You Like It,” and is just as much of a romantic serenade that will appeal to a certain type of “anygirl” listener. Batchlor’s been building a following outside these singles for some time, with a heavy presence on TikTok, the world’s new star-maker. But it’s good to see a second catchy single in “Lullaby” out in the world, proving that Batchlor’s a real creative powerhouse and not just an internet content maker like so many tend to settle for being. Despite its name, this track is the opposite of sleepy, and you can stream it wherever you stream. Keep up with Batchlor on Instagram at @batchloriv.