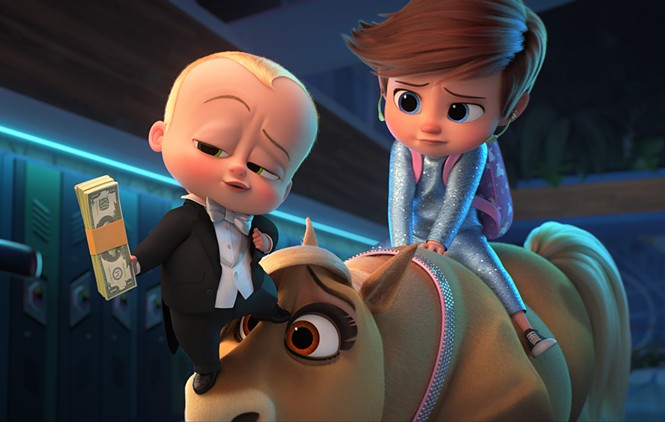 The Boss Baby: Family Business **1/2
The original 2017 Boss Baby got away with mimicking Toy Story’s allegory for sibling rivalry through sheer relentless energy and visual imagination; this sequel seems to double down on the formula, with diminishing returns. Our imaginative hero Tim Templeton is now an adult (James Marsden) and a father himself with two daughters, and an estranged relationship with his younger, former Boss Baby/now wealthy businessman brother Ted (Alec Baldwin). But when Tim’s infant Tina (Amy Sedaris) reveals herself to be an agent of Baby Corp, the Templetons are pulled back into another world-threatening scenario. Naturally, all of that is just window dressing for Tim to fix the fraying connections not just with Ted, but with his older daughter Tabitha (Ariana Greenblatt), in a premise that finds Tim and Ted both de-aged back to their childhood selves. It’s engaging enough in the moment, what with crazy ninja babies and Jeff Goldblum running a possibly sinister Montessori-like school, but it’s hard to know what returning director Tom McGrath is trying to prove by continuing to push the Toy Story comparisons: a toy lamenting being stuck in the attic; an escape attempt from a day-care facility; the kid version of Tim taking on the alias “Lightspeed.” It starts to feel like a weird flex, except that the manic energy here can’t find a real heart to match. Available July 2 in theaters and via Peacock. (PG)

The God Committee **1/2
Some theatrical works just feel like a bad fit for cinematic translation, and that seems to be the case with writer/director Austin Stark’s adaptation of Mark St. Germain’s play. The narrative is split across two time-frames, seven years apart, focused on two New York cardiac surgeons—Dr. Jordan Taylor (Julia Stiles) and Dr. Andre Boxer (Kelsey Grammer)—on their hospital’s organ transplant committee, facing a decision regarding which of three candidates will get a new heart, as well as the later ramifications. Not surprisingly, money complicates the decision-making process, along with Taylor and Boxer’s personal relationship, and the text wrestles intriguingly with questions of medical ethics, the greater good, and where hard data can’t tell the whole story. But while Stiles and Grammer anchor the cast effectively, Stark never quite does the cinematic heavy lifting story like this, built on thorny philosophical matters, needs in order to work on a screen, without the in-person passions of the actors in the room. And there’s a weirdly anti-climactic quality to the resolution, which seems to let people off the hook. Matters of life and death can be the stuff of great drama, but not always when a camera is on people talking about matters of life and death while sitting around a table. Available July 2 in theaters and via VOD. (NR)

No Sudden Move ***1/2
Everything is blurry around the edges here, as Ed Solomon’s script full of double- and triple-crosses meshes perfectly with the fisheye lenses employed by director Steven Soderbergh (oops, make that cinematographer “Peter Andrews”). In 1954 Detroit, three small-time criminals—Curt (Don Cheadle), Ronald (Benicio Del Toro) and Charlie (Kieran Culkin)—take on a seemingly simple job involving a little corporate espionage, but which almost immediately goes perilously sideways. The narrative darts between multiple sub-plots, providing great moments for a supporting cast including Jon Hamm, Amy Seimetz, Bill Duke and Ray Liotta, and a follow-the-stolen-whatchamacallit premise that initially seems McGuffin-esque. But as entertaining as it is watching the characters try to outwit (and outlive) one another, Solomon ends up poking around in something perfectly cynical about wealth and power that manages to evoke Chinatown. Everything is built around reminders of where people exist in the pecking order, from what they respectively get paid for the same job, to how an incompetent middle-class white guy can manage to emerge unscathed. One guest cast member might underline it all a bit too clearly in what amounts to a “villain speech,” but it doesn’t undercut the way this heist thriller gives its genre pleasures a jolt of relevance. Available July 1 via HBO Max. (R)

The Tomorrow War ***
A lot of familiar bits and pieces from other movies make up the DNA of this science-fiction spectacle, but the way they’re put together still winds up mostly satisfying. In 2022, Dan Forester (Chris Pratt) is a military veteran/scientist dissatisfied with his life as a high-school teacher—just about the time humans from 30 years in the future travel back to recruit fighters in a thus-far-losing battle against alien creatures. Screenwriter Zach Dean builds the narrative around that time-worn disaster movie trope of estranged/separated family members, with a framework that also includes a heaping dose of Alien, Aliens and Edge of Tomorrow. And the attempts to build in other kinds of subtext—from the world’s likely reaction to news that the future is doomed, to veterans wrestling with PTSD—aren’t developed enough to feel like more than token efforts. Mostly, though, it’s a big bug hunt, and director Chris McKay (The LEGO Batman Movie) gives the battle sequences plenty of gusto to match the bombast of Lorne Balfe’s score, while it's an interesting surprise to find the third act beginning where other movies of this kind simply would have ended. It would be nice to have a lead actor with more than Pratt’s genial goofball presence to anchor the attempts at an emotional core, but sometimes you realize you’ve just missed the kind of heroic action movie that you really wish had a chance to play in a theater. Available July 2 via Amazon Prime. (PG-13)

Tove ***
Real lives are messy, and biopics rarely allow for that messiness in their typical points-on-a-timeline narratives; this one doesn’t try to fit its main character into a tidy psychological box, for better and for worse. Director Zaida Bergroth profiles Finnish writer/artist Tove Jansson (Alma Pöysti), creator of the “Moomin” books and comic strips, through several crucial personal and professional moments from the mid-1940s to early 1950s. Much of that material deals with two key romantic relationships—one with a man, socialist philosopher Atos Wirtanen (Shanti Roney), and the other with a woman, theater director Vivica Bandler (Krista Kosonen). But there’s also a focus on Tove’s uncertainty about her career path, as her success at cartooning clashes with her desire to be taken seriously as a visual artist, in part due to pressures from her famed sculptor father, Viktor Jansson (Robert Enckell). There’s tremendous complexity to Tove’s personality, as a free-spirited creator pulled between competing desires and societal influences, and Pöysti plays that tension effectively in a way that still feels like a consistent, singular person. It does make for an occasionally bumpy journey as the paternal and romantic conflicts interweave without always informing one another, yet it’s still worth it for a character study of all the ways someone can need to make peace with who they really are. Available July 2 via SLFSatHome.org. (NR)

Zola ***
“Based on the tweet thread by ...” feels like a cruel joke version of storytelling in the social-media age, but director Janicza Bravo and her co-writer Jeremy O. Harris pull out the stops in providing a spark of punky energy to this probably kinda mostly true story. In October 2015, waitress A’Ziah “Zola” King (Taylour Page) meets Stefani Jezowski (Riley Keough) while at work, and the two become instant BFFs. Stefani invites Zola on a trip to Florida where the two occasional pole dancers can do some work—but it's another kind of work that Stefani is really up to. Nicholas Braun and Colman Domingo fill out the supporting cast, and all four of the principals are terrific at fleshing out this propulsive caper narrative. It’s really all about the way Bravo conveys the increasing craziness of this story as it was tweeted in real time, from direct address narration, to a sound design foregrounding familiar digital-era noises, to instances of unreliable narration. She and Harris never try to push Zola into some kind of big statement about Who We Are Today, and fittingly for something inspired by a tweet thread, it basically just stops rather than having an actual ending. Like Twitter itself, it might not offer much substance, but someone who knows what she's doing can make it an entertaining diversion. Available June 30 in theaters. (R)
Prev
Next