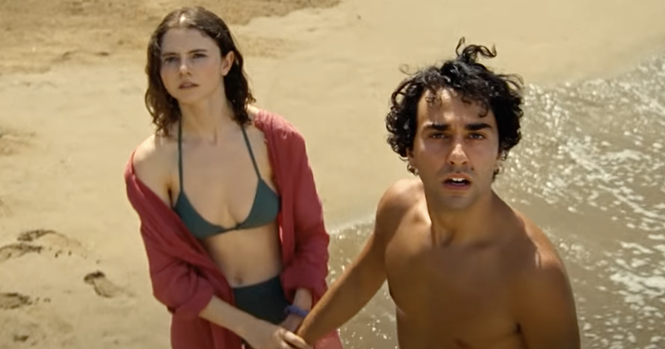 Joe Bell ***
Just laying this out on the table: Given Mark Wahlberg’s documented history as a young man, it’s not easy accepting him in the role of a spokesperson against bigoted violence. Then again, regret over narrow-mindedness is baked into director Reinaldo Marcus Green’s fact-based story of Joe Bell (Wahlberg), a father in small-town Oregon who embarks on a cross-country “walk for change” in honor of his 15-year-old son Jadin (Reid Miller), who was bullied for being gay. The screenplay—by the Brokeback Mountain team of Larry McMurtry and Diana Ossana—flips back and forth between Joe’s journey and the circumstances that led up to it, allowing plenty of time to understand the torment experienced by Jadin; Miller is phenomenal in a harrowing sequence where he’s reaching out by phone for help he can’t quite find. But the focus is generally on Joe’s physical and metaphorical journey towards understanding his own role in contributing to Jadin’s pain, and the filmmakers are wise not to turn him into a saint, emphasizing how his speeches were earnest but far from inspirational, and the extent of his short temper. The main challenge here is extra-textual: As effective as this storytelling is, can you see the story being told, and not the actor who might be trying to convince us, “Look at me, I’ve learned an important lesson”? Available July 23 in theaters. (R)

Old **
There are—and this is just a rough estimate—a thousand different ways M. Night Shyamalan could have made this same basic premise dramatically and/or thematically compelling, and he somehow manages to avoid nearly all of them. Loosely adapting a French graphic novel, he tells the story of a group of vacationers on a tropical island—including a family with parents (Vicky Krieps and Gael García Bernal) on the verge of separating—who find themselves on an isolated beach where they begin aging at a rapidly accelerated rate. Shyamalan has always had a facility for delivering an unsettling visual or two, and early on he’s great at giving the kids in the narrative plausibly quirky personalities. But everything that could have made for rich allegory here about appreciating the present moment or considering the fleeting nature of life is either dispatched quickly in on-the-nose dialogue, or overwhelmed by restless camera movement, or sacrificed to a weird subplot involving a racist doctor (Rufus Sewell) with a violent case of dementia. And that’s saying nothing of the late introduction of an ethical question that Shyamalan seems to have no interest in actually wrestling with. Over his 20-year career, the filmmaker has often been able to find depth in his buzzy genre films, but Old finds him unable to get out of his own way. Available July 23 in theaters. (PG-13)

Once I Was Engaged **
Taking a sequel in a completely different direction from the original certainly isn’t inherently a problem—except that in this case, writer/director Maclain Nelson lost nearly everything that made 2015’s Once I Was a Beehive so charming and affecting. The original film’s protagonist, Lane (Paris Warner), becomes a glorified cameo here, as the focus turns to Bree Carrington (Clare Niederpruem, the filmmaker’s wife), and the tumult that ensues when she impulsively decides to accept a proposal from her boyfriend Thys (Tanner Gillman) to get married just a couple of months down the road. What follows is mostly sitcom silliness as the preparations overwhelm everyone, particularly Bree’s mother (Lisa Clark), and we get a crash course in the all-important nature of marriage in Mormon culture. And that’s the biggest frustration with Once I Was Engaged: Where Once I Was a Beehive was thoughtful and sensitive about faith, here Nelson goes full missionary, delivering a narrative that might delight Latter-day Saints with familiar touchstones but offers little for those who aren’t already believers. Clark’s performance provides an engaging comedic anchor, and the Hawaii locations are lovely, but real emotion feels like an afterthought competing with gags about wedding registries and G-rated bachelorette parties. Available July 21 in theaters. (PG)

Playing With Sharks **1/2
Here is the very definition of a perfectly solid documentary profile that almost never takes the next step to being something fully engrossing. The subject is compelling enough: Valerie Taylor, the Australian-born underwater photographer—and later environmental activist—best known for her work with her husband Ron providing up-close footage of sharks for movies like Blue Water, White Death and Jaws. The early biography provides an interesting portrait of Valerie’s journey from child with polio to adventurer, and the final half hour digs into Valerie and Ron’s work to change the public perception of sharks as killers, and their regret at participating in the movies which created that perception. Yet despite having access to Valerie as an interview subject, reflecting on her life and still diving as an octogenarian, Playing With Sharks feels less like a biographical portrait than a showcase for all of the amazing footage she accumulated over the course of her career. There are worse ways to spend 90 minutes than appreciating that footage, and the risks that went into capturing it, but it feels like a missed opportunity not to understand more about the person behind the images. Available July 23 via Disney+. (NR)

Settlers **1/2
The thin line between stripped-down and incomplete is where writer/director Wyatt Rockefeller’s science-fiction drama lives for the entirety of its 103 minutes, flirting with both profundity and obscurity. At the outset, we find a family—Reza (Jonny Lee Miller), Ilsa (Sofia Boutella) and their daughter Remmy (The Florida Project’s Brooklynn Prince)—living seemingly alone on a hardscrabble farm away from Earth. But the “seemingly” part is revealed to Remmy to be untrue, first by the word “LEAVE” painted onto one of their windows, then by the arrival of a stranger (Ismael Cruz Córdova). The word “Mars” is never spoken, and similarly a ton of the backstory—why the family ended up there, who originally operated the farm, why they are able to breathe outdoors—is either left unsaid, or trickled out slowly. For the most part, that’s fine, as Rockefeller seems mostly interested in emphasizing the basic brutal truths of human nature that are bound to follow wherever people go even if they managed to ditch an increasingly uninhabitable planet. Despite Prince’s stellar performance, however, the character behavior keeps taking bizarre, out-of-nowhere turns. It’s one thing to fashion an allegory, but ultimately your people still need to act like … well, people. Available July 23 in theaters and via VOD. (R)

Stuntman **
One issue with this documentary profile of veteran stuntman Eddie Braun feels endemic to its construction, and another feels like a “me” problem. Director Kurt Mattila focuses almost entirely on Braun’s quest from 2014-2016 to duplicate a legendary but failed stunt by his hero, Evel Knievel: the 1974 rocket-powered launch across Idaho’s Snake River Canyon. That focus is a definite hindrance, because even at only 85 minutes, Stuntman feels padded with all of the preparations and occasional disappointments; there are only so many times, and so many different ways, that a movie can express “this is dangerous but it’s really important to Braun for some reason.” And it’s the “for some reason” part that becomes the “me” problem, because Mattila seems so determined to lionize for Braun for pursuing this risky dream that he never once interrogates whether or not it’s a deeply stupid thing to do for this husband and father of four. Braun seems like a solid guy, and there are moments of insight into the differently-wired fraternity of guys who face bodily harm daily on the job. This rocket launch, however, isn’t even a job. All of the endless build-up to Braun’s slo-mo The Right Stuff hero walk to the platform is in service of a shallow character study that manages to capture history from a dozen different angles without bothering to ask “why.” Available July 23 via Disney+. (NR) 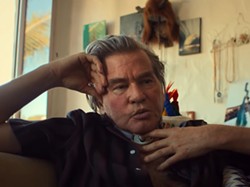 Val ***
There’s a value at times in recognizing the difference between “a good movie” and “a movie I was consistently interested in watching.” The latter applies much more than the former to this documentary from directors Leo Scott and Ting Poo, which tracks the life of actor Val Kilmer from his childhood in Southern California through his professional career and up to the battle with throat cancer that has taken away his voice. The latter development requires Val’s narration to be spoken by his son, Jack Kilmer, and that bit of distance is simultaneously a reminder of his current circumstances and an impediment to understanding how Val himself feels about pivotal events, like the death of one of his brothers as a teenager. The biggest draw, though, is the video Val shot throughout his life, including on-set, behind-the-scenes stuff from Top Gun, The Island of Dr. Moreau and more. It’s an unusually rich trove of archival material from which to draw, even if it’s sometimes awkwardly integrated with the contemporary footage. Do the filmmakers spend much time interrogating why Val was such a compulsive self-chronicler, or the truth behind his reputation as “difficult,” or finding a shape for their raw material? Not particularly, but sometimes the raw material is enough. Available July 23 in theaters; Aug. 6 via Amazon Prime. (R)