New releases by Racist Kramer, Crook and the Bluff 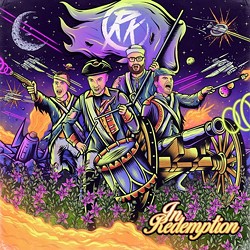 Racist Kramer, In Redemption
Really fast punk music is the easiest and fastest way to describe SLC’s Racist Kramer. Tinged with touches of good old-fashioned pop punk and a dash of ska (“Radio Destructo”), their new album In Redemption, released July 24, is a relentless onslaught of driving drums, guitar lines with zing and a whole lot of confidence for a band part of a generation where “nobody got paid.” It’s safe to wager that Racist Kramer is made up of aging millennials, based on the titles of tracks like “Fun Bus” and their general existential exasperation, a common trait of the fucked-over gen. On “Fun Bus,” all of their friends are dying prematurely, alongside their heroes, adding salt to the wounds that fuel this fiery album. It’s a hard-slung sequel to their last full-length release, 2005’s Six Pack with a Sidecar, which came out around the time that the band’s namesake was born—as in, actor Michael Richards, who played Seinfeld's Kramer, denying that he’s a racist (he is). In Redemption is an angry album (there’s even a song called “Angrier Days”), but feels like the kind of tightly controlled anger of a person who’s aged up a bit, and it translates to the production and song construction, too. Listen to this newest from a classic SLC band on Spotify.

Crook and the Bluff, Monolith
And the band's Monolith precedes the viral ones recorded popping up in the Utah desert all of last summer. Theirs has got more staying power, too, as a stimulating addition to their discography and a triumphant follow-up to their debut album, 2015’s Down to the Styx. While that first album was a spare and wandering experiment in psychedelia, this newest effort took one-and-a-half years to complete, because each song—as they’ve stated—translates its own imagery and sonic landscape. Released July 30, it’s a psych rock album at its heart, though it wanders all over the place. Each track delivers up something new and compelling, with pacing that keeps one’s ear eager to see which corner they’ll turn next. Second track “Booze Tooth” is a quirky slow-burn, building darkly with funky basslines and a blackout vocalist Kirk Dath can feel coming. He sings about a sickly encounter with repeated late nights with no sleep and a glass of scotch in hand in the biggest little city in the world; he sings low and clipped, “I don’t wanna die but it’s almost like they pay me to.” The song seems to reference the life of endless, gruelling tour that musicians face, and at the end of the song, Dath muses, “Are these the pearly gates, or just the spotlight?” Elsewhere on the album, their self-proclamation that the writing of the album was a “sisyphean task” is proved right by way of the delicacy and richness that’s present everywhere. Tracks like “Ballad of Blue 52” recall the high drama of ‘80s rock romanticism—very specifically for its precise deployment of elements like horns, spare but bold guitar parts and bellowing vocals. Other songs like “Tennessee Storm” and “G.T.T” present a little more rough and rockin’ attitude, the former with some Southern flare mixed in and the latter with some grinding, low and heavy guitar parts almost reminiscent of grunge. I hope Crook and the Bluff are celebrating this strong release, because it’s a success. You can find it wherever you stream.