Candyman, Vacation Friends, He's All That and more 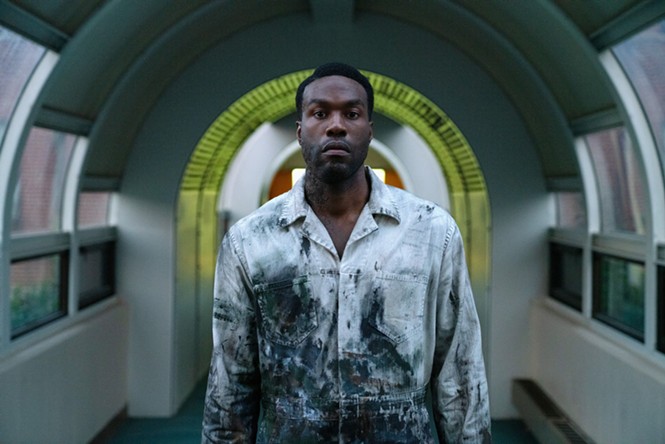 Ailey ***
It’s not always easy coming up with a framework for exploring a great artist’s life, but director Jamila Wignot gets a great framing structure: Watching other artists influenced by the master explore his legacy. The subject is the late dancer/choreographer Alvin Ailey, founder of the Alvin Ailey American Dance Theater and pioneer in bringing both Black themes and Black faces to contemporary American dance at a time when both were few and far between. Wignot leans heavily on archival footage of performances from landmark pieces like Revelations, providing a strong sense for the work itself as interviews with Ailey’s collaborators provide context. But we also see choreographer Rennie Harris preparing a production celebrating the 60th anniversary of the company, allowing for a powerful sense of continuity and a recognition of Ailey’s contribution to his art form. While historical interviews with Ailey allow for a sense of where he came from, there’s a bit of a gap in understanding him as a person, with only token exploration of his mental health struggles or his choice to remain mostly closeted as a gay man, including hiding from his public obituary that he died of AIDS-related causes. Still, for a movie meant to celebrate what Ailey created, and how his creations inspired and moved others: mission accomplished. Available Aug. 27 via SLFSatHome.org. (NR)

Candyman ***
Let’s get one thing out of the way: I’m not remotely qualified to weigh in on whether this new collaboration from producer/co-writer Jordan Peele and director/co-writer Nia DaCosta nails its themes about the connection between urban legends and real-world suffering. But even if it doesn’t, it’s an impressive piece of filmmaking. Following on the established universe and characters of the 1990s horror franchise, this reboot deals with a Chicago-based artist named Anthony (Yahya Abdul-Mateen II) who becomes inspired to create work involving the city’s Cabrini Green housing projects, and their connection to tales of a supernatural killer. Peele and DaCosta go all in on linking the Candyman mythology with violence against Black bodies—e.g. “Say His Name” and Black Lives Matter’s “Say Their Names” slogan—while incorporating issues of gentrification and cultural appropriation. If those ideas end up having power, it’s largely because DaCosta brings a visual sensibility that turns gory set pieces on their ear, and unsettles with half-glimpsed images and hard cuts from what you’re sure you’re just about to see or hear. The sound design adds even more to the tension, from the background drone of bees to the warning click of a door lock. Yes, there’s stuff to think about here, but there’s also a lot of great stuff to watch. Available Aug. 27 in theaters. (R)

He’s All That **1/2
Sometimes there’s no more concise descriptor for a movie than, “Aw, that was cute.” The 1999 teen comedy She's All That gets a gender-swapped updating, as high-school senior and social-media star Padgett Sawyer (Addison Rae) faces a public humiliation, and can only re-establish her “brand” as a makeover queen by turning sullen classmate Cameron (Tanner Buchanan) into a hottie. The premise is just as patently silly here as it was 20 years ago in terms of how much work actually has to be done on the story’s theoretical ugly duckling, given that Cameron removes his shirt early on to reveal the ripped abs underneath. Fortunately, director Mark Waters (Mean Girls) still understands the milieu of adolescent drama, and the screenplay by the original film’s writer R. Lee Fleming provides a foundation for the solid chemistry between Padgett and Cameron. Mostly, the cast is plenty appealing: Rae and Buchanan warm and charming; Isabella Crovetti a star in the making as Cameron’s younger sister; Rachael Leigh Cook, who isn’t just nostalgic stunt casting as Padgett’s single mom. The cover of Sixpence None the Richer’s “Kiss Me” comes around at the climax just like clockwork, right about the time that you’re ready to intone, “Aw, that was cute.” Available Aug. 27 via Netflix. (NR)

Not Going Quietly ***
It’s a lot easier for a documentary profile of someone with a disability to avoid the “brave and inspirational” pitfalls when the subject is as salty and down-to-earth as Ady Barkan. Director Nicholas Bruckman follows Barkan—an attorney and progressive activist whose life was thrown a curveball after he was diagnosed with ALS in 2016—over the course of two eventful years, during which Barkan’s physical condition deteriorates, but his commitment to challenging the developments of the Trump presidency never falters. Most of the film is devoted to Barkan’s attempt to defend threats to the Affordable Care Act, as well as nationwide tour getting in the faces of Republican legislators leading up to the 2018 mid-term elections, and it’s predictably satisfying watching Barkan and his partner-in-crime, Liz Jaff, plot their social-media-friendly activities. It’s also a significant subtext that Barkan is engaging in all of this activity at the expense of time with his wife and young son, which easily could have turned into the part in a biopic where the long-suffering spouse cries, “What about us?” But there’s no such melodrama here, despite the difficult decisions Barkan faces as he loses his ability to speak, because his wicked sense of humor leavens the potentially maudlin moments. And it really is hard not to see how much he’s willing to sacrifice for others and ask yourself, “What am I prepared to do?” Available Aug. 27 at Megaplex Gateway. (NR) 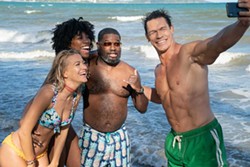 Vacation Friends **1/2
It’s a well-worn comedic premise—a tightly-wound protagonist stuck in some crazy scenario with a more free-spirited counterpart—that depends almost entirely on the chemistry between the leads, and it’s just a touch out of balance here. Lil Rel Howrey plays Marcus Parker, whose Mexican vacation with his girlfriend Emily (Yvonne Orji) is planned for a romantic wedding proposal, but goes sideways when they meet Ron (John Cena) and Kyla (Meredith Hagner), a duo of rampaging carpe diem enthusiasm. The multi-credited script—including the Horrible Bosses team of Jonathan Goldstein and John Francis Daley, along with director Clay Tarver—serves up several solid situations, and Tarver has a facility for turn gags that could easily have been underlined into throwaway moments. But while Cena and Hagner are terrific as the pure-id side of the equation, Vacation Friends is never quite as successful at deciding if Marcus really is in need of changing, or what role Orji’s Emily is meant to play besides reaction takes. The story ultimately introduces one too many antagonists in Marcus’s future in-laws, meaning there’s ultimately less time available for our odd couple to do their oddest coupling. Available Aug. 27 via Hulu. (R)

What We Left Unfinished **1/2
An intriguing film history footnote here becomes something that feels like a footnote stretched out to a 71-minute feature. The subject is the films created under the nationalized film industry of communist-era Afghanistan ca. 1978-1991, specifically several films that were never completed as a result of changes in regime. Director Mariam Ghani includes a few fascinating anecdotes about that period, including tales of dangerous film shoots where fake soldiers ended up exchanging gunfire with real mujahideen. But it ultimately feels like there’s really only one point being made here—filmmakers of that era had infinite resources to make their movies, provided they told the pro-government stories the government wanted told—and that point is made over and over again. It doesn’t help that the footage from the “lost” films that we see here is rarely interesting in the out-of-context, generally dialogue-free snippets that are presented, making it hard to understand either what kind of propaganda was being disseminated, or whether the fact that these movies remain incomplete amounts to any kind of tragedy. Particularly in a moment when Afghanistan is once again falling into chaos, it would have been nice to have something that felt like it was providing a fuller picture. Available Aug. 27 via SLFSatHome.org. (NR)